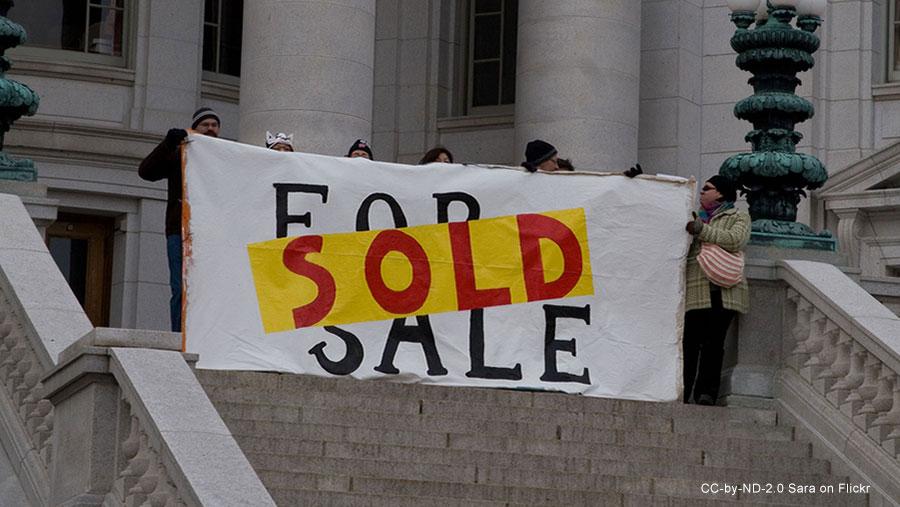 The far-right Wisconsin Supreme Court already handed Governor Scott Walker a "get out of jail free card" when it called a halt to the John Doe criminal probe into campaign finance violations by Walker and his team of advisors during the 2011-2012 recall elections.

Now, the Wisconsin legislature is going the extra mile with three separate bills to retroactively decriminalize the behavior at the heart of the investigation and to defang the nonpartisan elections agency that aided it.

The first will allow candidates to directly coordinate with big money "issue ad" groups that keep their donors secret--allowing politicians to form their own shadow campaign committee, and then ask billionaires and corporations from around the country (or even overseas) to contribute million-dollar checks, without any public disclosure. The second will destroy the nonpartisan Government Accountability Board, widely regarded as a "model" for the nation, that assisted prosecutors in the Walker investigation. The third will exempt politicians as a category from these types of corruption probes.

Legislative leaders are calling it an overhaul of the state's campaign finance laws, but it really isn't campaign finance at all. Wisconsin should inaugurate new chapters in the statutes including "Facilitating Secret Money in Wisconsin Elections" and "Protecting Politicians from Independent Oversight and Accountability."

In a 4-2 July decision that broke along ideological lines, the Wisconsin Supreme Court's right-wing majority ended the John Doe probe into whether Governor Scott Walker illegally coordinated with supposedly "independent" secret money groups during the recall elections. The Court declared that any coordination that did occur didn't violate the law, since it only involved so-called "issue ads" that stopped short of expressly saying "vote for" or "vote against" a candidate. The Court additionally ignored evidence that Walker's team had also engaged in coordination with express advocacy groups.

By ruling as it did, the Court overturned years of precedent and practice in Wisconsin. Previously, one of their own colleagues, Wisconsin Supreme Court Justice Jon Wilcox, was fined $60,000 for engaging in the same type of issue ad coordination that Walker engaged in. But the state's highest court, elected with over $10 million in support from the same dark money groups under investigation in the Walker probe, was anxious to create new rules.

On Wednesday, GAB Chairman Judge Gerald Nichol, a former Republican District Attorney appointed to the board by Scott Walker, said the justices should have recused themselves.

Nichol told Wisconsin Public Radio: "You get off the case, and that protects the system. It gives it integrity. And right now, I think the Supreme Court has a problem with their integrity."

"Most judges in this state who I've talked to are appalled by that decision," Nichol added.

The justice's failure to recuse may yet be challenged before the U.S. Supreme Court, which in 2009 held that a West Virginia Supreme Court Justice should have recused under similar circumstances, but by then Nichol and his colleagues will be off the board and Wisconsin campaign finance laws will have been dramatically rewritten.

Under the bill, there is nothing stopping a candidate from forming a nonprofit, having it operate out of their campaign offices, and asking billionaires and corporations from around the country (or overseas) to contribute million-dollar checks, without any public disclosure. Donors who max out on their contributions directly to campaigns (currently limited to $10,000 per gubernatorial candidate) will have a new conduit for giving money, with the full knowledge of the candidate, but no disclosure to the public. Corporations could support Wisconsin candidates without public disclosure. Special interests seeking political favors—but not public scrutiny—can curry favor with candidates without questions from the media.

At the same time, the bill doubles the contribution limits for individuals to give directly to a candidate, but these smaller donations would have to be disclosed.

Elections law expert Tara Malloy with the Campaign Legal Center told CMD: "By allowing outside groups to coordinate all spending except express advocacy expenditures with their favored candidates, the bill offers big spenders a clear route to circumvent Wisconsin’s contribution limits. This approach is by no means constitutionally compelled. No federal court has recognized a First Amendment right to engage in this this type of coordination. Not even the U.S. Supreme Court in Citizens United. In fact, the Supreme Court has explicitly recognized that a state can go beyond express advocacy in restricting coordinated spending."

But Vos, who got his start in politics in the office of GOP assembly leader Bonnie Ladwig one of the legislators charged in the "caucus scandal," now apparently wants to make his mark on history by handing over full control of state campaign spending to corporations and special interests acting in secret.

What could go wrong?

Getting Rid of the GAB, an Independent Election Board Is No Longer Needed

Vos' campaign finance deform measure came the same day that the GOP dropped a bill to get rid of the independent elections and ethics board.

The bill will do away with the non-partisan retired judges who sit on the GAB board and weigh-in on every major decision. Judge Nichol and the other judges (the majority appointed by Walker) will be out on the street and partisan appointees will take their place.

Nichol warned that dismantling the board shortly before the 2016 presidential elections was rash and ill-advised. "The public and the agency's customers will not be well served by rushing through a sweeping reorganization at this point in the election cycle," he wrote to legislative leaders. The board had its hands full implementing Voter ID and other changes demanded by Republicans. The board "makes its own decisions guided by the law, not partisan politics," he wrote to legislative leaders.

But his warning falls on deaf ears. The Wisconsin GOP appears ready to rush the GAB reform bill and changes to the campaign finance system through the legislature. Speaker Vos and over 23 other legislators who voted to create an independent overseer of Wisconsin elections will now have to reverse course. (See the list here.)

The final folly in the trinity of bad ideas is a bill that would prohibit Wisconsin's John Doe statute, which lays out a process similar to a grand jury but operating in front of a judge, from being used to investigate political corruption. The broadly written bill authored by GOP Senator Tom Tiffany (R-Hazelhurst) would only allow the statue to be used for serious, for instance violent, felonies and would apply time limits and other restrictions making it unworkable.

Former Milwaukee District Attorney E. Michael McCann, testified that the new bill was so poorly written that prosecutors would no longer be able to use the law to investigate identity theft, mortgage fraud, certain drug offenses, theft reaching into the millions of dollars, perjury as well as political corruption and campaign finance and ethics law violations.

The End of an Era of Good Government

Wisconsin's campaign finance laws were enacted after the Watergate scandal rocked the nation. Now the language that ushered in a 30-year era of transparency and fair play in Wisconsin politics is being jettisoned.

The Vos bill eliminates the preamble of the state’s campaign finance law, which includes: “our democratic system of government can be maintained only if the electorate is informed,” “excessive spending on campaigns for public office jeopardizes the integrity of elections” and “when the true source of support or extent of support is not fully disclosed, or when a candidate becomes overly dependent upon large private contributors, the democratic process is subjected to a potential corrupting influence.”

That's right, an informed electorate is no longer a goal of Speaker Vos and the Wisconsin GOP, which has now made multiple attempts to gut the state's open records law.

"The net effect of this plan is effectively the complete deregulation of campaign finance law in Wisconsin, including any meaningful transparency or disclosure. Much more money, in much larger amounts will flow and Wisconsin voters will be relegated to the sidelines," says Wisconsin Common Cause director Jay Heck.

UPDATE: There will be a public hearing Tuesday, October 13, 9:00 a.m., Rm. 412 East in the Wisconsin State Capitol on three bills: SB 295 to deconstruct the GAB, SB 292 the campaign finance deform bill, and SB 295 related to electronic voter registration.