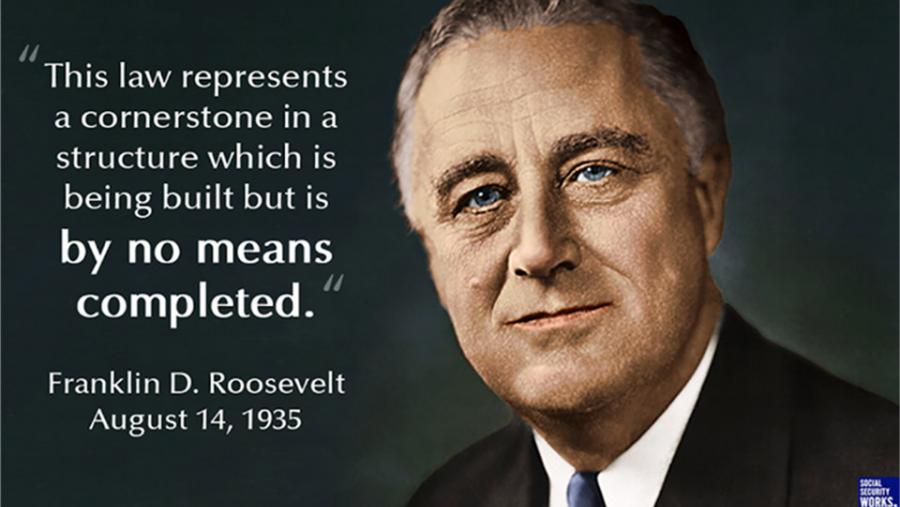 Social Security is one of the most popular and successful government programs in U.S. history. For 80 years, in strong and weak economic times, Social Security has benefited every individual who has paid into it upon reaching retirement age, protecting millions of Americans from poverty.

Despite such a strong record, Social Security is under attack from profiteers and their political allies who claim it will not be around when people retire and is in need of drastic reform. A myth, says the Economic Policy Institute (EPI) since "Social Security is fully funded through 2033. Even if nothing is done to shore up the system, Social Security can continue to pay three-fourths of promised benefits after the trust fund runs out. Though this would be far from ideal, it's certainly no reason to preemptively cut benefits." A decrease in Social Security benefits would leave over half of elderly Americans in poverty, hitting African Americans, Latinos and women the hardest.

Because Social Security is such a large public sector program, with almost $3 trillion in reserves, Wall Street has long wanted to get its hands on it. Various proposals to privatize or partially privatize the program would allow investment firms to run up fees for every transaction, profiting off of retirees and making the program vulnerable to economic crashes.

National People's Action, a grassroots organization which fought for average Americans during the Wall Street financial crisis, reminds presidential candidates and policymakers that since the 2008 crash the program is needed now more than ever. "Americans are facing an unprecedented retirement security crisis. Right now, we have a $7.7 trillion retirement savings gap – meaning that for the first time in our country's history, current and future retirees are preparing for a lower standard of living in retirement than their parents. And, with 38.3 million working age households with zero retirement savings, our elected officials must look for ways to expand the only guaranteed source of retirement security: Social Security." The group has launched a petition calling on all federal policymakers to keep Social Security strong.

Below we run down some of the program changes supported the top candidates for the 2016 U.S. presidential election:

Jeb Bush: Bush wants to privatize Social Security and raise the retirement age. "I think we need to raise the retirement age, not for people that are already nearing, receiving Social Security, or already on it, but raise it gradually, over a long period of time for people that are just entering the system. And I think we need to do that in relatively short order."

"My brother tried (to privatize Social Security), got totally wiped out," Bush said. "Republicans and Democrats wanted nothing to do with it. The next president is going to have to try again."

Former President George W. Bush attempted to pass Social Security reforms in 2005 that would have allowed younger people to set aside retirement funds in private accounts which would make money off of stocks, bonds and other types of financial investments. This plan struggled to gain support on both sides of the aisle and was never voted on in Congress. Fortunately, for if implemented, Politico has reported that "seniors' savings tied to the stock market would have lost on average 40 percent of their value" after the 2008 Wall Street meltdown.

"The reforms I would like to see -- and I'm campaigning on fundamental reform to preserve entitlements. We ought to gradually increase the retirement age. We ought to change the rate of increase in benefits so that it matches inflation, rather than exceeding inflation…And third -- and this is critical -- we ought to allow younger workers to keep a portion of their tax payments in a personal account that they own, that they control, that can grow at market rates, and that they can pass on to their kids and grandkids."

Ben Carson: Carson wants to raise the retirement age. "The age at which benefits are distributed should be gradually raised. I stress the word gradually because people must be given a chance to adjust their plans and expectations."

Marco Rubio: Rubio wants to open the federal Thrift Savings Plan, a retirement plan for federal employees, to all citizens who do not have a plan provided by an employer; eliminate the Social Security payroll tax for those over retirement age; and raise the retirement age.

"I propose we give Americans who do not have access to an employer sponsored plan the option of enrolling in the federal Thrift Savings Plan. Opening Congress' retirement plan to the American people will allow us to bring the prospect of a secure, comfortable and independent retirement into reach of millions of people."

"...we should eliminate the 12.4% Social Security payroll tax for all individuals who have reached retirement age. These seniors have already paid their fair share, and we shouldn't punish them for choosing to keep working rather than immediately cashing in." "The answer is to gradually increase the retirement age for future retirees to account for the rise in life expectancy."

Scott Walker: Walker wants to privatize Social Security for some, but leave it unchanged for those close to retirement.

"I was born on November 2, 1967 and so the reason I say that is that anyone older than me should be protected," Walker said. "The cinch should be, 'hey you made plans for your retirement no matter who you are, no matter what your background, no matter what your income, you made decisions about your retirement based upon a commitment that the government had made, a commitment to people to say you worked this many years under the system and that ultimately this is where Social Security and Medicare are going to be at.' I think those individuals should be protected going forward...For people my age and younger, we live in a whole different world. We live in a 401K society, we're ready for reform. I think we think it's realistic not just for ourselves but our children and someday our grandchildren that we put in place reforms."

Carly Fiorina: Fiorina wants to raise the retirement age. "When we are satisfied that we don't have hundreds upon hundreds of billions of dollars of waste, abuse, and corruption, then let's start talking about raising the retirement age for Social Security."

"At a time when over half of the American people have less than $10,000 in savings and senior poverty is increasing, we should not be talking about cutting Social Security benefits. We should be talking about expanding benefits to make sure that every American can retire with dignity."

"The most effective way to strengthen Social Security for the future is to eliminate the cap on the payroll tax on all income above $250,000 so millionaires and billionaires pay the same share as everyone else."

A Simple Change Protects the Program for the Long Term

In order to ensure that Social Security remains strong for another 80 years and beyond, the program does not have to be privatized and the retirement age need not be pushed back, say experts. The simplest route to a strong and expanded Social Security system is a lifting of the cap on the Social Security Income Tax. This solution is widely supported by the American public as EPI has noted, "Americans across political and demographic lines support paying Social Security taxes and prefer raising taxes over cutting benefits as a way to close the projected shortfall. A popular option is raising taxes on high earners, since earnings above $117,000 aren't taxed. But Americans prefer to close the gap on the revenue side even if they're asked to pay more themselves."

Democratic candidate Bernie Sanders supports this and Hilary Clinton seems open to raising the cap as well. Not one GOP candidate has come out in support of the idea.

Since all presidential candidates are for making changes to Social Security, the future of the system--and what reforms will take place--is in the hands of voters.

Though over-all life expectancy has increased over a decade since Social Security was established, life expectancy for people who have already attained the age of 60 or 65 has increased about 4-7 years depending on sex and race. We've already raised the SS retirement age by two of those years. Also, just because people are living longer, it doesn't mean they can actually work full-time those extra 2-5 years, especially if they are working physically or psychologically challenging jobs. And, if they lose that job at age 62-63, what are their chances that anyone will hire them for the last 5+ years of their working life?
I don't believe the baby born today will have a longer life span than their parents. Raising age ultimately means next generation pays in longer and collects less. Which is the goal of any insurance ponzi. . .