Scott Walker Is the Belle of the ALEC Ball | PR Watch

Scott Walker Is the Belle of the ALEC Ball 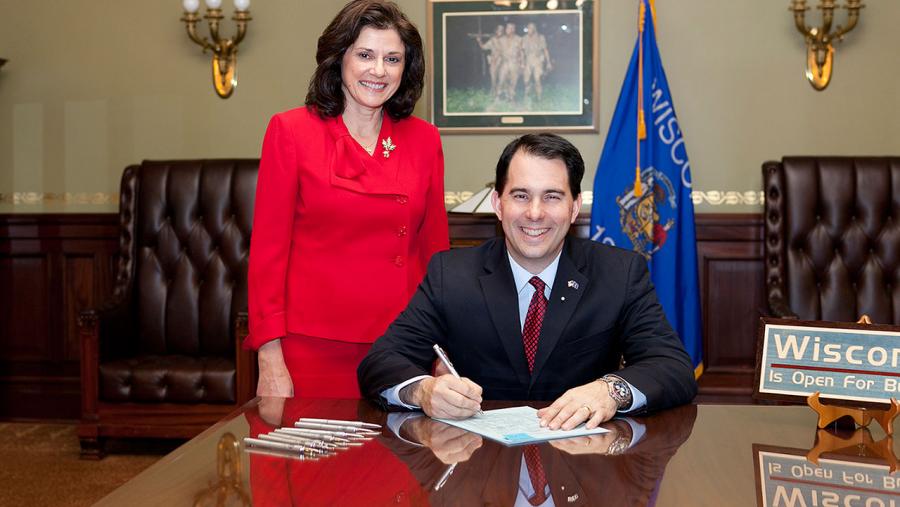 Wisconsin has become the new ALEC darling, and took center stage on the second day of the 42nd ALEC conference. It is easy to see why. Since the 2010 Tea Party takeover of our state, a deluge of ALEC model bills have become law, from policies to privatize public education to the hallmark, anti-worker package of laws that launched Scott Walker into the national spotlight and now provides his basis for running for president.

And then there is ALEC golden boy Scott Walker, the keynote morning speaker at the morning breakfast.

Wisconsin Senator Leah Vukmir, a former nurse who is soon to become the chairwoman of the ALEC board and an ALEC darling herself, set the stage when she introduced Governor Walker by referring to the "unhinged wrath" of protestors who engaged in "unprecedented vile behavior that lasted for weeks and weeks." Hmmm. I was there, with my five-month-old baby and my 4 -year-old, holding our homemade signs. It was the most peaceful collection of thousands of people in Wisconsin's history.

But the ALEC crowd eats up this Republican fiction they use to describe the massive public opposition to their signature law and the main reason Scott Walker is now running for president—eviscerating public sector unions in Wisconsin. Though the ALEC crowd rallies around what they believe are First Amendment rights of their dark money friends to spend unlimited amounts of secret money to influence elections, the actual exercise of true speech is harder for them to swallow. Protestors outside the ALEC meetings, a regular occurrence, are routinely described by attendees in the most derogatory words and are used by ALEC to underscore their victimization by the left.

And this is the false narrative that frames Scott Walker's presidential campaign. First fiction—"We did what we said we would do." Actually, Walker never said when he first campaigned for Governor that he would put in place most of the ALEC policies he did, starting with dismantling unions.

Second fiction – "The big government special interests believe that they can win by intimidating." I’m sure that the sheer numbers of people who turned out to protest against Walker’s Act 10 scheme must have been intimidating, which the Governor seriously underestimated. If anything, this is more a reflection of how out of touch he is with the people of his state. But the people who were there were school teachers, firefighters, environmentalists, parents, farmers, sheet metal workers. This was a Wisconsin occurrence, led by Wisconsin people for whom Governor Walker has the utmost disdain.

Scott Walker's other fiction is acting like his signature policy agenda which he lists off, including making it harder for injured people to sue corporations, Right to Work, the Castle Doctrine, and Voter ID, came from him. Even at the ALEC conference, he failed to underscore that in fact, these were all signature ALEC policies well before he got to the Governor's office. As a former ALEC member, he is well aware that he lifted these policies, yet never even gave a nod to ALEC's influence on him as a policy maker.

After Walker's speech I asked those at my table what they thought. A legislator from Oklahoma said he had already endorsed Walker. The wife of one of the attendees gushed that he was their guy. When I responded it was too bad our economy wasn't doing better and that our private sector job growth lagged behind the rest of the nation, they didn't blink an eye. Creating actual economic growth, supposedly a hallmark at ALEC, did not seem to be a priority in the presidential candidate ALEC attendees were supporting.

ALEC and Governor Walker are similar not just in the policies they push, but in their process and focus. ALEC's process and policy agenda doesn’t come from the people and doesn't benefit actual people. At ALEC, it's about circumventing those people so ALEC corporate members can maximize their profits by privatizing what is public.

And for Scott Walker, as was so evident as I sat and listened to his speech, it's not about you, but about him. Walker is the ultimate "me" governor. His last universally scorned Wisconsin budget proposal made that clear. His words today made it even clearer.

State Representative Chris Taylor, a Democrat, represents the 76th District in the Wisconsin State Assembly. This is her second report from ALEC's San Diego meeting. Click here for the first installment.

I too was a frequent protestor at the Capital on those cold winter days. I remember signs, songs, children, pizza young and old and a great deal of camaraderie as people walked around the square sharing stories and chanting slogans. I only saw one unintimidated conservative member of the legislature, Glen Grothman. We greeted each other and went on our way. I only heard vile words from 2 people..Vicki McKenna and Sarah Palin.
Thanks for being there, Chris. It's so frustrating that our laws are being written by this group that is supported by billionaires. And since Vukmir is going to be leading them, it is a conflict of interest for her to also be in the Wisconsin senate. She should resign her seat.
Thanks, Chris, for continuing to inform us about ALEC and hanging in there against the Republican majority and its crushing of the public interest and promotion of all things corporate and private. Without the EPA, and the attacks here on the DNR, it will be difficult to watch what is happening to our environment, and of course the other issues in the state.