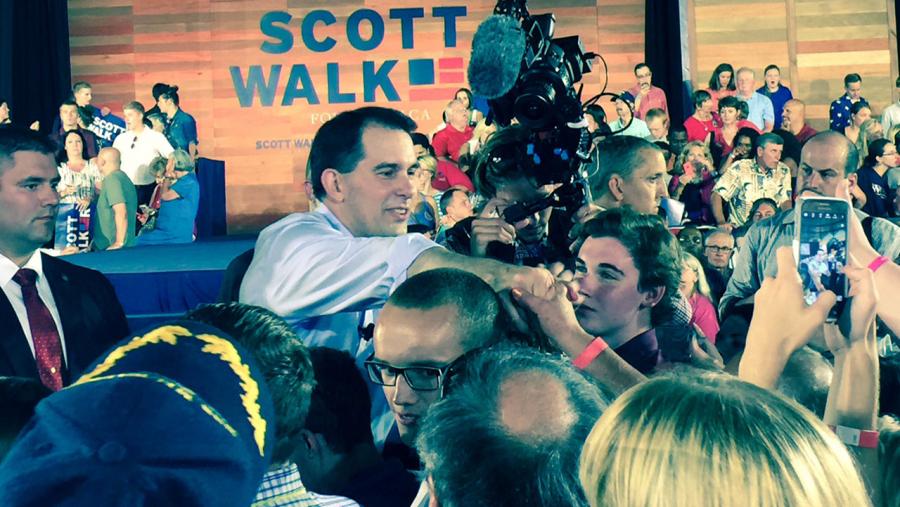 WI--With Rascal Flatts' cover of "Life is a Highway" blasting through the speakers, Wisconsin Governor Scott Walker took to the stage at the Waukesha Expo center to the cheers of thousands of enthusiastic followers. Walker is hoping that faith, family, and his history of a "David and Goliath" battle with unions will pave his way to the White House.

Fans Gather from Near and Far to Hear Walker

It was hot in the parking lot as thousands waited in line to get into the Expo Center.

The Center for Media and Democracy spoke to a passel of Congressional interns who had come in from Illinois. "Walker is one of the few GOP candidates I am excited about," said Daniella Propati. "Immigration is really important to me. I believe in a legal path and people should wait their turn," she said. While Donald Trump this week turned out thousands on the topic of immigration at a rally in Arizona this week, oddly Walker did not mention the issue once.

A tall gentleman wearing a distinctive replica of Ronald Reagan’s hat, bought at the Reagan library, flew in from out of state to join the festivities for Walker. “He is a steady guy who is working hard for the people. I don’t have a college degree either, but I built my business from scratch and succeeded,” said Dave Meister, who developed an encrypted messaging mobile app called Blue Sky. Asked if he had a piece of advice for Walker, Meister said, "Be yourself, don’t let the handlers manipulate you, stand for what you believe in."

Gary McNett from Waterford was a long-time Walker supporter. He was worried that Social Security would not be there for his children or grandchildren. He thought the program "needed to be fixed along the lines of what Paul Ryan is talking about." He wants people to be able to invest a portion in the stock market. When asked if he worried about stock market crashes, McNett said "well sure, but those will always be there."

Many Walker supporters were there because of his views on abortion. Alycia Johnson told CMD, "I work with women who have unplanned pregnancies and women who have had abortions previously, so I really like his pro-life views."

A crowd of a few hundred protesters greeted the Walker supporters at the gate with signs declaring "Scott Walker High on Koch, Low on Jobs."

Walker's surrogates made repeated references to his battle to fight the "special interests" and overcome the recall. But Lt. Governor Rebecca Kleefisch had the most interesting remarks, repeatedly framing the recall race as a heroic effort, which they battled together with God on their side.

"Remember when the special interests came to take your voice away? In a Herculean effort, a David and Goliath battle, [Walker] gave you, he gave America your voice back," said Kleefisch.

"We knew there would be one moment when the protesterate would file" their recall petitions, she said, "but do you remember the mystery when someone took out papers to recall just the governor?"

On that day, Kleefisch explained, she texted the governor Jeremiah 29:11. "For I know the plans I have for you," declares the Lord, "plans to prosper you and not to harm you, plans to give you hope and a future."

Walker, whose faith has been the subject of numerous articles, texted her back Isaiah 54:17. "No weapon that is fashioned against you shall succeed, and you shall refute every tongue that accuses you. This is the heritage of the servants of the LORD and their vindication from me."

When Walker took to the stage he began with a simple "I love America." But the word "fresh" was a recurring theme for the governor who has run 25 primary and general elections in 25 years. “We need new, fresh leadership, leadership with big, bold ideas from outside of Washington," Walker said to cheers. And when it came down to policy prescriptions: "We want to build the economy from the ground up in a way that is new and fresh, organic and dynamic."

His first idea was to again attempt to repeal the federal health care bill that has already extended health insurance to 16 million Americans and is slated to cover 27 million by 2019. "We need a President who--on the first day in office--will call on Congress to pass a full repeal of ObamaCare," said Walker. Politico reported that the Koch brothers spent hundreds of millions bankrolling grassroots opposition to the federal health care bill.

Next, Walker wants to "rein in the federal government's out-of-control regulations that are like a wet blanket on the economy. Then, "put into place an 'all-of-the-above' energy policy that uses the abundance of what God has given us here in America and on this continent," said Walker. "We need a President who will approve the Keystone pipeline on the very first day in office."

As he has done before, Walker used his tough talk on unions to segue into tough talk on foreign policy. "The greatest threat to future generations is radical Islamic terrorism," said Walker.

Hailing Wisconsinite Kevin Hermening, who spent 444 days as a hostage in Iran and was invited to the kickoff, Walker said: "Looking ahead, we need to terminate the bad deal with Iran on Day One, put in place crippling economic sanctions and convince our allies to do the same." After the September 11, 2001, terrorist attacks, Hermening penned an op-ed piece for the Milwaukee Journal Sentinel in which he advocated "a prompt and massive military response that includes the destruction of the capitals of Afghanistan, Iran, Iraq, Lebanon, Libya, Sudan and Yemen (unless they agree unequivocally to support our efforts to kill Osama bin Laden)."

This morning, President Obama announced that world leaders had struck a deal to curb Iran's nuclear program in exchange for billions of dollars in relief from international sanctions. The agreement is designed to avert the threat of a nuclear-armed Iran and another U.S. military intervention.

The Minimum Wage Is a "Lame Idea"

Walker’s announcement was followed by an interview with Fox’s Sean Hannity, where among other things Walker criticized the minimum wage as a "lame idea" of the left.

This is not the first time Walker has criticized the minimum wage, saying in his last campaign, "I don't think it serves a purpose." Instead, Walker would like to give people the skills to attain high-wage jobs. Notably, Walker’s 2011 anti-union Act 10 bill, combined with "right to work" and the repeal of prevailing wage, will lower wages for almost 600,000 skilled public and private workers in the state. Wisconsin ranks 40th in job growth and 42nd in wage growth.

Women Lined Up to Counter Hillary

Four female speakers preceded Walker on the stage. One Walker surrogate was there specifically to take on Clinton. Rachel Campos-Duffy is the wife of Wisconsin Congressman Sean Duffy, a Fox commentator and the spokesperson for the Koch-funded Latino group called the Libre Initiative. She spent 10 minutes pounding Clinton as wealthy and out of touch: "Could any two people be more different? Scott likes to take long rides on his Harley, while Hillary rides in a limousine."

"Walker will defend women and girls, especially the most vulnerable in the room, while Hillary will do the work of the abortion-on-demand lobby," said Campos-Duffy. This week Walker signed a ban on abortions after 20 weeks, with no exceptions for rape or incest.

Campos-Duffy also brought out a crude zinger that garnered uncomfortable titters from the crowd: "Scott has been married to Tonette for 24 years," she said. "Twenty-four, of course, is Bill Clinton’s favorite age." The New York Times reported yesterday that a multimillion dollar effort was underway, by groups like Karl Rove's Crossroads GPS, to figure out how best to vilify Clinton, so the message and techniques Walker and his surrogates are using will likely be further refined.

Although he is one of the last to official enter the race for the White House, Walker starts off as one of the top candidates in most polls. Today Walker will be at a Harley dealership in Las Vegas, Nevada, to start his long drive for the White House. His favorite devotional, Jesus Calling, has these words for July 14: "Though the path may be difficult and the scenery dull at the moment, there are sparkling surprises for you around the bend."

See a full text of the Walker speech here.