So a Lobbyist and an ALEC Legislator Walk into a Bar...Caught on Tape by NBC | PR Watch

So a Lobbyist and an ALEC Legislator Walk into a Bar...Caught on Tape by NBC 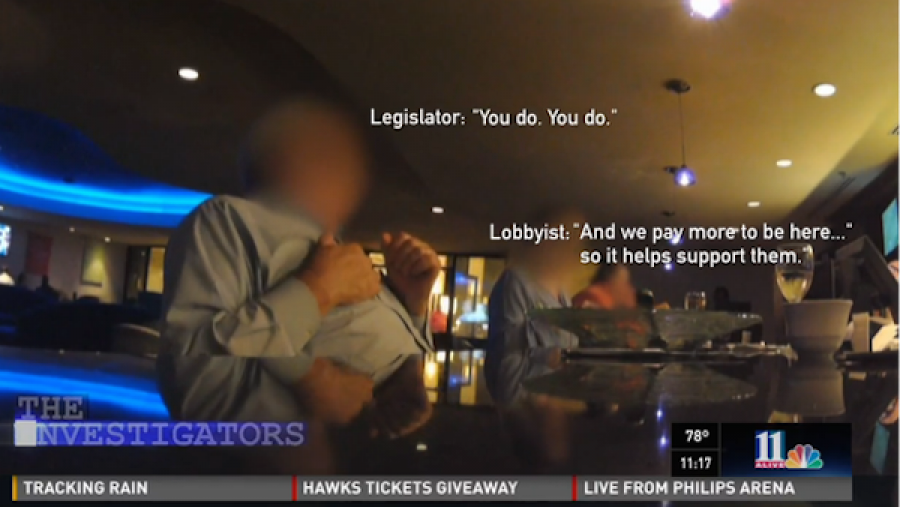 A lobbyist and a legislator got caught on tape explaining how corporations subsidize lawmakers' resort trips through the American Legislative Exchange Council (ALEC), the controversial corporate bill mill.

In a new report aired on Atlanta's NBC TV Channel WXIA 11, Georgia investigative reporter Brendan Keefe went behind the scenes at ALEC's spring meeting in Savannah, Georgia, where he chatted with lobbyists and lawmakers--and was summarily ejected by uniformed off-duty deputies for trying to film public officials at the task force meetings where future state laws are written.

A video recorded by a hidden camera caught this revealing exchange at the hotel bar:

"Do you have to pay your own way?" Keefe asked a state legislator.

"Well, on a trip like this..." he replied, then pointed to the self-identified lobbyist sitting next to him. "And that's where you would come in, ma'am."

The legislator explained that as State Chair of ALEC in his home state, he looks for "financial supporters, lobbyists and the like, to send us a couple thousand bucks every so often. That gives me money to help those folks with..."

"And we pay more to be here, so it helps support them." the lobbyist added.

"I see, so the lobbyist fees to come to the event actually help subsidize the legislator coming here?" Keefe asked.

Despite ALEC's recent claims of increased transparency and this clear video evidence, Bill Meierling, ALEC's Vice President of Communications and Public Relations, denied to Keefe that ALEC legislators are being subsidized by corporate lobbyists.

"This is a private meeting," Meierling told Keefe after being asked why reporters are not being allowed to observe legislators making laws.

"A private meeting paid for by whom?" Keefe asked.

"By our members and donors," Meierling said.

"They're not lobbyists, the ones that we recorded in the bar last night aren't lobbyists that are here as members?" Keefe asked.

Meierling then signaled to the four uniformed sheriff's deputies standing by, who proceeded to escort Keefe, who was a paying guest, out of the hotel. (CMD's reporters at the 2012 and 2013 ALEC meetings, who were also paying guests at those hotels, were similarly kicked out by uniformed off-duty police serving as ALEC security.)

Read the full story from WXIA 11 here, and watch the full report here.

Brendan Fischer and Nick Surgey contributed to this report.

Nice reporting. "Disgusting" is not sufficient to describe my angst.
I have known about this stuff for a while simply because I read alt media regularly. It still takes my breath away. This is fascism folks. (The political class gets together with the business class and decides how to run the show, in the interests of the rich and powerful corporations, while cutting out the people and telling them that as long as they have elections, then they have democracy.) This is mafia capitalism, aka neoliberal capitalism, at work. It's not what you know and do - merit - but who you know and what you do for them. And that means that you want to know those who you think have power and can protect and/or prosper you. While I do appreciate NBC's attention to this story, it's amusing to hear one of it's reporters tell the viewing public that if it weren't for them (NBC), then the viewers wouldn't know this stuff. Uh, No. Thank you Center For Media And Democracy/ PR Watch, again.
This article is not frightening. What's frightening is that after two full days, no major media has picked up and run with the story. Not even rival CNN, based in Atlanta. The news is being suppressed at times and amplified at times by a force that is far more alarming than mere and ugly corruption.