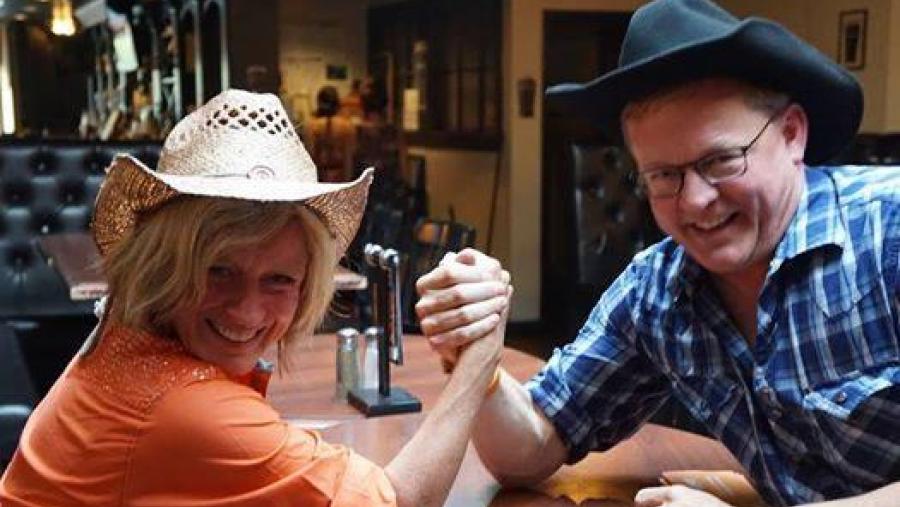 Canada's New Democratic Party (NDP) has long been The Little Engine That Could of Canadian politics. Often pushed to the margins, rarely part of the big national discussion, but always chugging along for the interests of working people, environmentalists, and a lot of others generally ignored by the corporate-friendly parties on the Left and Right.

But on Tuesday, the NDP did what would have been thought laughably impossible just a few months ago: they swept the Progressive Conservative Party from leadership in Alberta, moving from 4 to 53 seats.

To fully appreciate the accomplishment, you should know the PC, or Tories, controlled Alberta’s provincial government since 1973. For four decades the Tories had Alberta politics locked down, with only the Tea Party-esque Wildrose Party making serious rumblings against them. The number of seats the NDP held in the legislature at any one time since 1997 never exceeded four. From 1993 to 1997, the number was zero.

The Conservatives didn’t even place; they came in third behind Wildrose. Total number of seats (representing districts called “ridings” in Canada): NDP 53, Wildrose 21, PC 10, and one tie between NDP and PC awaiting recount. As far as beatdowns go, this was everything that Mayweather/Pacquiao was not--decisive, engaging, and fun to watch. NDP leader Rachel Notley and her slate even sported "Notley Crue" t-shirts. Notley is Alberta's premier designate.

To put it in perspective for Americans, it’s as if Bernie Sanders moved to Texas, assembled a slate of like-minded progressive candidates, and swept them all into the Lone Star legislature.

Why does this matter to Americans, and particularly those of us committed to stopping Keystone XL? Because the Tory government of Alberta, with help from the Conservative government of Prime Minister Stephen Harper, who cut his teeth in Alberta politics, has been the driving force behind tar sands development and infrastructure projects like KXL to get it to the global market.

The Canadian media are sure that this is going to have a profound, negative effect on tar sands projects. Relentlessly cheerleading for tar sands development (which they speciously call “oil sands” despite the fact that there’s no oil in the ground, just tar), they’re now fanning the flames of hysteria about the new government. For instance, NDP leader Notley plans to raise corporate taxes and may increase the royalties developers pay to the province for the right to ravage the land and pollute the air and water. This means, one finance guru claimed, “As an investor in the oil patch, you’re going to get your teeth kicked in.”

Industry types are quick to wave the red meat they know will arouse their base, and also spread fear in working people already facing a troubled job market. “While some groups continue to suggest Alberta should increase the royalties and corporate taxes paid by the industry, adding more costs of any kind would be irresponsible and would put more jobs at risk,” the president of the Canadian Association of Petroleum Producers wrote. It seems that anything that might possibly give the public a slight benefit from tar sands exploitation is immediately met with the threat of workforce cuts. Funny how profit margins are always protected but jobs are not.

We’ve reported many times about how the Canadian government has been pushing, cajoling, whining, and crying about Keystone XL. We’ve also spoken about how the government of Alberta has been… let’s say… less than forthcoming with the facts on the environmental and health risks from the tar sands.

Now with NDP running the show in capital, Edmonton, KXL opponents might find themselves armed with research that withstands the laugh test, and actually tells the people of Canada and the U.S. just how hazardous tar sands oil really is, from the moment it’s dug from the ground to the moment it’s blown out the exhaust pipe.

They’ll also find themselves in a policy debate that doesn’t include government-sponsored propaganda, paid for by taxpayers, and foreign government agents trying to buy legislators, while corporate shills throw money around to fake veterans groups, trained-seal scientists, and anyone else who might help them sell their dirty snake oil, a powerful one-two punch of dishonesty and dirty politics. Ousted PC Alberta premier (i.e., governor) Jim Prentice even tried to buy First Nations’ (as aboriginal peoples in Canada are called) support with promises of a share in oil and gas profits in exchange for their help persuading other provinces’ tribal leadership to make way for pipelines, as The Guardian uncovered.

Instead, they’ll just have to do battle with corporate shills. Which is a much fairer fight.

And it’s a fight they’ve handled well so far, with the Cowboy-Indian Alliance and the Native America environmental movement joining their aboriginal brethren north of the border among the forces for good showing no sign of letting up. See, e.g., the Lower Brule Sioux invoking the “bad men” clause of the 1868 Fort Laramie Treaty, and arguing that the U.S. government is now obligated to remove TransCanada from all lands protected by the treaty. Which covers about 40 percent of South Dakota.

Beyond its immediate impact on Keystone XL and the tar sands, the Alberta election is also a powerful illustration that the corporate stranglehold on politics is not unbeatable. The NDP exploited a Tory vulnerability, total reliance on oil developers, lack of a Plan B to enact when oil profits tumbled and jobs disappeared and gave the people a legitimate alternative: responsible development, smart environmental stewardship, and a government that isn’t beholden to corporate interests.

Someone in the U.S. should take note and work that plan in 2016.