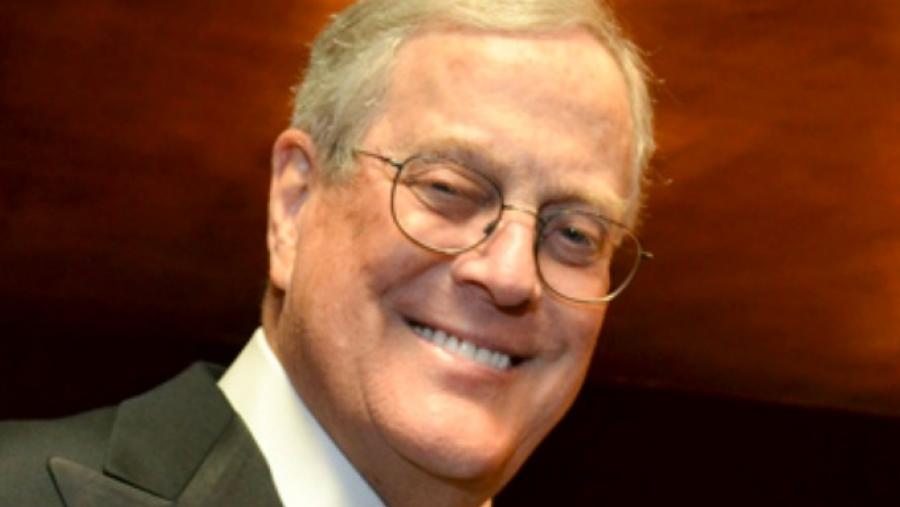 Charles and David Koch, the billionaire co-owners of Koch Industries, one of the largest privately-held companies in the world and the overseers of one of the biggest private political organizations in the country, told Republican donors in New York on April 19 that Wisconsin Governor Scott Walker is their man for President.

"We will support whoever the candidate is," David Koch said, "but it should be Scott Walker," according to an account in the New York Times.

Koch, whose political network plans to spend an astonishing $1 billion in the 2016 presidential elections, said "Scott Walker is terrific and I really wish him all the best. He’s a tremendous candidate to be the nominee in my opinion" (although he later said "I am not endorsing or supporting any candidate for president at this point in time.")

The Wisconsin-based Center for Media and Democracy (CMD) has been covering Walker--and his Koch backing--since 2011. CMD has identified at least $11.6 million in support for Walker from the Kochs and their affiliated groups, plus millions more in indirect funding.

CMD Executive Director Lisa Graves was spot-on back in February of 2011, when she reported that "Scott Walker Runs on Koch Money." KochPAC maxed-out on donations to Walker during his 2010 gubernatorial run, giving up to the $43,000 limit, and David Koch donated $1 million to the Republican Governors Association that year, which spent $5 million on the Walker race.

In his first months after taking office, Walker--a star alumnus of the Koch-funded American Legislative Exchange Council (ALEC)--signed 19 ALEC bills into law‬, which went after unions, enacted voter ID restrictions, and made it harder to hold corporations accountable in the courts. In many ways, the new pat-on-the-back by two of the biggest money men in the game is an astonishing affirmation of deep ties forged years ago at ALEC.

Walker's extreme ideological agenda prompted one million people in the state to sign petitions to recall him from office, and it was the Kochs who came to his rescue.

During the 2012 recall elections, David Koch’s Americans for Prosperity spent $10 million supporting Walker, which included at least 70 paid staffers flown into Wisconsin, plus bus tours, rallies, townhall meetings, phone banks, and canvassers, not to mention the months of TV ads.

But the kicker came in the final weeks before the recall elections. A mysterious group called "Coalition for American Values" poured $400,000 into a barrage of last-minute ads that made a unique appeal: instead of promoting Governor Scott Walker or attacking his opponent, the ads attacked the premise of the recall itself. Over pastoral images of Wisconsinites with fishing poles and tractors, viewers were told that "recall is not the Wisconsin way," and to "stop the recall madness" by voting to reelect Walker.

Despite the ads purporting to represent Wisconsin values, funding for the message came from well outside the Dairy State's borders. CMD discovered that all of Coalition for American Values' known contributions came the Koch-tied Freedom Partners.

And, the ads proved effective. Exit polls on June 5, 2012 showed that sixty percent of voters thought recalls were only appropriate for cases of official misconduct -- a complete reversal from polls conducted in November 2011, just as the recall was launched, when fifty-eight percent of voters supported Walker's recall.

“We're helping him, as we should. We've gotten pretty good at this over the years," David Koch told the Palm Beach Post in early 2012. "We've spent a lot of money in Wisconsin. We're going to spend more . . . What Scott Walker is doing with the public unions in Wisconsin is critically important. He's an impressive guy and he's very courageous."

During the same period as Walker's recall, David Koch gave $2 million to the Republican Governors Association, and Koch Industries gave $75,000 more. The RGA, in turn, spent $10 million supporting Walker during the recalls.

At a Koch donor summit in 2014, RGA Executive Director Phil Cox said that Kochs' Americans for Prosperity was a "tremendous partner" in Wisconsin and that the RGA had put $18 million into supporting Walker since 2010.

Wisconsin Club for Growth was also a major conduit for outside money during the recall elections, spending $9.1 million directly and funneling $10 million more to an array of outside groups. In 2011 they received $225,000 from the Kochs' Center to Protect Patient Rights. Its director Eric O'Keefe is a longtime Koch ally, going back to David Koch's 1980 VP run on the Libertarian ticket.

Walker is accused of illegally coordinating with WiCFG during the recalls, in an investigation that will be decided by a highly-conflicted Wisconsin Supreme Court in coming weeks.

Walker has long been the Kochs' man. Will he be the first Koch president?

Not surprising--in fact entirely predictable that Walker is the Koch's man. Meanwhile, Jeb Bush will be Karl Rove's man. And so the battle for the ideological control of the GOP will be played out in the primaries.
This is the most totally creepy individual running for President ! He is quite spooky - that left eye says it all - crafty !!
Some of that billion dollars should be spent on brain surgery.
I've seen the "Bill of Sale" for their "mouth piece" too.
We have let the Koch Brothers buy our rights......we have fallen into their 'pit'...Scott Walker is nothing more then a talking head, who lhas sold his soul to them. He is a piece of their merchandise/.
Job application: President of the United States. Needed: only puppet strings intact. Must be obstinately self serving (in line with your benefactors) and hateful toward the accomplished, smart, unfortunate and poor alike. Must have the wish to destroy environment and science. Proven service to money and corporations. No brain or humanity required; negative points will be given for presence of such traits Full, over the top, benefits and fame, with a full complement of sycophants and paid laborers to do (Y)our bidding. Comes with nice house and chef, servants and lifetime pay. You are guaranteed a generous chapter in the history of the United States in your personal library full of documents of disaster, Armageddon, the fall of the USA, the failure of democracy. No need to think about this- or anything else. Just apply with the last name of Walker
Kochs are Buying and Walker is Selling - NOTHING NEW HERE !
Thanks for your work exposing the risk of "thought censorship $$" funding state legislatures. Censoring talk of greenhouse gas environmental destruction results in sale of tribal-protected forest in Michigan's UP: http://indiancountrytodaymedianetwork.com/2015/04/14/michigan-sells-treaty-protected-pristine-public-land-limestone-mine-159996 I guess the Mackinac Center can be added to the listings on the Alec Exposed web site: From ProgressMICHIGAN November 13, 2013 press release (CONTACT: Sam Inglot, 616-916-0574, sam@progressmichigan.org): "In terms of revenue, expenses, and net assets, the Mackinac Center is one of the largest state-based conservative think tanks in the country. It had net assets totaling over $7.5 million in fiscal year 2010 and over $9.5 million in fiscal year 2011. The Mackinac Center is not required to reveal its donors, but available records from foundations show that much of its funding comes from outside of Michigan, including over $2.6 million from the secretive Koch brothers-funded DonorsTrust and Donors Capital Fund, which collectively have been called 'the dark money ATM of the conservative movement.'" http://www.progressmichigan.org/2013/11/mackinac-center-exposed-whos-running-michigan/
David Koch was the Libertarian Party's vice-presidential candidate in the 1980 presidential election, sharing the party ticket with presidential candidate Ed Clark. The Clark–Koch ticket promised to abolish Social Security, the Federal Reserve Board, welfare,minimum-wage laws, corporate taxes, all price supports and subsidies for agriculture and business, and U.S. Federal agenciesincluding the SEC, EPA, ICC, FTC, OSHA, FBI, CIA, and DOE.The ticket received 921,128 votes, 1% of the total nationwide vote, the Libertarian Party national ticket's best showing as of 2009 in terms of percentage.“Compared to what [the Libertarians had] gotten before,” Charles said, “and where we were as a movement or as a political/ideological point of view, that was pretty remarkable, to get 1 percent of the vote.