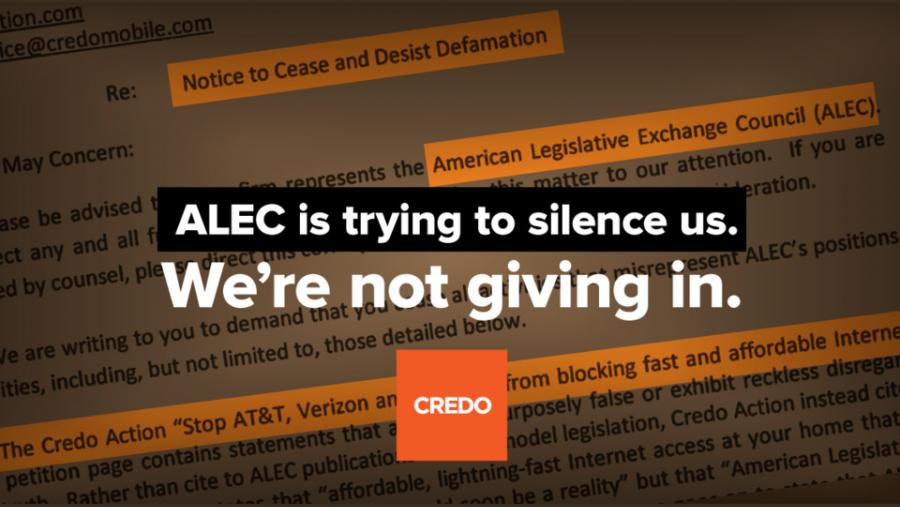 Madison, WI — The Center for Media and Democracy and CREDO Action are denouncing an effort by the American Legislative Exchange Council (ALEC) to silence its critics.

The letter, dated March 5, disputed claims made in a CREDO campaign that is critical of ALEC’s opposition to municipal broadband, which relied in part on research from the Center for Media and Democracy's PR Watch website.

CREDO flatly rejected ALEC’s assertions and refused to comply with its demands in a response dated April 9.

In its letter, ALEC claimed that CREDO’s characterizations of ALEC’s opposition to municipal broadband “contradict ALEC’s publications.” But as CREDO’s response points out, ALEC’s own Telecommunications Deregulation Policy Statement clearly states that “local government provision of wholesale or retail telecom, cable TV, Internet or other broadband services in competition with existing private sector providers should be prohibited” (emphasis added).

CREDO’s full response to ALEC can be found here: http://credoaction.com/credo-response-to-alec

"ALEC has an undeniable record of blocking local authority over a range of issues, from municipal broadband to the minimum wage," said Brendan Fischer, General Counsel of the Center for Media and Democracy/PRWatch.org. "It is incredible that ALEC is not only denying its well-established record of attacks on local control, but also trying to silence those who point it out."

Fischer is available for interviews. Please call 608-260-9713 or email brendan@prwatch.org.

"CREDO’s a different kind of phone company. While telecoms like AT&T and Verizon have participated in ALEC, CREDO gets a cease and desist letter from the right-wing organization," said Becky Bond, Political Director at CREDO Action. She continued, “CREDO has been campaigning for years to convince ALEC’s corporate sponsors to stop funding the organization and we’re seeing a real exodus," adding, “trying to silence a progressive organization like CREDO with legal intimidation just shows how desperate and radically out-of-step ALEC has become."

At least 103 corporations have dropped their ALEC membership since the Center for Media and Democracy launched ALECexposed.org in July of 2011, most recently telecom company T-Mobile.

CREDO has played a key role in the fight to stop ALEC’s extreme conservative agenda. CREDO activists have made tens of thousands of phone calls to companies like AT&T, Duke Energy, Walgreens, State Farm and Johnson & Johnson urging them to end their memberships in ALEC. CREDO is also a funder of groups that fight back against ALEC’s right-wing agenda, most notably ColorOfChange. Major companies like Coca-Cola, eBay and Kraft listened and stopped funding ALEC through membership fees.