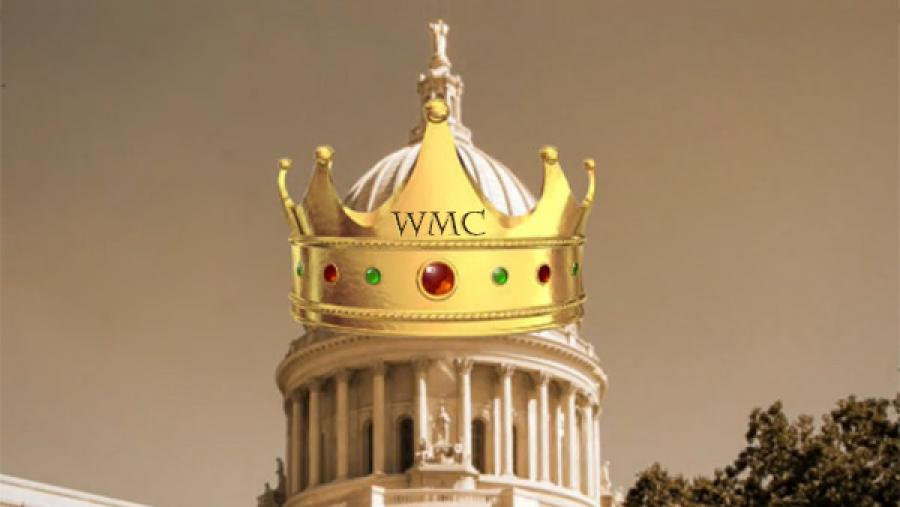 Wisconsin Manufacturers & Commerce (WMC), Wisconsin's premier lobby for corporate tax breaks and low wage jobs, has unleashed a $600,000 ad blitz to strip Wisconsin's independent Chief Justice of her title just as the court prepares to take up the "John Doe" criminal probe of Scott Walker and the special interest groups that defended him against recall in 2012.

WMC's spending in the recall campaigns is one of key issues in the case. The case will be considered in secret without oral arguments by Wisconsin's Supreme Court whose conservative majority was bankrolled by WMC.

You can’t make this stuff up.

The committee was formed to back a constitutional amendment on the April 7 spring ballot that would change the way the Chief Justice of the Wisconsin Supreme Court is chosen. For 126 years under the Wisconsin's Constitution, the title has been given to the longest serving member of the court. Now WMC and the state's GOP leadership, with ties to the right-wing majority of the court, are anxious to change the process to a majority vote.

As CMD previously reported there was little grassroots demand or support for the change to Wisconsin's founding document. Those registering in favor included WMC and former Justice Jon Wilcox whose own campaign was fined $10,000 for exactly the type of illegal campaign coordination that is at issue in the John Doe. His case established the precedent in Wisconsin that campaign coordination with outside groups is illegal.

WMC says the issue is democracy, but the claim is a howler given that the powerful corporate lobby shop has already spent millions to elect the court's right-wing majority and to ensure the GOP's complete control of the legislative and executive branches of government. They are now gunning for the independent Chief Justice as the court prepares to delve into allegations of illegal campaign coordination between Governor Scott Walker and–you guessed it–WMC and other allegedly "independent" campaign groups.

The $600,000 ad blitz will drown the $80,000 radio ad buy from the liberal Greater Wisconsin Committee. Wisconsin voters who will see the "Vote Yes for Democracy" ads will have no knowledge of the corrupt machinations behind the scenes and the unprecedented case that is unwinding behind the closed doors of the state's highest court.

If the constitutional amendment passes on April 7, Wisconsin's respected Chief Justice Shirley Abrahamson will be stripped of her title and her authority on April 8.

Talk about the nick of time. Arguments in the John Doe were scheduled for April 17 and 20.

In the John Doe investigation which has gotten little attention outside the state, a bipartisan group of prosecutors allege that the Walker campaign illegally coordinated fundraising and expenditures with Wisconsin Club for Growth (WiCFG) and WMC during the 2011 and 2012 recall campaigns. While coordination between candidate campaign committees and independent groups is prohibited, WiCFG director R.J. Johnson was also Walker's campaign manager when the state faced a series of nine recall races after the passage of the 2011 union-busting Act 10 legislation. Representatives of the Walker campaign or the dark money groups could face civil or criminal liability if prosecutors find that they conspired to evade campaign finance disclosure requirements and contribution limits. (The U.S. Department of Justice recently settled a criminal campaign coordination case in Virginia.) In his run for the White House, Walker continues to exhibit total disregard for campaign finance law, says the Campaign Legal Center in a complaint filed before the FEC this week.

Although arguments in the John Doe case were scheduled for April 17 and 20, in an effort to make sure no facts of the case that might be harmful to the defendants were leaked, the court took the unprecedented, decision to hear no oral arguments at all, either behind closed doors or in public. The court also denied the Milwaukee Journal Sentinel's efforts to intervene in the case.

"The court's failure to provide further justification for its highly unusual decision to cancel oral argument is, in my view, alarming."

The decision "may, unfortunately, signify the court's intention to dispose of the John Doe cases as a whole in a similarly swift and secretive manner. I cannot join the court in concealing this important litigation from public view."

The John Doe case will now go behind closed doors and will be considered by four justices elected by massive WMC ad buys, as my colleague Brendan Fischer has detailed. WMC has spent at least $7.25 million electing the court's right-wing majority, based on its own estimates.

State prosecutors have asked these justices to recuse themselves, but they have failed to take any action. The Brennan Center for Justice at NYU School of Law submitted an amicus brief on behalf of legal ethicists urging conflicted Wisconsin Supreme Court justices to do the right thing: “The U.S. Constitution requires judges to step aside from cases when there is a serious risk that campaign spending will impact their ability to faithfully apply the law to the facts before them.”

But the issue is still unresolved due in part to the fact that the recusal rules were literally written by WMC and passed by the right-wing majority in 2010.

If the court secretly rules in favor of the Walker campaign, WMC, WiCFG, and the other John Doe defendants, Wisconsin's system of justice will have been upended in a power coup that would make Richard the III proud.

Abrahamson ran as Chief and was elected by the voters in 2009. She is as sharp as a tac, the most published state jurist in the nation, and her awards and accolades are legion. If the amendment were not a partisan attack, it would have been written to allow her to fulfill her whole term as Chief to 2019.

Bill Raftery, who is an analyst at the National Center for State Courts, an independent clearinghouse for research on state courts says the situation is unprecedented. “It’s atypical where the selection of the chief justice stands alone on the ballot,” he said. “I can’t remember a time where it has occurred.”

The extraordinary expenditure a week before a vote that is likely to go their way, signals how desperate the corporate lobby is to get rid of any impediment to their agenda. The Wisconsin GOP is also proposing to "reform" the nonpartisan elections board which sparked the investigation and is busily rewriting the John Doe statutes so that no politician will ever be subject to another.

Comically, WMC TV ad equates the seniority of an official elected by the voters four times with monarchy.

"In a monarchy, power is inherited," intones the narrator. "But in a democracy we get to decide. You might be surprised to learn that on the Wisconsin Supreme Court, power is inherited. The job of chief justice goes to the judge that's been there the longest. That's not democratic, and it's not the American way."

But consolidating power to establish complete control over three branches of government and offing your opponents is the true sign of a monarchy run amok.

While Gov. Walker and his allies at WMC wish they could banish the Chief Justice to the Tower, Wisconsin voters may yet surprise.

I beg to differ on only one point. You should have used the word oligarchy as opposed to monarchy. The folks with the money in Wisconsin are making it impossible for the little people to influence events. I am worried for you Wisconsin.
"The case will be be considered in secret without oral arguments by Wisconsin's Supreme Court whose conservative majority was elected (sic) by WMC. You can’t make this stuff up (sic)." Well, I can't, but I guess the author of this report can......
<p>Bankroll is a better term.&nbsp;</p>
The dirty work going on in Wisconsin now smacks of the same tactics Hitler used to rise to power prior to WWII. Is this so hard for the electorate in Wisconsin to see and realize these people want carte blanc to eliminate the middle class and have this country run by oligarchs like the Koch Brothers and their puppets like Scott Walker? I hope anyone who has reasoning power will see that all this is a push to bend us all to their warped vision for a country that was built by middle class citizens. Please have the sense to look evil in the face and see what is planned for you and your family.
After reading the AJR1, which is a resolution mind you, I've discovered the following: 1. The chief justice seat would be vacated every two years (it's a term limit - they are used to avoid long-term corruption and lifetime appointments). 2. The new chief justice would be elected by majority vote from EXISTING court justices. Makes sense - would a company want the general public to vote for their board members, or employees who have worked very closely with the company and the people being considered? 3. Judges of any type are supposed to be beholden to the law, NOT POLITICAL AGENDAS. Why do we need to politicize the court systems as well as everything else? Democrats and Republicans alike have folks in their ranks who want term limits for certain official offices. If a Democrat campaigned for the same resolution, would it still be a big problem?