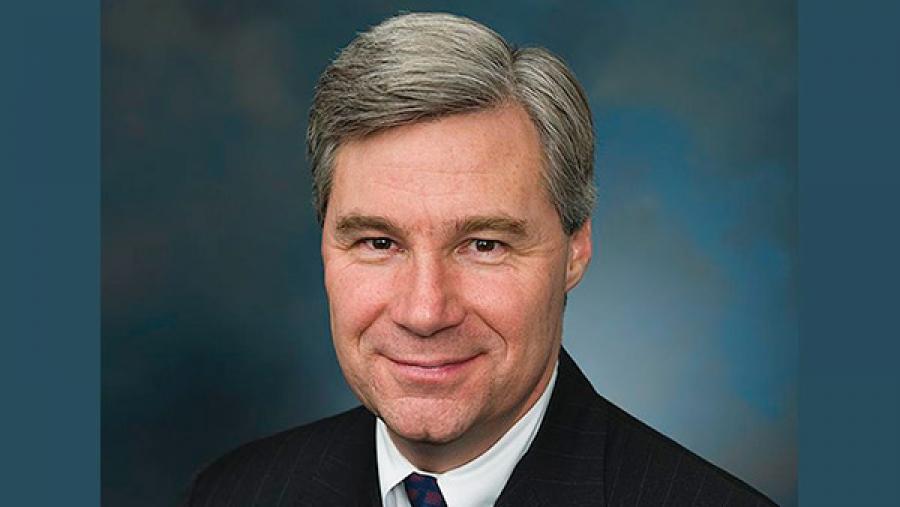 This week, US Senator Sheldon Whitehouse (D-RI), took to the Senate floor to call upon America to “wake up” to the damaging effects of climate change denial and the fossil fuel industry funding received by groups that promote it, including the American Legislative Exchange Council (ALEC), the corporate bill mill that has been pushing a destructive agenda of climate change denial.

"ALEC is an organization, which works to undercut climate science and undermine climate progress at the state level, interfering in our state legislatures. ALEC has tried to roll back state renewable fuel standards and has handed out model state legislation to obstruct and tie up the President's Clean Power Plan," Whitehouse boldly stated on the Senate floor.

"Major companies like Google, eBay, Facebook, Yahoo and believe or not even Occidental Petroleum, have disassociated themselves from ALEC because of its destructive position on climate. Google CEO Eric Schmidt has said of ALEC, quote 'they are literally lying' end quote. They are literally lying about climate change but they keep getting funding from Chevron, BP, Shell and ExxonMobil," he continued.

Sponsorship opportunities at ALEC conferences, held three times annually, are offered at several different levels. Its “President” level during its annual meeting comes with a $100,000 price tag, which Chevron, BP and Shell have all paid for in the past and its “Chairman” level at $50,000, which ExxonMobil has forked over.

The conferences, which bring together state legislators and corporate lobbyists, include “policy workshops,” that are also paid for by corporations at $40,000 for a session during ALEC’s annual meeting.

At one of its sessions in August 2014, legislators were taught "there is no scientific consensus on the human role in climate change," during a presentation led by Joseph Bast of the Heartland Institute.

At a workshop held during the same meeting, presenters from the Committee for a Constructive Tomorrow (CFACT), misleadingly touted the benefits of increased atmospheric CO2. And at its annual meeting in 2011, ALEC held a session titled "Warming Up to Climate Change: The Many Benefits of Increased Atmospheric CO2."

The teaching of climate change denial is also promoted through ALEC “model legislation,” which is voted on during secretive “task force” meetings at ALEC conferences with lobbyists voting alongside legislators. ALEC has passed and pushed the Environmental Literacy Improvement Act, an anti-science bill that has been described as an effort to introduce climate denial into the classroom.

Most recently, ALEC has been pushing state legislation geared toward blocking the federal Clean Power Plan, proposed legislation aimed at reducing carbon pollution from power plants across the country. Already in 2015, these ALEC bills have been stacking up in more than a dozen state legislatures. Both West Virginia and Virginia have already passed similar legislation, and related bills are moving swiftly through committees and chambers in several other states.

The language of the ALEC bill was adopted during the ALEC Energy, Environment and Agriculture task force meeting held in December 2015 in Washington, DC. Under the federal proposal, states are required to submit a plan on how they would reduce carbon pollution to the EPA. The ALEC legislation would require these plans to clear additional obstacles, including requiring ALEC-dominated state legislatures to sign off on any plan.

ALEC has another proposal, in the form of a non-binding resolution, that urges the U.S. Congress to oppose the implementation of the Clean Power Plan. Resolutions reflecting the ALEC language have passed through committees in Arizona and Florida and been approved by the Missouri State House of Representatives.

Climate Deniers at the Forefront

Among the three sponsors of the resolution in Arizona, S.C.M. 1014, is climate change denier with ALEC ties state Senator Sylvia Allen. “I’m holding this book right now that has listed 32,000 scientists, who over the years have been trying to say that man is not causing global warming,” Allen said at a rally. “It’s only because of the money that these crooks can make is why they’re saying to you the debate is over.” Allen has also claimed that the Earth is just 6,000 years old.

In Colorado, ALEC member state Senator Jerry Sonnenberg sponsored S.B. 92 requiring legislative approval of any state plan. “I think everybody can agree that climate change is happening…Look outside right now,” Sonnenberg said during the second reading of a bill as snow outside was falling. “I can stand some global warming quite frankly.”

Sonnenberg’s bill was postponed indefinitely in committee, and bills attacking the Clean Power Plan have failed or been withdrawn in other states, including Mississippi, Montana and South Dakota.

But as the Center for Media and Democracy and the Guardian reported previously, ALEC is also promoting a litigation strategy encouraging state attorneys general to file suit against the EPA.

With ALEC having increased dominance of state legislatures following the republican wave in 2014, and with the clock ticking on the global challenge of taking meaningful action to prevent irreversible climate change, Senator Whitehouse’s “wake up” call is timely and urgent.

I know it's tempting to debate the deniers. I used to do it all the time. But consider: One second spent debating with deniers is one second lost forever, and this is just what they want: disputation, distraction, and endless delay. Denial (aka delay) equals huge profits to ff corporations. But, in that one second the earth's oceans and atmosphere gain an extra ‘4 Hiroshima atom bombs’ of energy, due to increased greenhouse gases. http://www.skepticalscience.com/4-Hiroshima-bombs-worth-of-heat-per-second.html Instead of engaging with deniers, urge your Congressman to support solutions with letters and phone calls. If she is deaf to reason, give her the sack! There ARE powerful solutions waiting for Congress to act. One is the “carbon fee and dividend,” which would, starting at $10/ton carbon, reduce emissions by 50% in 20 years, and might give us a fighting chance for a livable planet. With the dividend, citizens RECEIVE the fees, and the polluters pay them. So, jobs and GDP grow as well. Those concerned about AGW can also check out Citizens Climate Lobby (CCL) at citizensclimatelobby.org Our goal is to create the political will for a livable planet. The methods and pathways to that goal are explained. CCL is growing rapidly and is one of the best grass roots organizations defending what is left of a stable climate. We need all hands on deck for this crisis. As voters we are in the driver's seat, but we must grip the wheel.