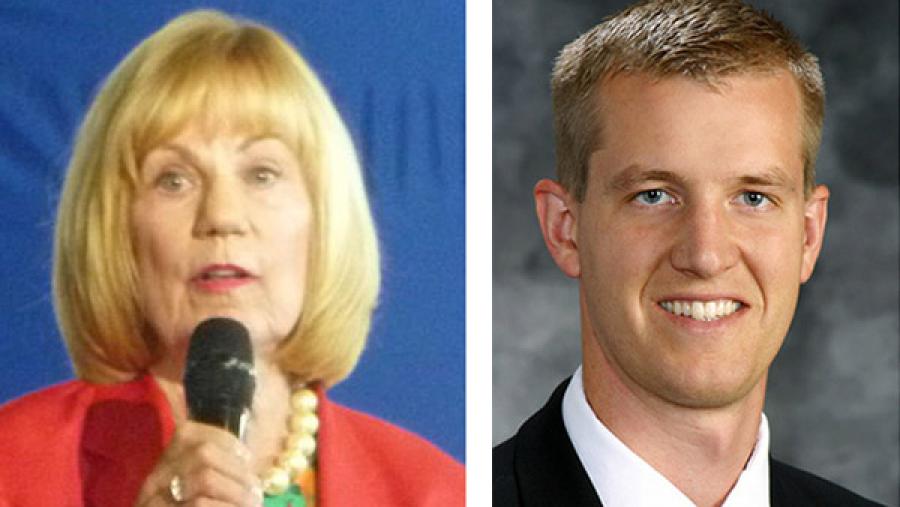 Two suburban Wisconsin lawmakers have unveiled an economic development plan for the lowest-income neighborhoods of Milwaukee, and their "solutions" for the Wisconsin communities hit hardest by deindustrialization come directly from a national right-wing playbook.

Rep. Dale Kooyenga (R-Brookfield) and Sen. Alberta Darling (R-River Hills) represent two of the wealthiest districts in Wisconsin and have no background in economic development, yet have proposed at 23-page plan targeting the majority-minority communities with the highest unemployment rates in the state -- and have done so without consulting any of the elected officials who actually represent the area.

"I don't understand how two suburban legislators can tell Milwaukee what they need without talking to Milwaukee legislators," said Sen. Nikiya Harris Dodd, a Democrat who represents Milwaukee. "It's really hurtful."

The proposals come against the backdrop of four years of failed economic policies. The harsh prescription of tax breaks for the rich and cuts in services for the poor that Governor Walker promised would revitalize Wisconsin's economy and balance the budget have failed to do either. Wisconsin remains 32nd in the nation in new job growth and the state faces a $2.2 billion dollar deficit. In January 2014, Rep. Kooyenga promised the Wisconsin State Journal that Wisconsin's structural deficit would be gone by 2015.

These policies have contributed to record inequality in the state, according to the Wisconsin Budget Project. As members of the Joint Finance Committee, Sen. Darling and Rep. Kooyenga have been key architects of this agenda.

"It's Breathtaking to Hear the Double Talk from Sen. Darling"

The "New Opportunities for Milwaukee" plan isn't the first time that Sen. Darling has felt comfortable deciding what's best for the state's largest and most diverse city, without regard for what its residents think.

In 2011, after Scott Walker became governor and Republicans took control of the legislature, Darling was one of the principal sponsors of a bill to ban local governments from guaranteeing workers paid sick days in the name of "uniformity." The law was aimed squarely at Milwaukee, where voters had overwhelmingly passed a ballot measure allowing workers to earn paid sick days to take care of themselves or a family member who is ill. (The law was then shared at an ALEC meeting and similar bills subsequently spread across the country.)

"It's breathtaking to hear the double talk from Sen. Darling," said Ellen Bravo, Executive Director of Family Values @ Work, a coalition of groups advocating paid sick days and other family-friendly policies. "A local policy of paid sick days in Milwaukee, democratically enacted by 70% of the voters, was not OK because the state allegedly needs a uniform standard. Yet a local policy of so-called right-to-work in Milwaukee, undemocratically imposed by the state, is just fine," Bravo said.

The proposal for targeted right to work legislation that applies only in Milwaukee is part of a new national push that is spearheaded by groups like the Heritage Foundation and a new ALEC offshoot, the American City County Exchange (ACCE).

So-called "right to work" laws allow non-union members to free-ride on union representation, reaping the benefits of negotiated wages and benefits but without paying the costs. According to a new report by the Economic Policy Institute, statewide right to work laws are associated with lower wages for both union and non-union workers and undermine the middle class.

Republican lawmakers in Wisconsin have long supported a statewide anti-union right to work law, and GOP leadership is debating whether to take up the measure this year. But the push for local right to work is part of a controversial multi-state effort that began just months ago.

In September of last year, the Washington Examiner reported that "Conservatives are starting to push the idea that city and county governments can pass union-restricting right-to-work laws, even though it may not be legal and has been tried only a handful of times in the last 70 years."

Nonetheless, in August of last year the Heritage Foundation issued a report making the case for local right to work laws, and hosted a panel discussion on the issue featuring representatives of ACCE, Grover Norquist's Americans for Tax Reform, and the National Right to Work Legal Foundation.

Then, in December, the ACCE meeting in Washington, D.C. featured a workshop on local right to work, according to the New York Times, which reported that supporters of the effort would first try to pass the legislation in Kentucky, and then try their luck in Republican-controlled states that don't have a statewide right to work law--specifically naming Wisconsin as a target.

Indeed, that is precisely what has happened. Several Kentucky counties enacted local right to work laws throughout December and January. And with the Darling/Kooyenga proposal, Wisconsin could be next.

If such a provision is enacted for Milwaukee, it will almost certainly result in costly federal lawsuits challenging the laws as illegal under the National Labor Relations Act. Hardin County, Kentucky has already been sued over its law. (A nonprofit group called "Protect My Check" is offering to pay for the Kentucky counties' legal defense, but it is unclear whether a similar arrangement has been organized in Wisconsin.)

Jennifer Epps-Addison, Executive Director of Wisconsin Jobs Now, said that "not a single Milwaukee resident that I've heard from [in the areas targeted by the proposal] has asked for a right to work law. In fact, the only jobs in those zones that pay family-supporting wages are unionized," she said.

"If [Darling and Kooyenga] really wanted to address poverty, they would make it easier to unionize in places like McDonalds and Walmart, in the jobs that are already present in those areas," Epps-Addison said. Or, she said, they could support a $15/hour minimum wage, "which is the loudest call that I've heard from people here in Wisconsin and nationally."

Wisconsin Jobs Now has a petition asking Darling and Kooyenga to visit Milwaukee neighborhoods and actually talk to residents and get their opinions on how to reduce poverty, rather than imposing a national right-wing agenda on them.

"To impose these policies without consulting people in Milwaukee is disrespectful and disingenuous," Epps-Addison said.

Other Policies Lifted from Right-Wing Playbook

Another item in their proposal would accelerate the spread of charter schools in the targeted area, using proposals that track the ALEC education agenda. It calls for a "turnaround school model" that would convert public schools deemed "failing" into charters, which are often operated by for-profit providers. It would allow high-performing charter schools to create new charters without getting approval from charter school authorizers, injecting even less accountability into an already unaccountable system.

The legislators propose eliminating what they call "barriers to work" in the form of occupational licensing requirements--a solution drawn directly from the Koch-founded and -funded Institute for Justice. ALEC has adopted bills calling for an end to occupational licensing, and has also long pushed the notion that urban zones should serve as corporate tax havens. The ALEC Enterprise Zone Act establishes “zones in depressed areas that have reduced taxes” and no “government barriers to … profit.” That bill came out of the ALEC Commerce, Insurance and Economic Development Task Force, of which Darling is a member.

Notably, Sen. Darling is one of the state's most vocal proponents of ALEC-inspired voter ID laws, and both she and Kooyenga sponsored the state's 2011 law requiring an ID to vote. But strikingly, only half of eligible voters in the zip codes targeted by Darling and Kooyenga have valid driver's licenses. (In one of the zip codes, the number is closer to twenty percent). This means the pair have been actively working to disenfranchise the same people they now claim to be trying to help, advocates say.

Ironically, the Darling/Kooyenga proposal says the fact that Milwaukee doesn't have an automobile or train manufacturing industry justifies their plan for a zero percent corporate tax. It specifically notes that good manufacturing employers like "A.O. Smith, later sold to Tower Automotive" are no longer providing family-supporting jobs in the area.

But in fact, until recently Milwaukee did have a burgeoning train manufacturing plant, in the old Tower Automotive facility--but it was killed by Governor Walker and legislative Republicans, including Sen. Darling and Rep. Kooyenga. Dave Cieslewicz tells the tale:

In 2009, then Gov. Jim Doyle joined forces with Milwaukee Mayor Tom Barrett to convince train manufacturer Talgo to locate in Milwaukee. The city of Milwaukee invested $10 million for site improvements at the old Tower Automotive plant in a neighborhood that needed the jobs and the reinvestment. Wisconsin ordered two trains for the state-sponsored Milwaukee to Chicago Hiawatha service. In addition, Talgo had an order for two trains for use in Oregon and Washington that would also be built in Milwaukee.

Then Doyle famously secured $810 million in federal stimulus money to build higher-speed rail from Chicago to Milwaukee to Madison with the promise of eventually connecting the line to the Twin Cities. And, of course, those train sets would have been built in Milwaukee too.

But in 2010, Scott Walker was elected governor and rejected the high-speed rail funds. Republicans in the legislature--Darling and Kooyenga included--cancelled the contract with Talgo, despite having already paid the company $52 million for the trains. The state could be on the hook for another $70 million in damages if Talgo's lawsuit against the state is successful.

Meanwhile, the Talgo factory is vacant. And the rail system that would have carried Milwaukee residents to jobs in the suburbs doesn't exist.

Maybe electing someone without a college education as governor was not so smart after all! Being able to read and think for oneself without a scripted agenda from ALEC might be requirements for the next governor.
This is what you get when you don't pay attention. The voters have spoken......well the ones with money have because they want more.......Democrats are just plain horrible at getting people to vote in the mid term elections.....and then wonder WHY these things happen. What effects your life more.....a Presidential election? Or Local elections like Governor, state senate, state legislatures, Judges,mayors, city council members etc...... pay attention to where YOU live....nobody else really cares. Otherwise you get what you don't vote for............and end up suffering.....its our civic duty to VOTE....SO VOTE