The Kochs Will Spend $1 Billion on the 2016 Elections, but Deny It | PR Watch

The Kochs Will Spend $1 Billion on the 2016 Elections, but Deny It 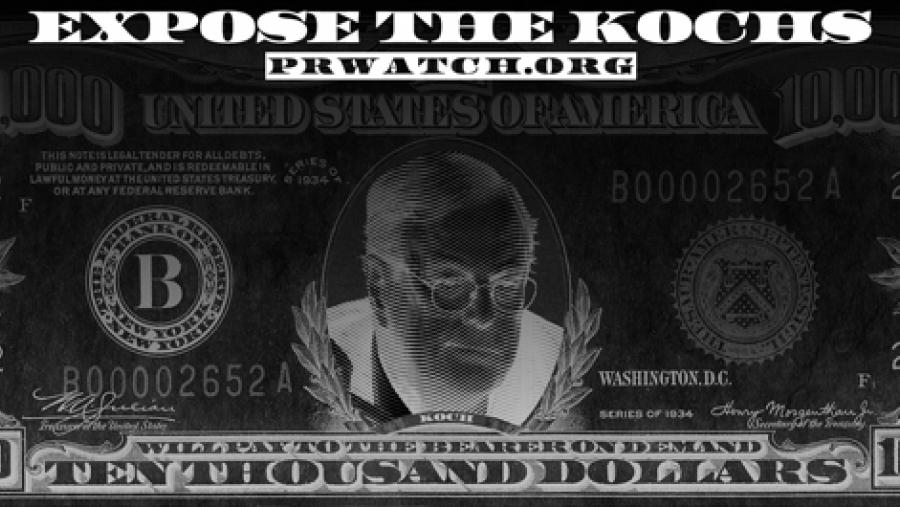 The political network organized by Charles and David Koch plans to spend an incredible $889 million to capture the White House in 2016 and deepen the Koch party's bench in Congress. But that's not what they'll tell federal regulators.

If history is a guide, the Koch network will claim that much of the nearly $1 billion it will funnel through an array of nonprofit groups is not about elections at all. Instead, the Koch groups will claim that their efforts to elect politicians who will lower capital gains taxes and overturn environmental regulations is really all about "social welfare."

That's what happened during the last presidential cycle.

The Kochs' main political advocacy arm, Americans for Prosperity, spent $122 million in 2012--more than it had spent in its previous eight years of existence combined--but told the IRS that the vast majority of its spending had nothing to do with elections. AFP reported spending less than a quarter of its overall expenditures on electoral intervention, around $33.5 million, about the same amount that it reported in spending to the Federal Elections Commission.

Another group in the Koch network, the 60 Plus Association, spent around $18 million in the 2012 election year, but told the IRS that only $35,000 of that total had anything to do with electoral politics. Similarly, American Commitment spent $11.5 million in 2012, but told the IRS it spent only $1.86 million on elections. Wisconsin Club for Growth told the IRS that it spent $0 on elections in 2011 and 2012, despite spending $9.1 million on Wisconsin's recall elections and working closely with Scott Walker's campaign; the Center for Media and Democracy filed a complaint against the group last year.

Most of the groups in the ever-expanding Koch universe are nonprofits organized under Section 501(c)(4) of the tax code, whose primary activity is supposed to be "social welfare" rather than electoral politics. In turn, these nonprofits are allowed to keep their donors secret.

The Koch nonprofits assert that any ads or activities that don't expressly tell viewers how to vote should count as "social welfare" rather than electoral intervention, a claim that in many cases would appear to be contradicted by IRS guidance and court decisions.

But a recent Center for Public Integrity analysis found that the IRS, hobbled by budget cuts and under intense political pressure, almost never audits nonprofits engaged in excessive political activity.

Politically active nonprofits are simply “not afraid of the IRS or anybody else on this matter,” Paul Streckfus, a former exempt organizations division employee, told CPI. “Anything goes as far as spending.”

The IRS proposed new rules for nonprofit political activity in late 2013, but pulled the guidelines amidst criticism that the proposal was both over- and under-inclusive. Groups like the Bright Lines Project have been urging the IRS to go back to the drawing board, but it is very unlikely that any new guidelines will be in place before the 2016 elections.

Which means that the Kochs will have free reign in 2016 not only to pour astonishing amounts of money into U.S. elections, but--in contrast with traditional parties--to do so in secret, without disclosing the financial interests behind the spending.

The $1 billion the Koch network plans to spend in 2016 should dispel any doubts that the Kochs are operating their own secretly-funded shadow political party.

The level of resources that the Kochs and their donor-allies can muster can determine political futures. (Just ask Joni Ernst.) The "Koch primary" is now a vital part of the GOP presidential race, where Oval Office hopefuls like Scott Walker, Chris Christie, and Marco Rubio drop everything to attend Koch confabs. For Republican presidential contenders, appealing to the handful of wealthy donors in the Koch network is at least as important as building support among voters in Iowa and New Hampshire.

And as the Kochs continue to ramp up their political spending, it will only further solidify the network's role as a dominant (and shadowy) force in U.S. elections.

That's right, a lie: You can't honestly call every cent spent by any organization the Kochs give even a pittance to, "the Kochs" spending. Like most of that money wasn't donated by other people, because they, too, supported what it would be spent on.
Let's see, we have a donkey for the Democrats and an elephant for the GOP. The Koch Party mascot must be tapeworms or bot flies or maggots or liverfllukes or.....you get the picture.