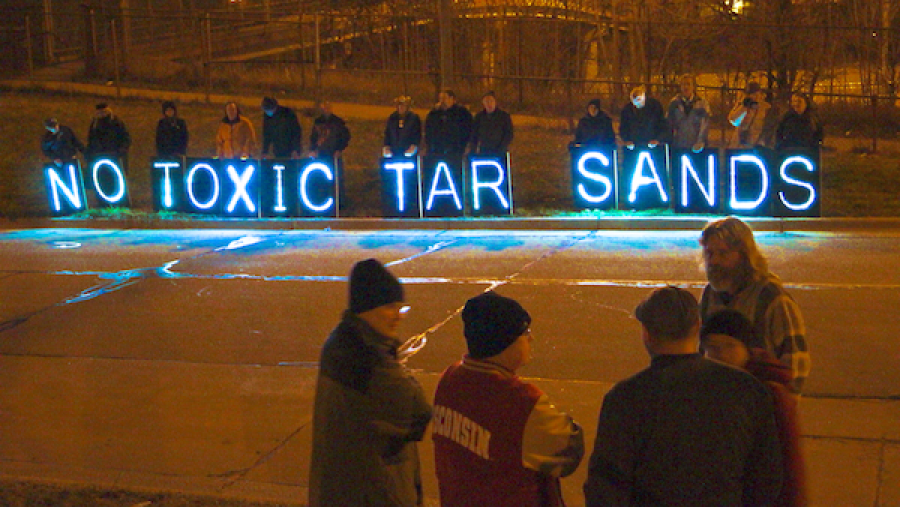 Madison -- Whether or not the Keystone XL pipeline will transport tar sands oil from Canada through the United States has been framed as one of the critical decisions affecting our climate and our future as a planet. But a proposed expansion of the Enbridge Line 61 pipeline being debated in Dane County, Wisconsin may be even more critical.

The tripling in capacity of Line 61, which already carries Tar Sands crude oil from Alberta to Illinois, will make it a third larger than the projected Keystone XL.

"On the Front Lines of Our Fight against Climate Change"

"The last real line of defense against this expansion is an obscure zoning committee in Dane County, Wisconsin, which is scheduled to meet on January 27 to decide whether to attach conditions to Enbridge's permit for a new pump station," wrote Dan Kaufman recently in the New York Times.

But Peter Anderson of 350 Madison told CMD, "This is not an arcane regulatory proceeding in some back room. This is on the front lines of our fight against climate change and to achieve climate action."

Enbridge Line 61 went into operation in 2009. When the company proposed the expansion, the Walker administration's Department of Natural Resources (DNR) issued the company an air quality permit for a storage tank needed for the expansion in 2014, but did not require a new environmental assessment for the tripling in capacity.

Now the Dane County Board's Zoning and Land Regulation Committee is considering attaching conditions to the permit for the new pump station -- which will be needed to pump the thicker Tar Sands oil through the line, even when diluted with the chemical solvents added to make it move more easily -- to provide Wisconsinites with a greater measure of environmental protection.

Kaufman told CMD that Enbridge Line 61 hasn't received the national attention that the Keystone XL Pipeline has because "the pipeline itself already has been built and it is carrying roughly 400,000 barrels of Tar Sands-derived and lighter conventional crude oil already. The environmental assessment that was done in 2006 was prior to one of the largest spills -- probably the largest inland oil spill -- in American history, which was a spill by this company, Enbridge, who also owns Line 61."

Kaufman was referring to Enbridge's disastrous Kalamazoo River oil spill in Michican in July 2010, which took an estimated $1.21 billion and four years to partially clean up. A Sierra Club report detailed that since 1999, Enbridge has had 800 spills, including spills in Wisconsin and neighboring states. Enbridge was fined a record $2.4 million in connection to an explosion that killed two workers in Clearbrook, Minnesota.

After the Kalamazoo spill, Enbridge was strongly criticized by the National Transportation Safety Board for lapses, including ignoring alarms in their system and trying to restart the pipeline twice, which discharged more oil.

Enbridge claims to have invested several billion dollars more in improving its response since the Kalamazoo River disaster, but as Kaufman noted, there have been spills since.

That's how the Dane County Board's Zoning and Land Regulation Committee ended up being what Kaufman called the "last real line of defense against this expansion."

Supervisor Patrick Miles is the chair of that committee. He recently told Madison's community radio station WORT, "Tripling that capacity to me is... tripling the risk." Compared to the Kalamazoo River spill, in which 800,000 gallons of Tar Sands crude spilled over the course of 17 hours, Miles said that "at the volume of what we're talking about here, in an hour's time, if there's a spill at the proposed flow rate, we'd be talking about more than 2,000,000 gallons of the Tar Sands [oil] spilling. That's a lot of oil."

Kaufman pointed out that Enbridge's track record of spills, as well as the fact that much of the increased capacity of the line will consist of Tar Sands oil, could potentially increase that risk.

Because of the nature of Tar Sands oil, when it spills into bodies of water, the chemical solvents separate and are released as toxic gases, whereas the crude oil itself sinks because it's heavier than water. Other oil floats, which is essential for existing clean-up techniques. "Nobody really knows how to clean up Tar Sands spills," Kaufman pointed out.

Given the risks, Chairman Miles says the committee is considering imposing two conditions on Enbridge in giving it the conditional land use permits it needs to continue with the expansion. The first would be a requirement for Enbridge to have added pollution liability insurance in case there is a spill that Enbridge can't afford to clean up, so that Dane County isn't left footing the bill. The other would be a requirement for a new environmental impact statement, given the added capacity and the risks of a rupture or spill.

The latter is a condition that Kaufman says should be mandated, especially given the larger picture issue of climate change: "People need to look at these pipelines in terms of their cumulative effect on climate change. You can always argue that one pipeline is not going to make that much of a difference here or there, but unless an assessment is done looking at the whole picture, you're missing out on the biggest problem, which is its effect on climate change," he said. NASA scientist James Hansen is one of the most prominent scientists who have warned that if the Canadian Tar Sands are burned, it "will be game over for the climate."

Enbridge has threatened a lawsuit against the county if the committee does not approve the permit as is. It has called the additional insurance being proposed "cost prohibitive" and says its current $700 million insurance policy is sufficient. The Kalamazoo River clean up has cost Enbridge $1.21 billion as of November 2014.

"Does the Public Have the Right to Be Protected" from Corporate Power?

"Asking our communities to risk suffering the consequences of near-inevitable spills that could easily equal or exceed the Kalamazoo River disaster, so that Tar Sands companies can send their dangerous, polluting product to the Gulf Coast, the East Coast, and overseas, is an all-risk, no-reward proposition," suggests Sierra Club in a recent report. This especially does not make sense in the context of declining demand for oil.

If conditions are applied by Dane County, Enbridge may sue or may also seek to override local zoning control via state legislation, just as the state's frack sand mining industry has done. This raises the question, "Does the public have the right to be protected, or is corporate power going to run roughshod over the public?" asks Anderson.

The Dane County Board's Zoning and Land Regulation committee meets on Tuesday, January 27th, at 7pm at Madison's City-County Building, Room 354. 350 Madison expects Line 61 to come up on the agenda around 8pm.