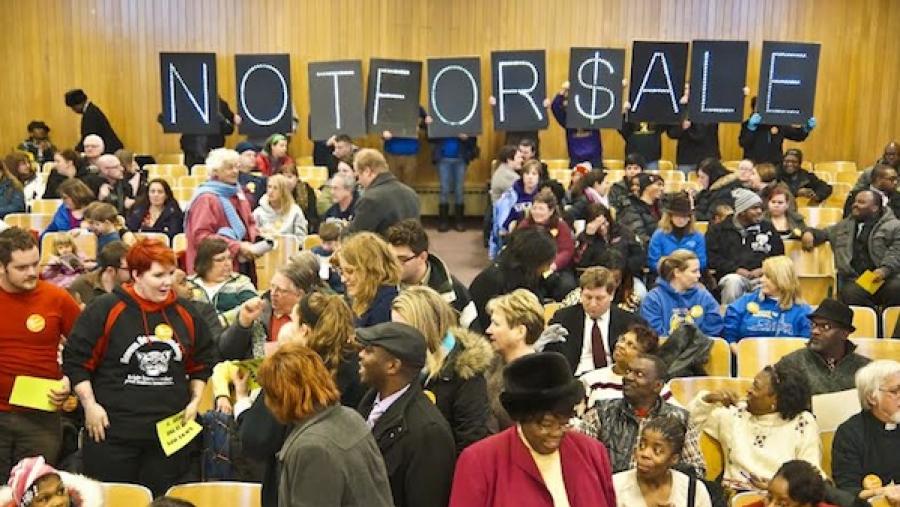 Wisconsin's decades-long effort to turn public schools into for-profit cash cows for private corporations is ramping up with a bill that GOP leaders want to pass by the end of January.

Multiple studies have shown that student test scores are a better measure of a community's wealth then they are of school performance or teacher quality. And the evidence doesn't show that turning public schools into charters improves test scores or produces better-educated children. CMD spoke with Julie Mead, Professor of Educational Leadership & Policy Analysis at UW-Madison, who stressed this point:

"While we all want to find ways to help struggling schools or more accurately the students enrolled in them to do better, there is absolutely no credible research evidence to suggest that charter school conversions will produce the result. Assembly Bill 1 (like A.B. 549 a year ago) is out of plumb with the goal of educational improvement. It's as if you went to the doctor complaining of a broken arm, and the doctor said 'OK, let's get a cast on your foot.'"

Last year, Sen. Luther Olsen (R-14) introduced a "school accountability bill" with similar provisions to convert "failing" public schools. It ultimately failed to pass, but had it done so, it would have opened the floodgates for for-profit charter operators, according to political economist Gordon Lafer. In a 2014 report report for the Economic Policy Institute, Lafer concluded that the bill "would likely result in shutting a growing number of public schools and concentrating the city’s neediest students in a shrinking public system that is denied the resources to serve them. Eventually, this would bankrupt the public school district."

Now the Wisconsin GOP is fast tracking a new "accountability" proposal that threatens public school districts across the state.

Because it is being fast tracked, the bill seems to be still under construction. An early draft of the bill included a shocking provision that would have fired teachers who do not perform well enough according to arbitrary benchmarks, and replaced them with unlicensed ones. These provisions were cut after Sen. Paul Farrow (R-Pewaukee) objected, the Wisconsin State Journal reports.

Then, at the 12-hour January 14 hearing, Thiesfeldt told the educators and others who took time off of work to testify that the bill would be re-written to "focus on local control." The biggest change would be eliminating provisions to create a controversial Academic Review Board -- stacked with charter school advocates -- that would have been charged with overseeing schools and imposing sanctions on those deemed to be failing, including converting public schools to charter schools.

Thiesfeldt attempted to strike a conciliatory tone at the hearing, stressing that his planned changes to the bill represent a negotiation of all sides.Yet, the underlying process shifting public schools to charters remained intact. The bill still counts as one of the most sweeping anti-public education bills since former governor and longtime ALEC member Tommy Thompson signed the voucher act into law in 1990.

And the last-minute announcement that a new bill was in the works seemed designed to undermine testimony from the teachers who had already arrived at the hearing prepared to discuss the bill as written.

Democratic Rep. Sondy Pope observed that she's never been involved in a "hearing on a bill that doesn't exist."

When she asked if there would be a public hearing on the new bill, Thiesfeldt didn't mince words: "No, I'm not going to commit to that."

Why such a messy process? The Senate sponsor of the companion bill, Senator Paul Farrow admitted that "artificial speed" has been demanded from leadership after Gov. Scott Walker promised to make it the new session's top priority.

But the warring goes on over key provisions in the bill, such as the modest effort to hold failing charters to account by not sending more voucher students their way. On Thursday, Walker told the press that failing private schools should be forced to change by parents, and not by the accountability provisions in the bill.

Thiesfeldt has served as an alternate member of ALEC's Education Task Force, and has fought tooth-and-nail to keep his communication with the corporate bill mill hidden from the open records spotlight, as CMD and Common Cause revealed in 2012. It comes as no surprise that the assembly bill is closely aligned with the ALEC charter school agenda; it echoes both the A-Plus Literacy Act, which provides for letter grades for schools, and the omnibus Indiana Education Reform Package. The latter contains a provision to convert a public school to a charter if it "has been placed in either of the two lowest categories or designations … for two consecutive years."

For-profit school lobbyists are some of the biggest spenders in Wisconsin campaigns. According to the Wisconsin Democracy Campaign, the groups funneled $10 million into state elections between 2003 and 2012. "Pro-voucher special interests were among the biggest spenders on their behalf, and Assembly Bill 1 stacks the deck in their favor as payback," said Scot Ross of the advocacy group One Wisconsin Now.

Betsy DeVos, who chairs the American Federation for Children, contributed $500 (the largest amount allowed under Wisconsin campaign finance laws) directly to Thiesfeldt's 2014 re-election campaign, as did her husband, Amway heir Dick DeVos as part of, we might assume, his strategy to "dismantle" public education and "undercut" teachers' unions by bankrolling pro-voucher candidates, as he outlined it in a 2002 speech at the Heritage Foundation.

Amy Mizialko, a 23-year special ed teacher in Milwaukee Public Schools, got to the heart of the issue when she testified at this week's hearing: "This legislature can’t punish and starve our students of the resources they need to learn and then declare that our students are failures."

The public outcry over this bare-knuckled attempt to cash in on kids is likely to continue; the Assembly Committee on Education adjourned at 9:30 pm as public school teachers and supporters of public education still waited in line to testify.

No surprise the public is clueless - Wisconsin was the test case for the legality of intentional bias in broadcasting and the FCC ruled there is no need to provide balance to the listening community for FCC licensees: http://www.suewilsonreports.com/2014/05/may-19-2014-originally-published-at.html
This is an excellent story, but one clarification. The 12-hour hearing included parents, school board members, grandparents, teachers, advocates, administrators, businesspeople, etc. To characterize the opposition to this silliness as just teachers does "the movement" a disservice.