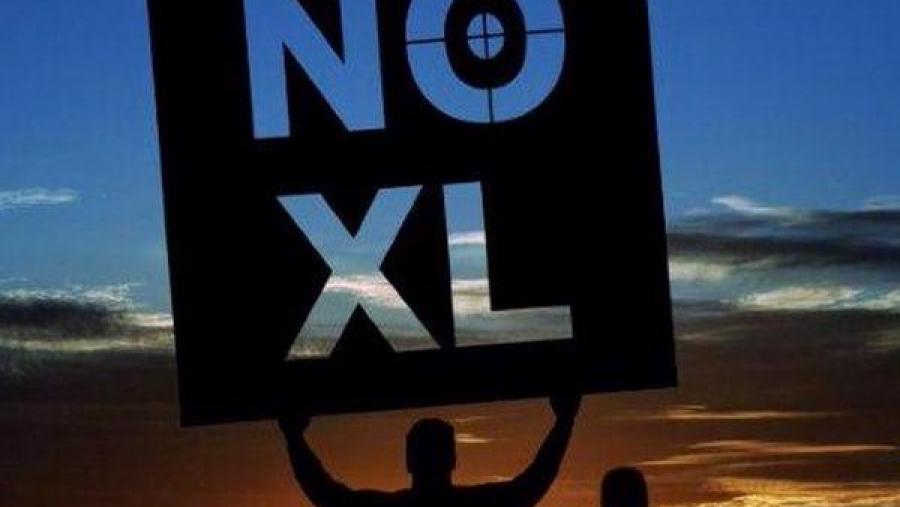 There's no more room for speculation. If the GOP-controlled Congress passes a bill directing approval for the Keystone XL pipeline, President Obama will veto it. Such was the announcement yesterday by White House Press Secretary Josh Earnest. There were no qualifiers, no weasel words, nothing that would indicate the president is looking for a backdoor that will allow him to approve the project and save face.

"There’s an important principle at stake here,” Earnest said, referring to the State Department review procedure that never faced a congressional challenge before this pipeline and this president. “There’s a well established process that should not be undermined.”

Will that threat be enough to drive the Republicans back into their chambers to plan some other show of strength, a public display of their new-won power in DC? Not likely. The White House issued a similar veto threat in November, after the midterm election, when the GOP in full chuff (with an assist from Democrats trying to save Mary Landrieu's senate seat) forced a vote on Keystone that ultimately failed in the Senate.

As we discussed regarding that kabuki-theater vote, Congress can do very little without the President's acquiescence. It takes a presidential signature to make a bill become law, or a two-thirds vote in both houses of Congress to override a veto. That seems an insurmountable obstacle at this stage. The GOP has majorities in both houses, but nowhere near two thirds. And while some Democrats support building Keystone XL, it's highly unlikely there are enough to reach the super-majority, assuming they would all be willing to defy their party's standard bearer. But that doesn't mean a little horsetrading couldn't shake things up and make the bill a bit more appealing.

New York Democratic Sen. Charles Schumer went on CBS News's "Face the Nation" Sunday to talk about the Democrats' plan to improve the bill and put the GOP's feet to the fire. Among those plans are requirements that the steel used to build the pipeline come from U.S. manufacturers rather than foreign suppliers, and that the oil transported through it be prohibited from export to foreign markets, making good on the heretofore empty promise of energy security and lower prices for American consumers.
Schumer responded pre-emptively to Republican efforts to trot out the same old, tired, long-ago-debunked lies about the fantastical thousands of jobs KXL will produce. "Our Republican colleagues say that this is a jobs bill but that really is not true at all," Schumer said. "And so Democrats are dubious of this, but we’re going to introduce amendments to make it more of a jobs bill" by adding requirements that will increase domestic manufacturing. To that end, the Democratic amendments will also include commitments to renewable energy sources, such as wind and solar.
But even with all of these add-ons, Schumer believes President Obama still should veto the bill. "These amendments will make it better but certainly not good enough at this point in time," he said. "We need a much different energy policy."
A good example of that might come from California, where the governor just issued a challenge to make the state's energy supply 50-percent renewable within 15 years. "I envision a wide range of initiatives: more distributed power, expanded rooftop solar, micro-grids, an energy imbalance market, battery storage, the full integration of information technology and electrical distribution and millions of electric and low-carbon vehicles," said Gov. Jerry Brown (D), now serving his fourth term as executive of the nation's most populous state.
Brown is no dilettante on green energy. He made the issue a focal point of the first term of his current administration, and during his previous eight-year stay in the governor's office from 1975 to 1983, California began building its first large-scale solar and wind power plants. California may have a leg up on the rest of the nation as far as transitioning to greener energy.
According to the U.S. Energy Information Administration, California ranks 49th in the nation in per-capita energy use, thanks to long-established efficiency standards and investment in renewables. "In 2013, California ranked fourth in the nation in conventional hydroelectric generation, second in net electricity generation from other renewable energy resources, and first as a producer of electricity from geothermal energy," the EIA said. Home solar use in California has surged in recent years, owing in large part to a large number of generous incentive programs offered throughout the state.
Meanwhile, corporate bill mill ALEC is hellbent on blocking the growth of home solar. In state after state, Republican legislators are introducing bills to eliminate incentives, and create new fees and taxes to actively disincentivize investment in renewable energy. This, of course, helps nobody except entrenched power utilities and fossil fuel companies.
It doesn't have to be that way, though. Around the world, and especially in Europe, there are examples of how successful green energy can be, and how it can create jobs as well. The UK and Germany have "smashed" wind power records, while Scotland is looking at the real possibility of going fossil fuel-free within 15 years. Germany has long recognized the benefits of renewables, and through a system of government incentives, solar use has grown to the extent that more than 50 percent of the country's energy needs can be provided by photovoltaic cells. That's what can happen when the government sets itself to establishing a green economy; the European Union has an entire department committed to building the renewable industry to provide 20 percent of the energy used in the entire continent within five years.
For the next two years of Congress in GOP hands, wedded as it is to the fossil fuel industry, such a development in the U.S, exists only in the realm of pipe dreams and fairytales. Bu for now, at least, we can find hope that this president is not going to be bullied into committing our future to a dying technology that's killing the planet.
Energy
Environment
Guest Contributor
PR Watch Admin