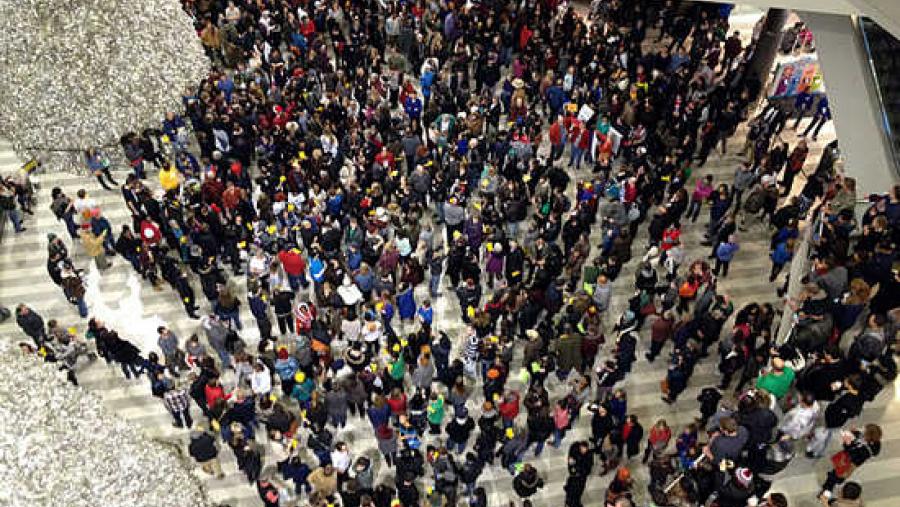 Minnesotans protesting police violence and institutional racism could face "staggering" fees and criminal charges for a protest at Mall of America, with the City of Bloomington announcing plans to force organizers to pay for the mall's lost revenue during the exercise of their free speech rights, highlighting important questions about free speech in an era of privatized public spaces.

"Youth leaders of color [are] under attack," Black Lives Matter-Minnesota said in a statement. "It’s clear that the Bloomington City government, at the behest of one of the largest centers of commerce in the country, hopes to set a precedent that will stifle dissent and instill fear into young people of color and allies who refuse to watch their brothers and sisters get gunned down in the streets with no consequences."

Around 3,000 people flooded the mall on Saturday, December 20, to sing carols and chants following police killings of unarmed African-American men like Eric Garner, Michael Brown, Tamir Rice, and Dontre Hamilton. The protests were peaceful, and some mall workers stepped outside of their businesses and raised their hands in support. Police closed around 80 stores during the two-and-a-half hour protests, and locked down several mall entrances.

Days after the action, Bloomington City Attorney Sandra Johnson announced that she will not only seek criminal trespass and unlawful assembly charges against the protesters, but will also seek to have them pay for the mall's lost revenue and overtime for police officers--a cost that she says will be "staggering."

Can the Mall of America prohibit the exercise of free speech and assembly on its premises? And can it pick-and-choose who it allows to assemble? Last year, for example, the Mall allowed around 7,000 people to gather in the same rotunda to honor a young white man who died of cancer.

The First Amendment protects against government suppression of speech, but not private responses to the exercise of free speech and expression. And the Mall of America is considered private property, despite receiving hundreds of millions in public subsidies since it was built, including an additional $250 million approved last year.

For decades, courts have struggled with how to protect free speech in public forums that have grown increasingly privatized.

Mall "Born of a Union with Government," but Not a Public Space

In many communities, town squares and downtown business districts have largely been replaced by privately-owned shopping malls, particularly in suburban areas. In Bloomington, Minnesota, for example, there is no public space that offers the same level of visibility as a protest at the Mall of America--which is why protesters chose the location on December 20.

Even traditional public spaces like parks are increasingly owned by private entities, most famously in New York's Zuccotti Park, where Occupy Wall Street was born, and where Occupiers faced eviction after the park's owners changed the rules.

Mall of America's status as a public space under the Minnesota state constitution was challenged in the 1990s by anti-fur activists who wanted to protest outside Macy's. A Minnesota trial court initially found that, thanks to the Mall's substantial public subsidies, the Mall of America was "born of a union with government" and could only impose reasonable time, place, and manner restrictions on protest.

The Minnesota Supreme Court, though, reversed the lower court in 1998 and declared that the state constitution's protection of free speech "does not apply to a privately owned shopping center such as the Mall of America, although developed in part with public financing."

Initially, however, the U.S. Supreme Court viewed privately-owned suburban shopping malls through the same lens as the public town squares they were replacing.

In 1968, in an opinion authored by Justice Thurgood Marshall, the Court held that suburban shopping malls were serving the same public function as a town square, and therefore should be subject to similar constitutional constraints.

"The shopping center premises are open to the public to the same extent that as the commercial center of a normal town," Marshall wrote in the case, which involved the Logan Valley Mall in Pennsylvania. "So far as can be determined, the main distinction in practice between use by the public of the Logan Valley Mall and of any other business district ... would be that those members of the general public who sought to use the mall premises in a manner contrary to the wishes of the [owners] could be prevented from so doing."

Subsequent decisions, however, chipped away at that "public function" doctrine, most notably in a 1972 decision authored by Justice Louis Powell.

Powell, a former corporate lawyer who had authored the Powell Memo for the U.S. Chamber of Commerce the previous year, declared in the Lloyd Corp. v. Tanner decision that a mall does not "lose its private character merely because the public is generally invited to use it for designated purposes."

A new opening for states to protect free speech in shopping malls emerged in the 1980 Pruneyard Shopping Center v. Robbins decision. In that case, the Court opened the door to states finding that their own constitutions protect free speech in shopping malls or other privately-owned public spaces. The California constitution's broader free speech protections, for example, allow for protests and leafletting in that state's malls.

Minnesota's Supreme Court, though, came to a different outcome in that 1998 case involving the fur protesters. The state constitution, the justices declared, does not bar Mall of America's owners from limiting the exercise of free speech on mall property, or choosing to allow some forms of speech but not others.

In recent years, the First Amendment has undergone a revolution in the U.S. Supreme Court--in cases like Citizens United, Hobby Lobby, and McCutcheon--but largely in favor of expanding the "free speech rights" of corporations and the wealthy few, rather than protecting what Justice Hugo Black described in 1945 as "the poorly financed causes of little people." When average Americans raise their voices in protest, they can still be muffled by corporate interests.

...they'd be protesting abortion clinics.
Great article. Interesting that the mall was o.k. with twice the number of people gathering for another cause.. Perhaps the town should boycott the mall and buy everything online instead. I don't think that the mall could continue to exist without public support.
I'd argue that all this free publicity (remember that there's no such thing as bad publicity) the story has brought them, they've already been more than repaid.
Unrestricted, unregulated growth of corporate power has not only illegitimately usurped the Constitutional rights of a person, as well as misappropriated many of the Constitutional responsibilities of government, corporate rule has also long been abridging, infringing upon, denying, prohibiting, and otherwise violating the unalienable human and civil rights of a person. Freedom of speech and assembly, for example is an unalienable, inherent human right, even though the First Amendment only explicitly prohibits Congress from abridging that right. It doesn't explicitly prohibit the President, and it doesn't explicitly prohibit the courts from abridging freedom of speech and assembly, and it doesn't explicitly name and prohibit corporations from doing so, either. But that doesn't mean that we the people don't have those rights. Constitutional rights are a particular selection of unalienable human rights. Even though the Constitution does not (and can not) explicitly and fully describe and protect ALL unalienable, inherent human rights, and in some cases does not explicitly prohibit artificial private legal entities from violating certain Constitutional rights, that does not in any way mean that those unalienable, inherent human rights do not exist. The 10th Amendment explicitly states that "The powers not delegated to the United States by the Constitution, nor prohibited by it to the States, are reserved to the States, respectively, or to the People". Despite the 10th Amendment, unjustifiable judicial mis-interpretation of the Constitution has increasing placed corporations in a vastly superior position to human beings, and allowed corporate power to notoriously violate the unalienable human rights of people with impunity. Corporations do not legitimately have the Constitutional rights of a person. And corporations do not have any right to violate our unalienable human rights, either.