Koch-Tied Group Urges Stoners Not to Vote for Mary Burke 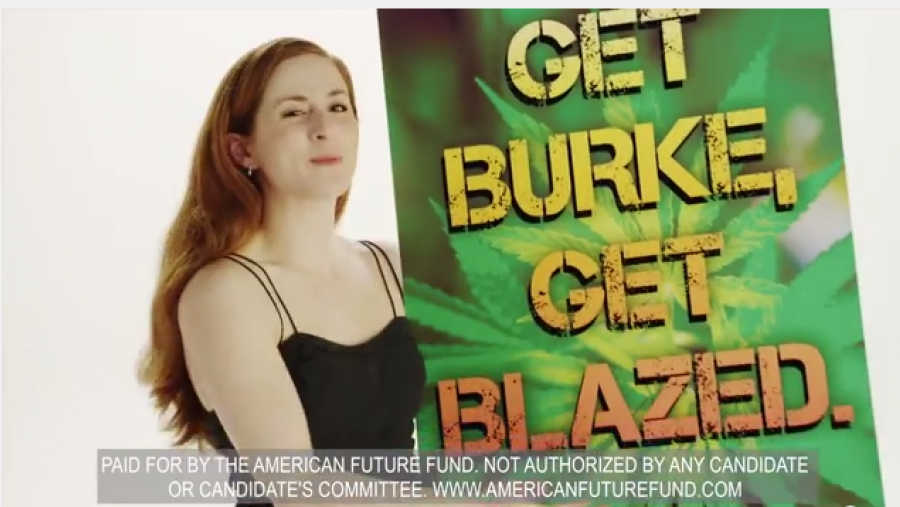 The Koch-backed American Future Fund is running a series of web-only ads urging Wisconsin stoners not to vote for Democratic gubernatorial candidate Mary Burke, but instead to support the Libertarian Party candidate, Robert Burke.

The nine ads are silent on the candidate that has received millions in outside support from the Koch network, Scott Walker. The American Future Fund has run ads supporting Walker in past elections.

The ads feature caricatures of potheads urging viewers to "get Burke, get blazed," and to "light it up, take a puff, and vote for Robert Burke."

"It's time to clear the air about who will legalize marijuana in Wisconsin," a stoner says in one ad, as she waves away what is presumably pot smoke. "It's not Mary Burke."

Both Mary Burke and Robert Burke ripped AFF's latest campaign as a cynical, last-minute effort to peel off the Democratic candidate's supporters in a race that is likely to be exceptionally tight. Mary Burke supports medical marijuana (which AFF does not mention) but has not called for its full legalization. Walker opposes marijuana for medical or recreational uses, repeating the discredited claim that pot is a "gateway drug," and in recent months has called for drug testing for public aid recipients.

In the last election cycle, AFF received at least 92 percent of its funding from two conduits for Koch network funding, the Center to Protect Patient Rights (which gave AFF $49.2 million) and Freedom Partners (which gave $13.6 million). Both groups are led by Koch operatives.

Robert Burke, the Libertarian Party candidate AFF's ads purported to support, is taking a pass on the group's unexpected appeal to the Wisconsin toker voter.

"The purpose of the ad is to draw young liberal voters from Mary Burke to vote for Robert Burke. While I endorse the full legalization of Cannabis I do not endorse in any way the message of this ad," Robert Burke said in a blunt statement. "I support responsible use for personal and medical consumption."

"Obviously they want to try to use me to siphon votes away from Kay Hagan and maybe swing the election to Thom Tillis," Haugh told NPR.

The Kochs are described by their fans as genuine libertarians, rather than partisan moneybags aimed at electing Republicans who will push a deregulatory, anti-tax agenda that benefits the Kochs' industrial operations and augments their personal wealth. Yet, their funding network has long bankrolled organizations with anti-libertarian views that work to elect Republican candidates. This includes right-wing religious groups that oppose gay marriage and abortion rights, like Concerned Women for America, which has received at least $11.4 million from the Koch network since 2010, and Focus on the Family spinoff Citizen Link, which has received at least $10 million, including at least $885,000 this election cycle.

The AFF ads purportedly supporting the Libertarian Party candidate in Wisconsin don't appear to help the libertarian cause. The actors are caricatures of stoners, giggling as they consider who might be on the "Mount Rushmore of weed."

Besides trying to peel-off Mary Burke supporters, "the additional purpose of the ad was to drive what are generally known as 'Liberty Republicans' away from my free market, anti-crony, anti-Wisconsin Economic Development Corporation stance through a divisive social issue," Robert Burke said.

As a 501(c)(4) nonprofit, AFF keeps its donors secret, and any grants it received in 2014 from Koch foundations or non-profits won't be made public until later next year. Donations from individuals or for-profit corporations will remain largely untraceable. Freedom Partners has denied giving AFF any funding over the last two years, but there has been no similar statement from the group that gave AFF the majority of its funding in 2012, the Center to Protect Patient Rights, which has been rebranded as American Encore after paying a record $1 million fine for campaign finance violations in California.

In the final weeks of Wisconsin's 2012 recall elections, the Center to Protect Patient Rights bankrolled a $400,000 ad blitz telling voters that "recall is not the Wisconsin way" and urging Walker's reelection; the source of the funding was not known until the Center for Media and Democracy uncovered it this year.

Burke says he has little use for cash from the Koch network.

"I have run a donationless campaign principally because I wanted the people of Wisconsin to know without a moment of doubt that the ideas I support and the positions I take are mine," he said. "No one bought me; no one influenced me, and no one owns me."