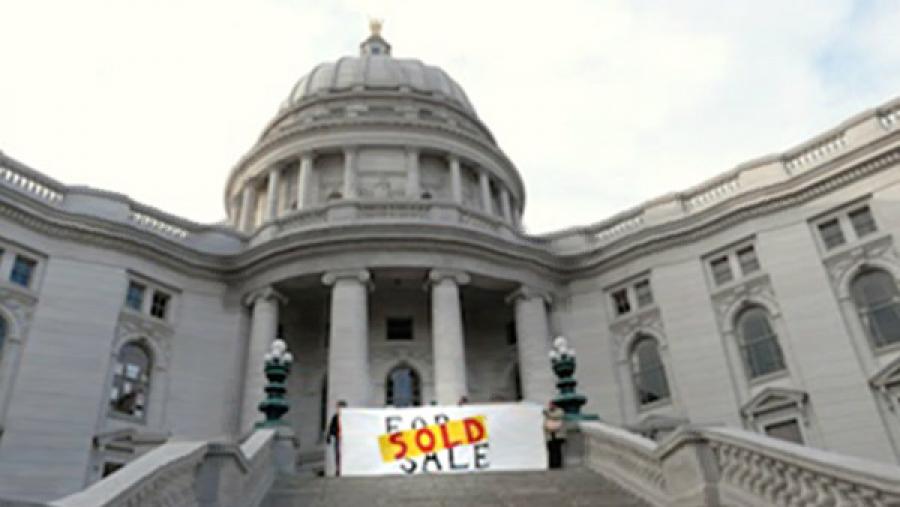 A hole in Wisconsin's campaign finance laws opened by federal judge Rudolph Randa in September is being exploited by out-of-state billionaires like Sheldon Adelson, blowing open the floodgates to huge checks for the state's gubernatorial candidates in the final weeks and days of this hotly-contested race.

Judge Randa, a member of the Milwaukee Federalist Society's board of advisors and a regular attendee at Koch- and Bradley-funded judicial junkets, has single-handedly opened Wisconsin elections to out-of-state billionaires like no judge before him. Thanks to a pair of his recent decisions, millions of dollars in disclosed six-and seven-figure checks have flowed into campaign accounts of the gubernatorial and Attorney General candidates in recent weeks, and an unknown amount of secretly-funded expenditures have been coordinated with candidates.

"Randa is easily the least impartial judge in the history of Wisconsin jurisprudence and has done more damage to this state's once proud and admired reputation as a haven for honest, clean and untainted state government than any other Wisconsin judge since our founding in 1848," says Jay Heck, Executive Director of Common Cause Wisconsin.

Judge Randa first made news in May when he issued an extraordinary ruling halting the criminal campaign finance investigation into Governor Scott Walker's campaign, declaring that candidates and "dark money" nonprofits have a First Amendment right to coordinate over ads that don't expressly tell viewers how to vote (and ordering the destruction of evidence). That ruling was reversed by a unanimous decision from the 7th Circuit in September, with conservative jurist Frank Easterbrook calling Randa's decision "imprudent," "unnecessary," and an "abuse of discretion."

Just a few months later, Judge Randa sided with a separate challenge to a Wisconsin law capping the aggregate amount that candidates can accept from political action committees and parties.

As a result of that ruling, individuals can now give unlimited amounts of money to the state political parties, and the parties can then funnel those funds directly to candidates. This gives the wealthy few an easy way to bypass the $10,000 individual contribution limit that still applies to gubernatorial candidates. Although a donation to the party can't be earmarked for a particular candidate, donors can be almost certain their funds will be used to support candidates at the top of the ticket or facing hotly contested races.

And that is precisely what has happened in the wake of his decision, among both political parties.

On October 23, casino magnate Sheldon Adelson made a $650,000 donation to the Republican Party of Wisconsin. That same day, the GOP transferred $450,000 to Walker's campaign account.

Adelson wasn't the only billionaire taking advantage of the Randa ruling. The Republican Party also received $1 million from Beloit billionaire Diane Hendricks, with whom Walker was caught on tape discussing his yet-to-be-introduced anti-union Act 10 legislation in early 2011 as part of a "divide and conquer" strategy.

Other top donors to the Republican Party of Wisconsin include Robert Rasmus, a CEO of Hi-Crush GP, a frac sand producer that operates primarily in Wisconsin. He gave $200,000.

Michigan billionaires Richard and Helen Devos also gave $200,000, together. The Devos' are among the top funders of school privatization initiatives nationwide, and their American Federation for Children group spends millions electing pro-privatization candidates. The American Federation for Children is also a member of the American Legislative Exchange Council.

St. Louis oligarch Rex Sinquefield -- the subject of a recent Center for Media and Democracy report -- gave $100,000 to the Republican Party of Wisconsin. Sinquefield has spent tens of millions trying to reshape Missouri laws, legislators, and policies according to his own ideological mold, including over $1 million to 2012 U.S. Senate candidate Todd Akin (80% of which came after his "legitimate rape" comments). Sinquefield founded and funds the Show-Me Institute, a State Policy Network affiliate and ALEC member.

Another $100,000 came from Marlene Ricketts, wife of Ameritrade founder Joe Ricketts, who started the Ending Spending Action Fund, which has spent $21 million on the 2014 elections.

Other $100,000 contributions to the Republican Party of Wisconsin came from Milwaukee's Jeré Fabick, president of FABCO Equipment, Missouri's Stanley Herzog, and Denver hospitality executive Michael Shannon. Shannon and his wife have also given $2 million to the Republican Governors Association, which has spent twice that amount supporting Walker this cycle.

Democrats have also benefitted. Schlitz beer heiress Lynde Bradley Uihlein, for example, gave $1 million to the state party. Uihlein is a top donor to Democratic groups and liberal causes, such as Emily's List and the League of Conservation Voters, both of which have spent millions on Wisconsin's gubernatorial race.

Besides Uihlein, other top donors to the Democratic Party of Wisconsin include Milwaukee County Executive Chris Abele, who gave $80,000. Mary Burke's brother John and her mother Elaine each gave $40,000.

However, this isn't the only crack in Wisconsin's campaign finance laws that Judge Randa created just before the November elections. In a separate decision, in a separate challenge to Wisconsin's clean election statutes, just a few weeks ago Randa gave donors a new way to keep their unlimited contributions hidden from the public, but likely known to candidates.

In October, Randa issued a preliminary injunction blocking the enforcement of Wisconsin's issue ad coordination laws for the final weeks of the 2014 elections, in the case Citizens for Responsible Government v. Barland. The effect of this ruling is that wealthy donors can now give unlimited donations to third-party groups coordinating with candidates over "issue ads" -- and most importantly, they can keep those donations secret.

This was precisely the conduct under investigation in the "John Doe" criminal probe. Prosecutors uncovered extensive evidence of Walker raising money from out-of-state billionaires, millionaires, and for-profit corporations, with six- and seven-figure donations subsequently (and secretly) being deposited in Wisconsin Club for Growth's account. Walker knew where much of the money was coming from, but the public did not, making it impossible to know whether a donation later resulted in favorable treatment.

The Citizens for Responsible Government lawsuit was filed by a group with close ties to Wisconsin Club for Growth, and using the same Washington D.C.-based attorneys that represented the Club in its failed challenge to the Walker criminal probe. The Milwaukee Journal Sentinel reported that the attorneys drafted their pleadings in a way to guarantee that the case would land in Randa's court.

It is almost impossible to know whether any of the millions in outside "issue ad" spending in the governor's or other races were coordinated with candidates for office.