The ruling this week by a World Trade Organization (WTO) compliance panel against U.S. country-of-origin meat labeling (COOL) policies sets up a no-win dynamic, and the Obama administration should appeal. 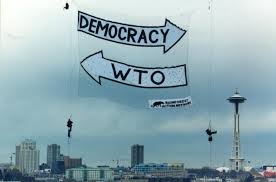 If the administration were to weaken COOL, U.S. consumers would lose access to critical information about where their meat comes from at a time when consumer interest in such information is at an all-time high and opposition would only grow to the administration's beleaguered trade agenda. If the administration again were to seek to comply with the WTO by strengthening COOL, then Mexico and Canada -- the two countries that challenged the policy -- likely would continue their case, even though cattle imports from Canada have increased since the 2013 strengthening of the policy.

The ruling further complicates the Obama administration's stalled efforts to obtain Fast Track trade authority for two major agreements, the Trans-Pacific Partnership and the Trans-Atlantic Free Trade Agreement. Both of these pacts would expose the United States to more such challenges against U.S. consumer, environmental and other policies.

"Many Americans will be shocked that the WTO can order our government to deny U.S. consumers the basic information about where their food comes from and that if the information policy is not gutted, we could face millions in sanctions every year," said Lori Wallach, director of Public Citizen's Global Trade Watch. "Today's ruling spotlights how these so called 'trade' deals are packed with non-trade provisions that threaten our most basic rights, such as even knowing the source and safety of what's on our dinner plate."

The WTO compliance panel decided that changes made in May 2013 to the original U.S. COOL policy in an effort to make it comply with a 2012 WTO ruling against the law are not acceptable and that the modified U.S. COOL policy still constitutes a "technical barrier to trade." The panel decided that the strengthened COOL policy afforded less favorable treatment to cattle and hog imports from Canada and Mexico, despite a 52 percent increase in U.S. imports of cattle from Canada under the modified policy. The panel stated that the alleged difference in treatment did not "stem exclusively from legitimate regulatory distinctions."

The United States has one chance to appeal this decision before the WTO issues a final, binding ruling. Under WTO rules, if the U.S. appeal fails, Canada and Mexico would be authorized to impose indefinite trade sanctions against the United States unless or until the U.S. government changes or eliminates the popular labeling policy.

Today's ruling follows a string of recent WTO rulings against popular U.S. consumer and environmental policies. In May 2012, the WTO ruled against voluntary "dolphin-safe" tuna labels that, by allowing consumers to choose to buy tuna caught without dolphin-killing fishing practices, have helped to dramatically reduce dolphin deaths. In April 2012, the WTO ruled against a U.S. ban on clove-, candy- and chocolate-flavored cigarettes, enacted to curb youth smoking. In each of those cases, U.S. policy changes made to comply with the WTO's decisions also have been challenged before WTO panels similar to the one that issued today's ruling.

"The WTO again ruling against a popular U.S. consumer protection will just spur the growing public and congressional concerns about the big Pacific and European trade deals the administration is now pushing and the Fast Track authority to railroad through Congress more agreements that undermine basic consumer rights," said Wallach.

The COOL policy was created when Congress enacted mandatory country-of-origin labeling for meat -- supported by 92 percent of the U.S. public in a recent poll -- in the 2008 farm bill. This occurred after 50 years of U.S. government experimentation with voluntary labeling and efforts by U.S. consumer groups to institute a mandatory program.

In their successful challenge of COOL at the WTO, Canada and Mexico claimed that the program violated WTO limits on what sorts of product-related "technical regulations" signatory countries are permitted to enact. The initial WTO ruling was issued in November 2011. Canada and Mexico demanded that the United States drop its mandatory labels in favor of a return to a voluntary program or standards set by an international food standards body in which numerous international food companies play a central role. Neither option would offer U.S. consumers the same level of information as the current labels. The United States appealed.

The WTO Appellate Body sided with Mexico and Canada in a June 2012 ruling against COOL. The U.S. government responded to the final WTO ruling by altering the policy in a way that fixed the problems identified by the WTO tribunal. However, instead of watering down the popular program as Mexico and Canada sought, the U.S. Department of Agriculture responded with a rule change in May 2013 that strengthened the labeling regime. The new policy provided more country-of-origin information to consumers, which satisfied the issues raised in the WTO's ruling. However, Mexico and Canada then challenged the new U.S. policy. With today's ruling, the WTO has announced its support for the Mexican and Canadian contention that the U.S. law is still not consistent with the WTO rules.

The article originally appeared at the Public Citizen blog Eyes on Trade.