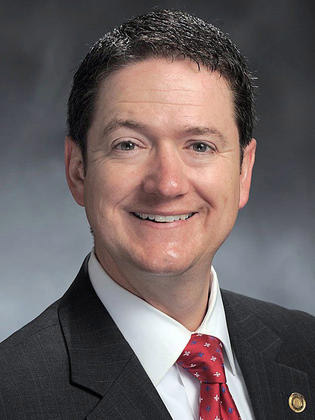 The protests that erupted in the wake of 18 year old Michael Brown's death at the hands of a Ferguson, Missouri police officer in August have many causes, ranging from longstanding tensions between the largely African-American community and a largely white police force, systematic targeting of people of color fueled in part by revenue-driven law enforcement practices, residential segregation, and disparities in racial power arising from under-representation in local government thanks in part to Ferguson's unusual elections calendar.

Yet a leader of the American Legislative Exchange Council (ALEC) in , says he has the solution to unrest in Ferguson: bust the unions.

Missouri Digital News reported Wednesday that: "Republican Speaker of the House Tim Jones said the legislature could pass right-to-work legislation and that would instantly help economic development in and around Ferguson."

"One of the biggest things we can do is become the 25th right to work state in the country and give workers freedom. Missouri is now an oasis of big labor influence and power. If you look at a map of the country, we're nearly surrounded by states that have gone to worker freedom states."

On twitter, Jones confirmed that his remarks were not taken out of context:

House Speaker Jones was the ALEC co-chair for Missouri until this year, and is a member of the ALEC Education Task Force. He has also been an unapologetic birther, and joined a 2009 lawsuit seeking to have President Obama removed from office on grounds that he was secretly an Indonesian named Barry Soetoro.