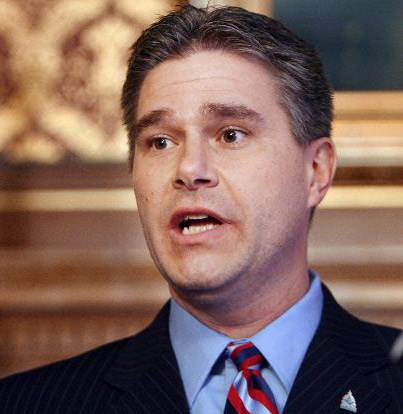 Wisconsin Attorney General J.B. Van Hollen's refusal to defend the Government Accountability Board in a federal lawsuit challenging the investigation into Governor Scott Walker and his allies is a reversal of his office's earlier position, could have grave implications for openness in the state, and undermines the GAB's role in enforcing the state's campaign finance laws. It isn't the first time that Van Hollen has put politics above government transparency.

Last week, Van Hollen refused to defend the GAB in a federal lawsuit filed by a group tied to Eric O'Keefe, a target of the investigation. The suit is seeking to declare the GAB's longstanding interpretation of state campaign finance law unconstitutional. In a letter to the GAB, Van Hollen's office claimed that the agency charged with interpreting and applying Wisconsin campaign finance law was advancing a "tenuous legal position."

A GAB loss in the federal suit would have the effect of ending the "John Doe" investigation into illegal coordination between Governor Scott Walker and independent groups. But it would also sanction coordination between candidates and secretly-funded "dark money" nonprofits, undermining disclosure laws and greatly increasing the likelihood of political corruption.

The legal wranglings around the investigation have largely been a dispute over the scope of Wisconsin campaign finance law.

The GAB and the bipartisan group of district attorneys leading the probe are relying on an interpretation of state law established in 1999 by the Wisconsin Court of Appeals, in the precedent-setting case Coalition for Voter Participation v. Elections Board. In that case the appellate court found that, under Wisconsin law, electoral "issue ads" that don't expressly tell viewers how to vote will be counted as campaign contributions if coordinated with a candidate. Those "contributions" will violate Wisconsin law if they exceed donation limits and are not disclosed.

The Walker campaign and groups like Wisconsin Club for Growth have claimed that the Coalition for Voter Participation precedent is no longer enforceable, and that such coordination is entirely permissible because the statutes are silent on "issue ads." In January, John Doe Judge Gregory Peterson sided with their position and quashed subpoenas that had been issued in the probe, although he noted that the GAB and the county district attorneys leading the probe had "an arguable interpretation of the statutes" and that "an appellate court may indeed agree" with their interpretation.

"In the Attorney General's view, Judge Peterson's order reflects a correct interpretation of the Wisconsin Statutes," Assistant Deputy Attorney General Dan Lennington wrote in his letter to the GAB, noting that the DOJ also faces a conflict of interest since it is representing Peterson in other challenges. Lennington wrote that the DOJ could get around the conflict by building "conflict walls" around attorneys, but said "we will not construct those walls to advance the tenuous legal positions asserted in the GAB's prior filings."

This appears to be a reversal of the DOJ's earlier position on the matter.

Van Hollen was favorably citing the Coalition for Voter Participation case as controlling precedent as recently as 2011, when the alleged coordination between the Walker campaign and Wisconsin Club for Growth began. This is significant, because Wisconsin Club for Growth and others are claiming that the decision's holding on issue ad coordination had been rendered unenforceable well in advance of the 2011-2012 recall elections. In 2011, before the investigation into Walker and outside groups began, Van Hollen apparently didn't agree.

Plus, in January of last year, while the investigation was still under wraps, the GAB asked the Attorney General to lead the John Doe investigation, and his office considered the matter for a full six months before declining in August 2013. Yet in doing so, Van Hollen did not reject the legal premise of the probe -- he instead cited a conflict of interest. If the GAB's position is tenuous now, it was tenous then, but Van Hollen didn't say so.

What has changed? The investigation has become public, and is now an issue in the close race for governor. Portraying the probe as legally "tenuous" bolsters candidate Walker's claims that he "has done nothing wrong." The 7th Circuit's decision four months ago in Barland II struck down some Wisconsin limits on independent spending, but left intact the rules that apply to candidates and campaign contributions.

The Attorney General's position on Wisconsin law will have repercussions beyond the immediate investigation. If candidates can work closely with groups that take secret, million-dollar donations, then the disclosure requirements and contribution limits that apply to candidates become optional. This opens the door to new levels of secrecy in election spending, and with it, political corruption: elected officials will know exactly who greased their campaign wheels, but the public is left in the dark, making it impossible to trace whether politicians reward donors with secret favors.

This isn't the first time that Van Hollen has pulled down the shades on government transparency for apparently political purposes.

Last year, when the Center for Media and Democracy filed a public records lawsuit against American Legislative Exchange Council (ALEC) board member Senator Leah Vukmir, Van Hollen's office took the extraordinary step of asserting that legislators are entirely immune from civil suit based on a novel interpretation of the Wisconsin Constitution. If upheld, this interpretation would have rendered the public records law optional, since legislators could never be sued for their failure to comply.

Just two years before Van Hollen invoked this "nuclear option" in defending Republican Senator Vukmir, his office altogether declined to represent Senator Jon Erpenbach, a Democrat, in a public records suit filed by the MacIver Institute. Van Hollen "refused to provide any counsel other than to tell me to acquiesce to the conservative organization's request," Erpenbach said. The Republican Attorney General never advised the Democratic senator that legislators were supposedly not subject to civil suit, as he did with Republican Senator Vukmir.

After nearly a year of litigation, CMD prevailed in its lawsuit against Vukmir, and the senator released hundreds of records that she previously denied were in her possession. The Attorney General's office withdrew their claim of immunity as part of the settlement agreement.