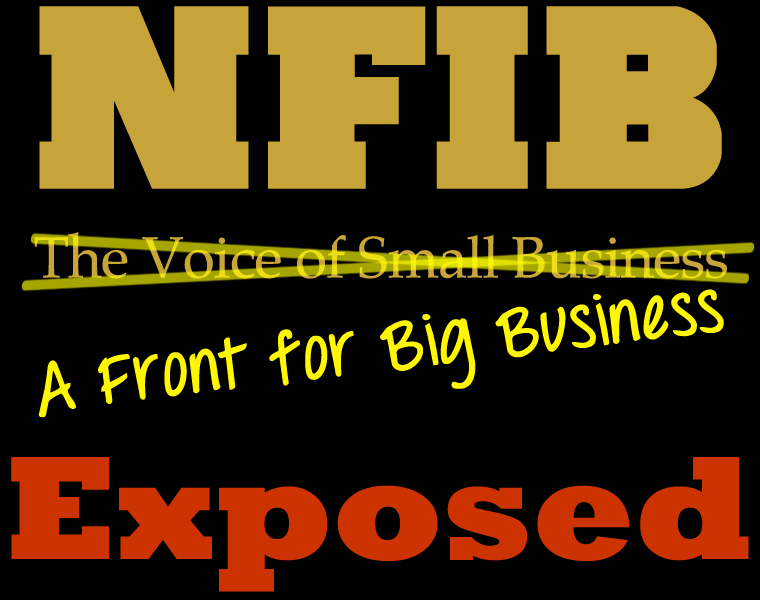 The NFIB purports to represent small business, but receives much of its funding from big business interests including the Kochs, the far-right Bradley Foundation, and Karl Rove's Crossroads GPS -- which are the same groups that have long supported Walker.

The NFIB uses those funds to fight paid sick days for workers, fight the expansion of health care, and fight efforts to raise the minimum wage at the state level. NFIB claims to be bipartisan but 90 percent of its donations go to Republican candidates -- when small business owners themselves are split evenly between Democrats, Republicans, and independents.

The "Koch brothers' secret bank," Freedom Partners, gave NFIB $1.5 million in 2012, and gave the NFIB's dark money political arm an additional $575,000. Another conduit for funds from the Koch network, the Center to Protect Patient Rights, gave NFIB $135,783 in 2012. The Koch network, of course, has been among Walker's biggest supporters: David Koch boasted in 2012 that "we spent a lot of money in Wisconsin," and his Americans for Prosperity group spent $10 million during the recalls.

In addition, the NFIB's legal arm received $300,000 from the Bradley Foundation between 2010 and 2012. Bradley's president and CEO, Michael Grebe, was Walker's campaign chairman in 2010.

The NFIB also received $3.7 million in 2010, and an additional $1.4 million in 2012, from Crossroads GPS, the dark money political operation run by Karl Rove. Crossroads GPS ran ads supporting Walker's policies in 2011, and recently-unsealed documents showed Walker writing to Rove at the height of the recalls asking for support.

The NFIB endorsed Walker in 2010, and again in the 2012 recall elections, and the group's stamp of approval is used by candidates across the country as evidence that they are pro-small business. In endorsing Walker this year, NFIB Wisconsin director Bill G. Smith asserted that "small business is a central priority" for the Walker administration, and that an astounding 98 percent of NFIB members picked Walker over challenger Mary Burke.

Not so fast, say small business owners in Wisconsin.

"I would love to see the survey methodology behind NFIB's figures" says Lori Compas, Executive Director of the Wisconsin Business Alliance, a statewide group of independent Wisconsin-owned businesses.

"Most small business owners are members of the middle class, so they tend to favor policies that expand opportunities for everyone -- things like public education funding, broadband access, renewable energy, and access to health care," said Compas, who ran for state senate as a Democrat in 2012. "Scott Walker and his allies in the state legislature are actually blocking such policies."

"The extent of [Walker's] jobs plan seems to be offering tax breaks to large corporations -- many of them campaign donors, by the way -- and passing legislation like the mining bill, which benefits a single $700,000 contributor at the expense of small business owners in agriculture, tourism, and other economic sectors," Compas said.

One of Walker top legislative priorities last session was a rewrite of environmental laws to pave the way for a massive open-pit iron ore in Wisconsin's pristine northwoods, which would benefit a single out-of-state mining company, Gogebic Taconite. Documents released as part of the ongoing "John Doe" criminal probe into possible illegal campaign coordination showed Gogebic Taconite making a secret $700,000 donation to Wisconsin Club for Growth, an "independent" group that Walker allegedly worked with during the 2012 recall elections and which was led by Walker's top campaign advisor.

The NFIB supported the mining bill, of course, claiming that 82 percent of its members supported it.

The NFIB's state director for Wisconsin is Bill G. Smith, who is also the president of the Wisconsin Civil Justice Council, a business-backed "tort reform" group whose representatives attend meetings of the American Legislative Exchange Council (ALEC). Smith is also on the board of the Wisconsin Economic Development Corporation (WEDC), Walker's scandal-plagued jobs agency that spent around $203 million in taxpayer dollars to create just 5,840 jobs, lost track of around $12 million, and awarded economic development grants to companies that then outsourced Wisconsin jobs.

Governor Walker quickly thanked NFIB for its endorsement, and rolled out a theme that will likely underpin future campaign ads touting the NFIB's support: "With more than 100,000 new jobs and 25,000 new businesses created in the last four years we're making Wisconsin a better place to do business," Walker said.

But the "25,000 new businesses" that Walker cited is a significant distortion. The Milwaukee Journal Sentinel ripped the numbers apart, noting that it includes a range of non-profit and for-profit corporations registered with the Department of Financial Institutions since 2011, including little league teams, girl scout troops, and even Koch-backed dark money nonprofits that materialized to support Walker during the recall. The Journal Sentinel noted that Wisconsin has actually only created between 6,657 and 8,082 new "business establishments" since Walker took office, based on federal Bureau of Labor Statistics numbers, and even those numbers are likely an overstatement: one business can consist of multiple establishments.

And, the 100,000 new jobs created -- in the midst of a national economic recovery? That number still puts Wisconsin 33rd in job growth among the 50 states and last in the midwest, and amounts to less than half of the 250,000 job promise that Walker first made in 2010 and recommitted to in 2012.

Learn more about the NFIB and its agenda in our Sourcewatch profile.