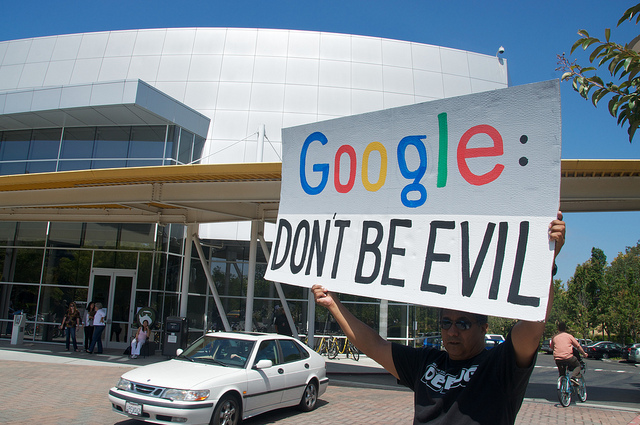 The Center for Media and Democracy (CMD) has joined more than 50 watchdog, advocacy, and labor groups in sending a letter to Google asking it to cut its ties to the American Legislative Exchange Council (ALEC). Google has not responded, telling the trade publication Ars Technica, "we aren't going to be commenting on this letter" and refusing to respond to repeated requests for comment made by the International Business Times.

Microsoft recently cut ties to ALEC, as CMD reported, prompting many to ask, "Will Google be next?"

CMD has reported on Google's new ties to ALEC as well as its "substantial" funding of other right wing groups -- Grover Norquist's Americans for Tax Reform, the Federalist Society, the American Conservative Union, and the political arm of the Heritage Foundation that led the charge to shut down the government over the Affordable Care Act: Heritage Action.

As the letter says, "Over the last year, hundreds of thousands of Americans have signed petitions asking Google to end its ALEC membership because of their concerns about the harmful role ALEC has played in our democratic process.

The domestic criticism comes at a time when Google is taking a lot of heat internationally over monopoly and privacy issues, as the New York Times reports.

Watchdog group Common Cause told Ars Technica, "In addition to paying to be a member of ALEC ($12,000 - $25,000 per year), Google and Facebook both pay to be a member of ALEC’s Communications and Technology Task Force ($5,000 per year). If they sponsor a workshop, training, or party during ALEC’s conferences, that is an additional amount (somewhere around $40,000 per event), plus conference fees to send their lobbyists/executives to ALEC conferences, plus any additional funding they give to ALEC or ALEC scholarship accounts. All of this funding is considered charitable contributions to a 501(c)(3). Google may write it off as a tax write-off."

It is not known why Google started funding ALEC, but Common Cause Program Director Todd O'Boyle suggested, "[Google] might be concerned about right-of-way and video franchising related to Google Fiber, or maybe they want to work on state tax issues."

ALEC opposes net neutrality, which the International Business Times concisely defines as "a set of guidelines that force Internet service providers to treat all Internet traffic... the same."

Google used to be vocal in its support for net neutrality. It "changed its tone in a Public Policy announcement published last month, saying the company has entered into a partnership with Verizon to publish a proposal outlining the best way to 'move the network neutrality debate forward constructively.'"

Then Google posted a "Take Action" alert urging supporters to "Join Take Action to support a free and open Internet," saying in part, "We believe that consumers should continue to enjoy open on-ramps to the Internet." Ars Technica broke the news of the shift-back and reported it as "evidence that Google has changed its mind on whether net neutrality rules should apply to wireless networks."

The Progressive published a report by Democratic Wisconsin Representative Chris Taylor on the unsuccessful attempt by a representative of Facebook, Yahoo, and eBay to convince a room full of ALEC members in the petroleum industries to work with the renewable energy industry. "By the end of the day," Rep. Taylor wrote, "any hope for a reasonable dialogue around renewable energy had totally evaporated."

Americans continue to tell Google CEO Larry Page to cut ties with ALEC here. And Forecast the Facts Action and Sum of Us has launched a campaign to #DisruptDenial, asking people to "tell the CEOs of Google, UPS, Ebay, Ford, and Microsoft" to "live up to your public commitments" and "stop bankrolling climate change deniers in Congress" here.

You don't need to google "two faced" To know what's going on here, do you?