The Case that Could Decide KXL | PR Watch

The Case that Could Decide KXL 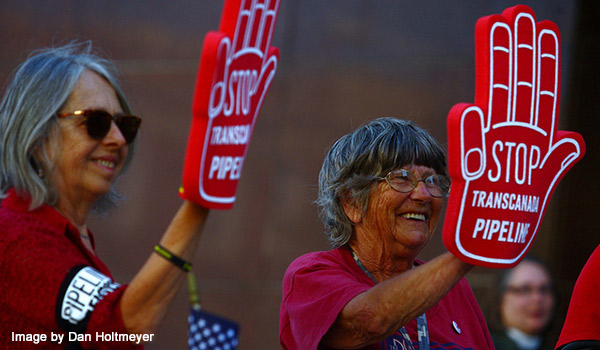 It's not often that a state court hears a case that has global consequences. But it's about to happen, and the public will have a ringside seat to watch the fight.

This Friday, September 5, the Nebraska Supreme Court will hear arguments in Thompson v. Heineman, the state's appeal from the lower court decision that put Keystone XL on hold. The lower court held that the law the governor used to bypass the state's Public Service Commission and grant TransCanada eminent domain over private property for its proposed pipeline was unconstitutional.

Joe Duggan of the Omaha World-Herald wrote a thorough primer on the legal issues at stake in the case, but the short version is this: the supreme court will determine whether the plaintiffs in the case had legal standing to bring the suit, and if so, whether the pipeline is a "common carrier" under the state's constitution.

Simplifying the legalese, the court has to determine whether the plaintiffs, the ranchers and landowners who brought the lawsuit, are the right people to pursue the case. That is, did they or will they suffer legally recognizable harm as a result of the law's being passed? A Nebraska law grants standing to taxpayers under certain circumstances; the lower court thought the plaintiffs met those standards. Now it's up to the supreme court to determine whether that conclusion is legally sound.

If the supreme court approves the plaintiffs' standing, the decision will ultimately rest on the "common carrier" issue. Under Nebraska's constitution, a Public Service Commission has sole authority to regulate such things as air transport, railroads, trucking, shipping, taxicabs, buses and other services that transport passengers or products within the state for a fee. The lower court ruled that the proposed pipeline was a common carrier, and thus the law that took the routing of KXL out of the Commission's hands was unconstitutional.

As Duggan writes, "The TransCanada [friend-of-the-court] brief argues that under the Nebraska Constitution, only businesses operating within Nebraska’s borders are considered common carriers. The Keystone XL pipeline would cross multiple states."

This gets a little tricky for the corporation, because it proclaimed itself a common carrier in Texas, where that designation gave the pipeline company carte blanche to seize private property. (The Texas Railroad Commission, which regulates common carriers in that state, recently asked for public comments on a proposed rule change that would require pipeline companies to make an application justifying the claim of common carrier status.)

Not even TransCanada's selective memory and contradictory arguments are going to resolve this case. It's a given in law that a party can make multiple, incompatible claims in the same case, let alone separate cases, and TransCanada is not actually a party to this case.

But the legal rhetoric isn't going to sway TransCanada's harshest critics in the state. The activists at Bold Nebraska have been hounding the company and its Big Oil allies since the project first set down markers across farms and ranches. And they plan to continue their fight right on the supreme court's doorstep, with a rally before Friday's hearing.

"Nebraska laws are not for sale. Nebraska landowners are not for sale," Bold Nebraska's executive director and relentless thorn in Big Oil's side, Jane Kleeb, told PipeLies Exposed. "TransCanada came into our state thinking they could buy their way through our state capitol and through land that has been passed down by generations. Farmers and ranchers stand ready to defend their property rights and defend our state constitution from a foreign corporation and government that turned its back because it was easier to listen to lobbyists."

The future of the KXL fight might hinge entirely on the Nebraska decision. While federal courts have jurisdiction to hear cases about the pipeline's safety and security, the separate states have the legal authority to determine where to route a pipeline within their borders. The route TransCanada drew in Nebraska was determined by a process that the plaintiffs say, and a lower court confirmed, violated the state constitution - an issue for the state's courts to decide.

The U.S. State Department has suspended its decision on approving the cross-border pipeline because there's no approved route through Nebraska, and during the delay, TransCanada's permit to build the pipeline in South Dakota has expired. This requires the company to begin the permitting process from scratch, with no indication where the pipeline would have to intersect the Nebraska border.

The Nebraska court's decision likely will not be released until next year, adding more delay to a process TransCanada started six years ago. But, as Kleeb has said many times, farmers and ranchers aren't fighting to delay the pipeline - they're fighting to stop it.

Though it's kept a bullish public posture on KXL, delays have punished TransCanada's stock prices, and amid reports that it's looking to increase oil-by-rail shipments, there's been speculation that it may simply walk away from the project. Industry analysts have described KXL as "a ‘nice to have’ but not a ‘need to have’ project" for the company.

For his part, Gov. Dave Heineman (R), the nominal defendant in the case, continues to toe the corporate line by repeating Big Oil's mythological jobs claims, telling an Omaha TV station, "It's too bad the court's not ruling today because again, even though we have a low unemployment rate, this would put a lot of people to work in the construction trades."

The fact that the governor would gamble with the state's irreplaceable natural resources, and its vital agricultural industry, on the promise of a handful of jobs shows just how crucial the court's decision will be.

The state's public broadcaster, NET Television, will air the hearing live on its network, and simulcast on the website, netNebraska.org/television, and also on the NET Nebraska app.