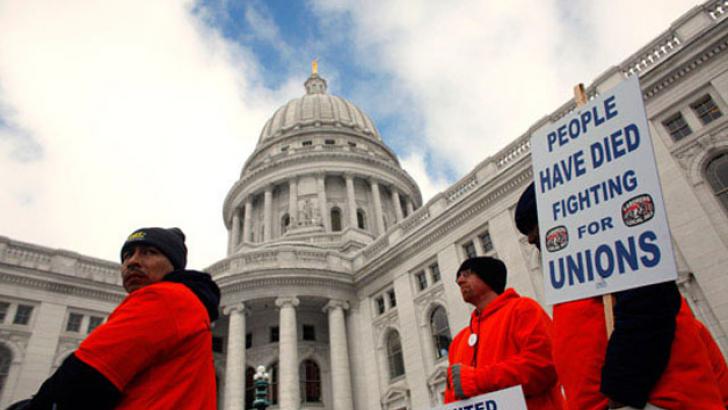 Wisconsin workers face a lousy jobs picture this Labor Day, according to a new report by the Center on Wisconsin Strategy (COWS).

In Wisconsin, the situation is considerably worse.

The report's other findings include:

Governor Walker's Act 10 caused sharp union decline: The state's public sector unionization rate has fallen from over 50 percent to 35 percent since Scott Walker and the Republican-controlled state legislature passed a controversial law ending most collective bargaining for most public employees. In Dane County, the seat of state government and the University of Wisconsin—Madison, public sector unionization fell from 55 percent in 2011 (when the anti-union Act 10 bill was introduced) to 26 percent in 2012.

Given the critical role unions play in improving compensation, working conditions, and membership in the middle class for both union and non-unionized workers, the decline of unions is never a good economic sign.

The Economic Policy Institute reports that unions raise wages by about 20 percent for their members, and 28 percent when benefits are included. The study's authors, Lawrence Mishel and Matthew Walters, also found that unions reduce wage inequality by raising wages for both low- and middle-income workers, and by setting a pay standard that nonunion employers follow.

In fact, the Economic Policy Institute reports, "the impact of unions on total nonunion wages is almost as large as the impact on total union wages."

The latest jobs numbers for Wisconsin are not good news for Governor Scott Walker, who faces a tough re-election race and constant reminders of his failed promise to create 250,000 new jobs.

The budget deficit "exposes once again how fiscally irresponsible Governor Walker has been," said his opponent Mary Burke.

Walker's campaign point to the budget shortfall the governor inherited from his predecessor, Jim Doyle, and says the state is "moving in the right direction."