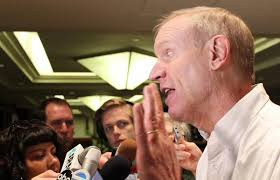 If you are not in the Chicago media market, you might not know much about Bruce Rauner, the Mitt Romney-like candidate for governor in Illinois, who is running ahead in the polls against Democratic Governor Pat Quinn.

If Rauner wins, Illinois will have a lot more in common with its neighbor, Wisconsin. Politically, Rauner resembles union-basher and school privatizer Scott Walker. Only Rauner is much, much richer.

In an interview with the Chicago Sun Times, Rauner talked about his career at GTCR, the Chicago-based private equity firm he founded.

“I made a ton of money, made a lot of money,” he told Sun Times reporter Natasha Korecki.

When Korecki asked Rauner, a billionaire who owns nine homes and made $53 million last year, if he is part of the 1 percent, he corrected her: “Oh, I’m probably .01 percent.”

Last Sunday, the Sun-Times broke the news that Rauner has made himself even richer by avoiding taxes and hiding a lot of his wealth in the Cayman Islands.

Rauner has not released his current tax returns, so the full value of his offshore accounts is not verifiable, but the Sun Times was able to document five offshore holdings by Rauner in the Caymans.

A detailed analysis by the Chicago Tribune shows that Rauner used many other complicated tax strategies "out of reach for those of more modest means" to cut his tax bill to less than half the rate paid by other earners in the top bracket:

Thanks to one business-tax strategy, Rauner paid no Social Security or Medicare taxes at all in 2010 or 2011, the Trib reports.

Meanwhile, Rauner is campaigning against “government union bosses,” and teachers unions in particular, and is targeting public employee pensions, with a plan to freeze the Illinois pension plan and convert it into a 401(k)-style retirement account, in order, he claims, to save the state billions.

He says he got into the race because he wants to "reform" public education, and is a big charter school advocate.

"I am adamantly, adamantly against raising the minimum wage," Rauner said in a campaign event captured on video in January.

He has since backed off that position, and says he supports a minimum-wage increase.

Rauner’s campaign has also had to respond to stories about his phone call to Obama's education secretary Arne Duncan, pulling strings to get his daughter into prestigious Walter Payton College Prep High School, after the school rejected her.

The Sun-Times reported in January that Rauner made a $250,000 contribution to Payton after his daughter was admitted.

Rauner's story shows what's behind all that union-bashing and belt-tightening for the poor and middle class--rightwing billionaires like Rauner push these policies, even as they play by an entirely different set of rules, dodging taxes, pulling strings, and get special treatment most people could never afford.

If he is elected, Rauner, like Walker, might support legislation to loosen the rules to help other wealthy investors and corporations avoid taxes by parking their assets abroad--leaving even less revenue for the public sector he and his rightwing billionaire friends love to bash.

Ruth Conniff is the Editor-in-Chief of The Progressive Magazine.