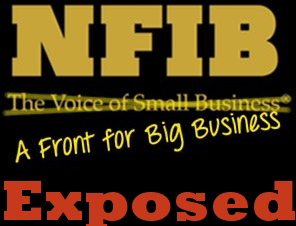 The National Federation of Independent Business (NFIB), a big business-funded group that claims to be the "nation's leading small business association," has joined the corporate board of the American Legislative Exchange Council, or "ALEC." It marks perhaps the final step towards the NFIB abandoning any pretense of being a nonpartisan representative of small business owners.

ALEC has been described as a "corporate bill mill" that allows big business interests to peddle influence with ALEC's legislative members -- who are almost entirely Republican -- and push "model" legislation that tends to benefit the corporate bottom line or advance an ideological agenda. The NFIB has long been an ALEC member, and this week joined the ALEC corporate governing board, which meets jointly with the ALEC legislative board and helps set the agenda and fundraise for the organization.

The announcement of the NFIB's board membership came the same day the New York Times revealed that the the health insurance lobby, America's Health Insurance Plans (AHIP), laundered $1.6 million through the NFIB's dark money advocacy arm in 2012 to attack Democratic Senator Mark Pryor of Arkansas. This is on top of the $850,000 that the insurance group gave to NFIB the year before.

“The largely hidden role of the for-profit health insurers highlights the increasingly confusing world of campaign finance, as nonprofit groups such as the National Federation of Independent Business and its Voice of Free Enterprise program can keep their donor lists secret and then present their carefully fashioned message, financed in large part by big business, as if it is coming from, perhaps, a more sympathetic voice.”

Even the small business owner featured in the NFIB's ad, John Parke of Little Rock, Ark., said he didn't know the message was being bankrolled by the insurance industry -- but says he should have been told.

"It is relevant to understanding who is sponsoring the message," he said.

AHIP represents dozens of insurance companies, some of which are ALEC members, such as Guarantee Trust (which chairs ALEC's Health & Human Services Task Force) and State Farm (which is also part of the ALEC corporate board).

Yet the insurance lobby donation wasn't the NFIB's biggest grant in 2012, which is the most recent year that records are available. The biggest donor to NFIB and its affiliated groups was the Koch brothers-backed Freedom Partners, an outfit that Politico described as "the Koch brothers' secret bank." Freedom Partners gave NFIB and its affiliates $2.5 million in 2012. NFIB received an additional $135,000 that year from another Koch funding outfit, the Center to Protect Patient Rights.

A Koch representative also sits on the ALEC corporate board.

A small business owner who joins the NFIB pays $195. Which means the Koch network's donations to NFIB in 2012 was the equivalent of over 13,500 individual memberships. AHIP's money amounted to more than 8,200 memberships.

Which raises the question, who does the NFIB speak for?

The NFIB's partisan and big business ties became evident in 2010, when it launched the lawsuit against the Affordable Care Act that eventually reached the U.S. Supreme Court. That year, Karl Rove's dark money outfit Crossroads GPS gave the NFIB $3.7 million. The Milwaukee-based Bradley Foundation (which also donates to ALEC) chipped-in an additional $100,000.

Prior to the healthcare lawsuit, the biggest contribution to the NFIB from an outside source was $21,000.

Read more about the NFIB at NFIBexposed.org