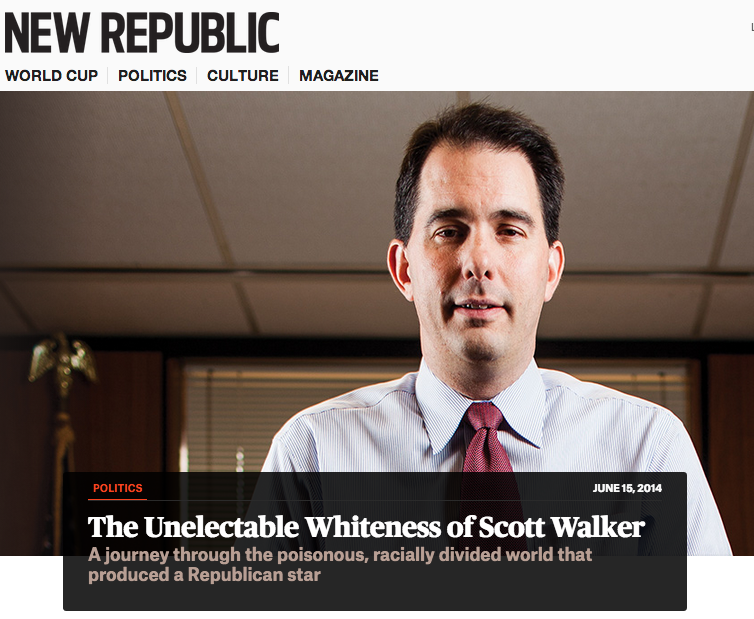 Scott Walker's political success in Wisconsin is attributable to "a toxic strain of racial politics," the New Republic argues this month in a front-page article. But Walker has long backed policies that have a disproportionate impact on people of color, particularly the harsh sentencing laws he pushed as a member of the American Legislative Exchange Council (ALEC) that have contributed to Wisconsin's worst-in-the-country record of racial disparities in incarceration.

The thesis of the New Republic piece -- which most right-wing bloggers seem to have missed -- is not that Walker necessarily has personal animus towards people of color, but that his political success is largely attributable to deep support in the overwhelmingly white suburbs surrounding Milwaukee and from the polarizing talk radio hosts that hold sway in those enclaves. This might win elections in the Dairy State, but may not be a recipe for success on a national stage, the New Republic argues.

The piece doesn't focus on Walker's record of pushing policies that have disproportionately impacted people of color. But that record exists.

Most notably, as a state legislator and ALEC member in the 1990s, Walker pushed ALEC-inspired tough-on-crime measures that experts say contributed to Wisconsin having the country's highest rate of African-American men behind bars. As governor, he has eliminated programs designed to track and remedy these disparities, and rolled-back efforts to soften harsh sentencing laws, even as sentencing reform gains bipartisan support across the country.

Nationally, the incarceration rate for African-American men is 6.7 percent, but it is nearly double in Wisconsin, at 13 percent. This rate is three percentage points higher than in Oklahoma, the state in second place. According to recent data, African-American men are only 6% of Wisconsin's overall population but 48% of the state's prison population.

These complex disparities don't have a single cause, but criminal justice experts say that tough sentencing laws passed in the late 1990s -- with Walker's backing -- have been a significant contributing factor.

"The explosion really took place in the year 2000 to 2008 where mandatory sentencing, three strikes was put in place and it more than tripled the population in just a few years, which meant about half of the black men in their 30s or early 40s in Milwaukee County would have spent time in the state's correctional facilities. And two-thirds of the men come from the six poorest zip codes in Milwaukee," University of Wisconsin Professor John Pawasarat told National Public Radio.

In 1997, then-Representative Walker introduced (and the legislature passed) the ALEC "Truth-in-Sentencing Act," which limits opportunities for parole or supervised release.

"Clearly ALEC had proposed [Truth-in-Sentencing] model legislation," Walker told American Radio Works in 2002, even though there was no mention of ALEC when the legislature was considering the bill. ALEC also promoted three strikes laws throughout the 1990s.

Walker said that he took into account the fact that CCA and other ALEC members could make money from the truth-in-sentencing bill.

"Oftentimes that's your greatest challenge, as a legislator, is trying to weed through what everybody's hidden agenda is, and figure out who's giving you credible information and in many cases playing one interest off of another to try and figure out what the truth is. More information to me is better," Walker said.

"Probably more important than just the model legislation, [ALEC] had actually put together reports and such that showed the benefits of Truth-in-Sentencing and showed the successes in other states. And those sorts of statistics were very helpful to us when we pushed it through, when we passed the final legislation," he said in the 2001 interview.

The ALEC statistics Walker relied on, though -- and that he repeated in op-eds -- were critiqued by criminologists as unreliable, and intended to persuade rather than educate. The ALEC report credited Virginia's Truth-in-Sentencing law with a five-year drop in crime, but crime dropped in all states in the 1990s, regardless of whether a state passed a tough-on-crime law like Truth-in-Sentencing.

The actual statistics following the implementation of truth-in-sentencing and other tough sentencing laws in Wisconsin have not been good.

Neighboring Minnesota has a similar crime rate to Wisconsin and similar demographics, but thanks in part to Walker's harsh sentencing law, Wisconsin has two-and-a-half times as many people in prison. Minnesota has more people on parole or in community-based corrections, and because those alternative approaches cost twenty times less than incarceration, Minnesota spends significantly less than Wisconsin on corrections.

"It Only Makes Sense" That Wisconsin Privatize Prisons

Wisconsin's prison population increased 14 percent in the seven years after the Walker-ALEC truth-in-sentencing law was implemented, with no correlative public safety benefit and no additional decline in crime rates.

But Rep. Walker, the head of the Assembly's committee on prisons, had a plan for the exploding prison populations. As Steven Elbow of the Capital Times wrote in 1999:

Rep. Scott Walker sees the future for Wisconsin's overburdened prison system, and it doesn't involve a massive building campaign by the state.

Instead, Walker, R-Wauwatosa, the chairman of the Assembly Committee on Corrections and the Courts, envisions a landscape dotted with shiny new corrections facilities, built and operated by private prison companies.

And he's introduced a pair of bills that would pave the way.

One of Walker's bills would have handed over control of state prison operations to for-profit prison companies. See the ALEC bill that would do just that, here.

The other would have allowed for-profit operators to open prisons in Wisconsin to house inmates from other states. See the ALEC bill here.

"It only makes sense that we allow a private firm to build and operate an accredited facility in our state," he said, noting that both CCA and Wackenhut Corrections (now GEO Group) wanted to expand into Wisconsin.

Although Walker's bills did not pass, some inmates were contracted-out to private prisons in other states, and CCA has registered lobbyists in the state ever since.

(Meanwhile, in 2010, after reports about CCA benefitting from Arizona's controversial anti-immigrant SB1070 law -- which was voted on by ALEC corporations and politicians before it was introduced in Arizona -- the private prison industry sought to distance itself from ALEC.)

(ALEC also has a rebranded "Justice Performance Project" task force focused on criminal justice reform, but has done nothing to acknowledge its role in spreading harsh sentencing laws and prison privatization or to promote the repeal of its old bills. Plus, some of its efforts to replace incarceration with supervised release are likely to financially benefit ALEC members like the for-profit bail bond industry and other corporate funders.)

After Walker left the Assembly in 2002 to become Milwaukee County Executive, the state legislature began rolling-back his truth-in-sentencing law.

But when Walker entered the governor's office in 2011, he reversed this progress and pushed for legislation fully restoring the ALEC truth-in-sentencing requirements, despite the costs to taxpayers associated with incarcerating more prisoners for more time (approximately $32,000 each year) and despite claiming Wisconsin was "broke."

During Walker's tenure as governor the percentage of inmates granted parole has plummeted. Walker has also not granted a single pardon.

As governor, Walker also eliminated funding for the state's first program to track and remedy Wisconsin's worst-in-the-country rate of racial disparities in the criminal justice system.

That program was aimed at tracking possible racial profiling during traffic stops, and had only taken effect in January 2011, when Walker took office. It was part of the implementation of recommendations first made in 1999 by a task force on racial profiling appointed by Republican Governor Tommy Thompson, and reiterated in 2008 by a Democrat-appointed commission.

State Bar President James C. Boll, Jr., said at the time "[t]he data collection just began this year. At best, to repeal this requirement now would signal that the Legislature has concluded, without any empirical basis, that racial profiling does not exist in Wisconsin or is not a significant problem."

Walker has also pushed other policies as governor that disproportionately impact people of color.

Soon after taking office he eliminated in-state tuition for undocumented Wisconsin students attending state universities, a policy that even Republican governors like Rick Perry in Texas and Rick Scott in Florida have championed. Walker eliminated eligibility for medical assistance and foodshare for legal immigrants in the state. He rejected Medicaid expansion under the Affordable Care Act, which would have largely benefitted people of color in Wisconsin. He pushed strict voter ID restrictions, even vowing to call a special session to restore the law after courts struck it down as discriminatory.

None of this is to say Walker himself is a bigot. But what the New Republic describes as "the insularity of his worldview" -- and the "toxic strain of politics" that gave rise to his political career -- has certainly had an impact outside of the white suburban and rural enclaves that elected him to office.

Brendan Fischer's article is one of the clearest, most informative and best written on the topic of ALEC and that organization's pursuits of incarcerating for profit. Minorities are/have been specifically targeted nationwide for incarceration - mostly due to disparate drug related legislation. Most of those incarcerated lose their right to vote permanently in many states. Those members of minorities that are able to avoid incarceration have been subsequently subjected to voter suppression legislation to reduce their numbers at the polls. The fact that ALEC is responsible for all the legislation related to increasing criminal justice pursuits, incarceration and lengthening sentences...and for drafting the voter suppression and voter ID legislation now washing over every state, is the important part of this story about Wisconsin and Walker. Without the existence of ALEC to draft, adopt and send the legislation sought by their corporate members to every statehouse, most of the terrible conservative based agenda such as Truth In Sentencing and Three Strikes, would not be possible. Nor would the current flood of legislation designed and intended to suppress the ability of minorities to vote. Again, great article and expose.
Just who qualifies as a racist? If you push policies that are designed to perpetuate injustice toward "the other" in order to both benefit your benefactors and appeal to the prejudices of those you want to vote for you Regardless of your friendships with a handful of persons of color who share your perverse vision of society You're a racist in my book. Ye shall know them by their fetid fruits.