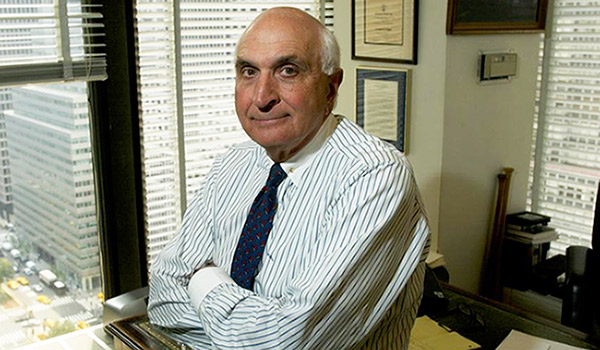 Ken Langone, the billionaire Home Depot founder, GOP donor and an ally of Charles and David Koch, clumsily defended his March 2014 comments comparing populist criticism of the 1% with the rise of Nazi Germany, in an interview with Capital New York published this week.

Langone, a regular attendee of the twice-yearly secret strategy sessions for the mega rich organized by Charles and David Koch, has been speaking publicly of his concerns for the continued success of the richest Americans.

"We're being strangled by regulation,” Langone told a conference of hedge fund managers in Las Vegas in mid May, as reported by CNN. "You're in the 1%, there's nothing wrong with that," he continued. "You can do so much more with money than pay your taxes."

The Top One Percent as Victims

Now, Langone has spoken to defend his past Nazi comparison, despite having somewhat backtracked just two months earlier.

Billionaire Kenneth Langone is still defending his comparison of income inequality talking points to rhetoric in Nazi Germany, after apologizing two months ago for the comments.

In a Capital New York interview published Monday morning, the Home Depot co-founder and Republican megadonor said it was a fair analogy to illustrate how democratic elections can yield results he finds terrifying.

“I simply said just because we’re a democracy doesn’t mean you can’t have bad results,” he said. “That’s all! I stand on what I said.”

In a March interview with Politico, which owns Capital, Langone said a GOP pivot toward the economic populism championed by progressives and by such Tea Party candidates as Kentucky Sen. Rand Paul and Texas Sen. Ted Cruz would mirror the rise of Adolf Hitler.

“I hope it’s not working,” Langone said of the political appeals at the time. “Because if you go back to 1933, with different words, this is what Hitler was saying in Germany.”

The Kochs have been building their politcal network for more than forty years.

Nicholas Confessore, wrote about the history of the Koch brothers political activities in a front page New York Times story on May 18, 2014, detailing the origins of the present day Koch political operation.

According to Confessore, in a speech given to business leaders and others in 1974, Charles Koch outlined that vision saying: “The development of a well-financed cadre of sound proponents of the free enterprise philosophy is the most critical need facing us today.”

The Koch brothers are not the only billionaires using their wealth to push for radical deregulation. They now have a whole cadre.

These people are beneath contempt.
The next step in the propaganda will probably be that the Fascists weren't really so bad, just misunderstood.
Comparing criticism of the 1% and their greed to Nazis, Langone trivializes the horror of the Holocaust and destruction caused by the Nazi's. This man has lost sight of reality living his life in luxury when the vast majority of Americans are just struggling to get by check to check. Langone and others like him deserve the criticism they get when they try to play the victim card. It's their avarice and disdain for the people around them whole helped to build their empires that emboldens me to warn this despicable human being that his kind of talk is what has caused revolutions in the past, and for the most part, those so far removed from reality of in society are the most deserving of what happened to them when revolutions occurred. Cry me some more crocodile tears, Mr. Langone