Brown v. Board at Sixty 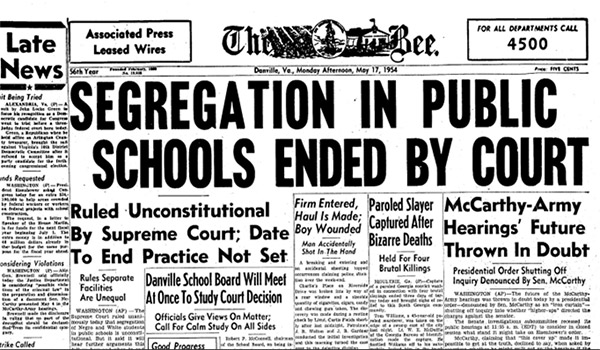 The Brown v. Board of Education decision “ignited the spark of courage among the nation’s forces fighting for equality of opportunity for all,” The Progressive editorialized at the time.

Striking down segregation in America’s public schools galvanized the civil-rights movement. But the decision itself was the result of years of struggle, hundreds of lawsuits, and savvy legal strategizing by Thurgood Marshall and the NAACP.

In the end, ordinary citizens created “a contagious courage out in the country which penetrated the solemn portals of the nation’s highest court,” The Progressive wrote.

Despite that historic decision, and the huge impact it had on the country, more than 200 school desegregation cases remain open today, and segregation, on the whole, is getting worse. Black and brown children are more racially isolated than at any time in the last four decades, the NAACP Legal Defense and Educational Fund notes.

The new threat to public education is not just resegregation, but also an insidious movement to undermine public schools and abandon the children in them, especially the historically disadvantaged.

School closings, a “test-and-punish” model of education reform that invites the takeover of high-poverty districts by private companies, and the replacement of democratically elected school boards with “CEOs” are among the threats to the democratic institution of public education.

“The corporate elite plan a wonderful, creative education system for their own children, and militaristic, stripped-down schools for other people’s children.” says Karen Lewis, the dynamic leader of the Chicago teachers’ union. “And then they have the temerity to call this system ‘the civil rights issue of our time,’ ” Lewis adds, incredulously.

Cloaking the attack on public schools in civil rights rhetoric is a devious strategy.

The rightwing American Federation for Children, for example, pours money into state elections all over the country to elect Tea Party legislators and Republican governors with the aim of busting teachers’ unions and promoting privatization schemes. In a 2012 report on its electoral successes to its membership, the group used the faces of little black and brown children to promote this new resegregation drive.

The racial politics of school privatization are agonizing.

Back in 1990 in Milwaukee, African American leaders, including Democratic state legislator Polly Williams, joined forces with Republican Governor Tommy Thompson, ALEC, and the conservative Bradley Foundation to launch the first voucher program in the nation, arguing that poor black kids deserve to get out of crumbling inner-city schools and get a better education at a private or religious academy.

It was a powerful argument.

Today, across the country, advocates for public funding for private schools continue to argue that low-income parents should have a choice, and should be able to send their kids to private school just like middle class parents.

But after twenty years, the voucher experiment has failed in Milwaukee. Results on statewide math and reading tests are worse for voucher students than for their public school peers. What’s more, vouchers breed fly-by-night operators like the Life Skills Academy, which closed without warning in mid-December, leaving sixty-six students without a school. The company kept the tax dollars that covered those kids’ tuition for the full semester, and the couple that ran it fled to Florida to open another voucher school.

The Department of Education’s office of civil rights released a comprehensive report in March that found that black and Latino students are more likely to have inexperienced, low-paid teachers, and far more likely to endure harsh discipline and to be suspended, starting in preschool.

This problem is exacerbated by failed “solutions” that undermine public schools.

Polly Williams became disillusioned with the school-choice movement when it began pushing to expand the vouchers program to all families—not just low-income, minority kids.;

“I knew from the beginning that white Republicans and rich, rightwing foundations that praised me and used me to validate their agenda would do it only as long as it suited their needs,’’ Williams told The Boston Globe back in 1998.

“Please don’t make it true that you were just using the poor to eventually make this available to the rich,” former Milwaukee public schools superintendent Howard Fuller, another African American spokesman for “school choice,” said at a budget hearing in Milwaukee three years ago.

But that’s what happened. The Wisconsin legislature lifted the income cap and expanded Milwaukee’s voucher program into nearby Racine, where most of the families who received vouchers had never sent their kids to public schools at all.

That promise is at risk. Two separate systems of education are back.

Instead of two unequal school systems, one black and one white, we now have two systems—one public and one private—but funded out of the same diminishing pool of public funds.

Dale Schultz, a Republican legislator in Wisconsin, criticized his colleagues’ plans to siphon tax dollars into private schools, even as they slash funds for public education.

“How conservative is that?” Schultz said recently. “We are trying to duplicate something we already can’t afford.”

Schultz objects to the generally sour tone toward teachers, and what he calls the “loose talk” that our public schools are “failing.”

“Failing schools, hell,” he said at a public forum. “Would you like to take me and show me in my district where the failing schools are?”

The corporate school-choice lobbyists who patrol the halls of the state capitol, along with their allies at rightwing think tanks, offend Schultz, and he denounced them, and his colleagues who do their bidding, as he retired this year.

Today’s school segregation battle is as daunting as the battle that led up to Brown sixty years ago.

But the courage of activists who are determined to save their public schools all over the country is just as contagious.

In New York and Chicago and northern Wisconsin, parents, grandparents, and community members are waking up to the fact that their school—the beating heart of their neighborhood, their town, their civic life—is threatened by corporate lobbyists pushing vouchers and private charters and a competitive business model that spells doom for this great, democratic institution.

Activists from Seattle to Newark, from New Orleans to Milwaukee, and many other communities in between came together in Austin, Texas, in February at the first-ever gathering of the Network for Public Education to compare notes on their battles to save their local schools from privatization, over-testing, and closure.

Challenging the competitive “winners and losers” business model that is supplanting the great civic commitment to public education, Texas school superintendent John Kuhn put it this way: “Their weakness is not my strength, their poverty is not my wealth, and their pain is not my comfort. Their strength is my strength. Their richness is my richness. Their well-being is my well-being. We are in this together. And public schools are for all of us.”

Karen Lewis joined Kuhn on stage at an event organized by The Progressive on May 1 to give a barn-burning joint speech at a rally to defend public schools.

“There could not be two more different people on the planet,” Lewis said. “John Kuhn is a white male. I am a black woman. John Kuhn has worked as a Christian missionary, and I am a recently bat mitzvahed Jew. John Kuhn is management. Karen Lewis is labor. But I am going to tell you that what we have in common are the values [that] make this country great.”

Those values, Kuhn said, are why the Chicago teachers went out on strike, not for themselves, nor even for their students, but “to keep the fading light of democracy burning, and to fend off a new generation of robber barons.”

Jitu Brown, a neighborhood organizer and activist on the South Side of Chicago, describes the passionate community commitment to the struggle to save neighborhood schools, including one family sitting in at a Chicago school building slated for closure, even when the police came and sat on top of them.

“A movement is built by people who feel like that,” Brown said.

This movement is for all of us—people of every race, town, and rural route.

As Brown put it: “When your baby or grandbaby goes out the door with that bookbag on, and you kiss that baby—at that moment, we’re all the same.”

Ruth Conniff is editor-in-chief of The Progressive Magazine