Opposition to KXL Marches On

by Dave Saldana and Mary Bottari 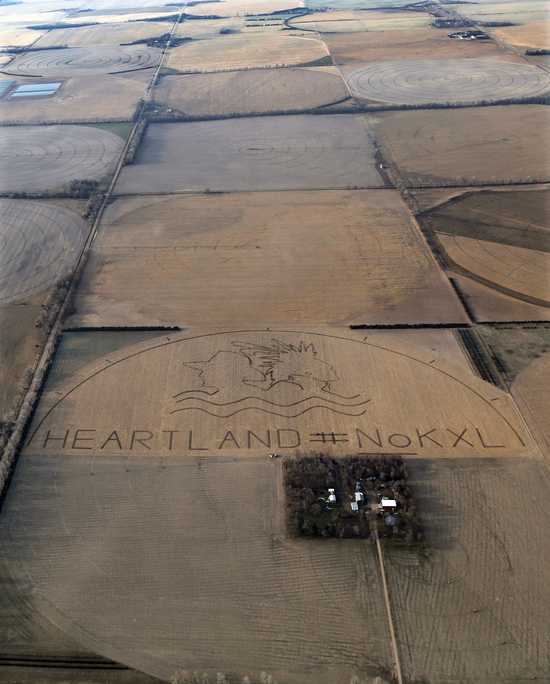 On Friday, the Obama administration let it be known that it was punting a decision on Keystone XL pipeline until after the midterm elections in November, a surprising and disappointing decision to many.

The State Department's decision "shows the problems with the proposed Keystone XL tar sands pipeline continue to grow," stated Jim Murphy, senior counsel of the National Wildlife Federation. Bill McKibben of 350.org said in a statement: “It’s as if our leaders simply don’t understand that climate change is happening in real time — that it would require strong, fast action to do anything about it.” The administration is also postponing the deadline for public comment after receiving an unprecedented number of comments.

But the opposition to the pipeline is not taking a vacation.

Now, Reject and Protect, a large and symbolically important coalition of farmers, ranchers, and Native Americans, is set to occupy an encampment near the White House beginning on Earth Day, April 22, and extending through April 26. On the last day, the group, which calls itself the Cowboy and Indian Alliance, will be joined by KXL opponents from all over the country to show Obama that “the power of the alliances that have turned Keystone XL into a turning point for our movements, and for our future.”

The group’s call to action conveys a striking level of commitment.

Our actions next [week] will show President Obama that we are living up to his call to “be the change we wish to see,” and that we stand with him to say no to Big Oil. Together we will make a clear promise that if President Obama goes back on his word and approves the Keystone XL pipeline, he will be met with the fiercest resistance from our Alliance and our allies from all walks of life. Bryan Brewer, President of the Oglala Sioux, speaks for us when he says, “We are ready to fight the pipeline, and our horses are ready.”

This latest action builds on the momentum laid down on March 2, when about 400 people, mostly college students, were arrested after chaining themselves to the White House fence as part of a nationwide event called #XLDissent. Then, on March 7, after an unusually short 30-day public comment period, more than 2 million letters in opposition to KXL were delivered to Secretary of State John Kerry’s front steps.

Big Oil’s cheerleaders in the media blithely dismiss grassroots activists at the vanguard of KXL opposition as “environmental extremists,” as if wanting uncontaminated water and non-toxic air is an extreme position. But they have deep support on many levels, from the highest echelons of business, economics, and civil society.

A rejection would signal a new course for the world’s largest economy. You know as well as we do the powerful precedent that this would set. This leadership by example would usher in a new era where climate change and pollution is given the urgent attention and focus it deserves in a world where the climate crisis is already a daily struggle for so many.

Canada’s Prime Minister’s Office “scolded” Carter about the letter, hearkening back to the oil shortage of 1979. Stephen Harper’s government has spent more than $30 million of taxpayers’ money to (fail to) persuade the Canadian people to love Big Oil as much as he does, so of course it encouraged Carter to be more like George W. Bush, who said KXL was “a no-brainer.”

Harper’s office had no such snark for Archbishop Desmond Tutu, who signed the Laureates’ letter, and also called for a global divestment from fossil fuels, in addition to conservation and alternative energy investment. “People of conscience need to break their ties with corporations financing the injustice of climate change,” wrote Tutu. “It makes no sense to invest in companies that undermine our future.”

Similar sentiments were expressed in letters from scientists and economists, environmental entrepreneurs, and Silicon Valley elites over the past few years.

A somewhat different tack was taken by National Nurses United, the largest union of registered nurses in the United States, who pointed to the public health problems posed by Keystone and global warming.

These nurses’ concern is shared by Sens. Barbara Boxer (D-Calif.) and Sheldon Whitehouse (D-R.I.), who pressed the Obama administration to conduct a thorough study on potential health impacts of Keystone XL. “Significantly higher levels of dangerous air pollutants and carcinogens have been documented downwind from tar sands refineries, and in these areas people are suffering higher rates of the types of cancers linked to these toxic chemicals, including leukemia and non-Hodgkin’s lymphoma,” Boxer said.

Now the challenge is for those who care more about the environment than corporate profits to turn Keystone into a critical issue in the midterm elections to prove to the President that opposition to Keystone is a winning issue.

A week’s worth of actions against the Keystone XL tar sands pipeline are planned in Washington, DC and in local communities from April 22-27, 2014. If you can only make one event during the week, say organizers, the most important day is Saturday the 26th, when thousands will be gathering at the Cowboy and Indian Alliance Camp for a tipi presentation ceremony and procession. See schedule of events here.