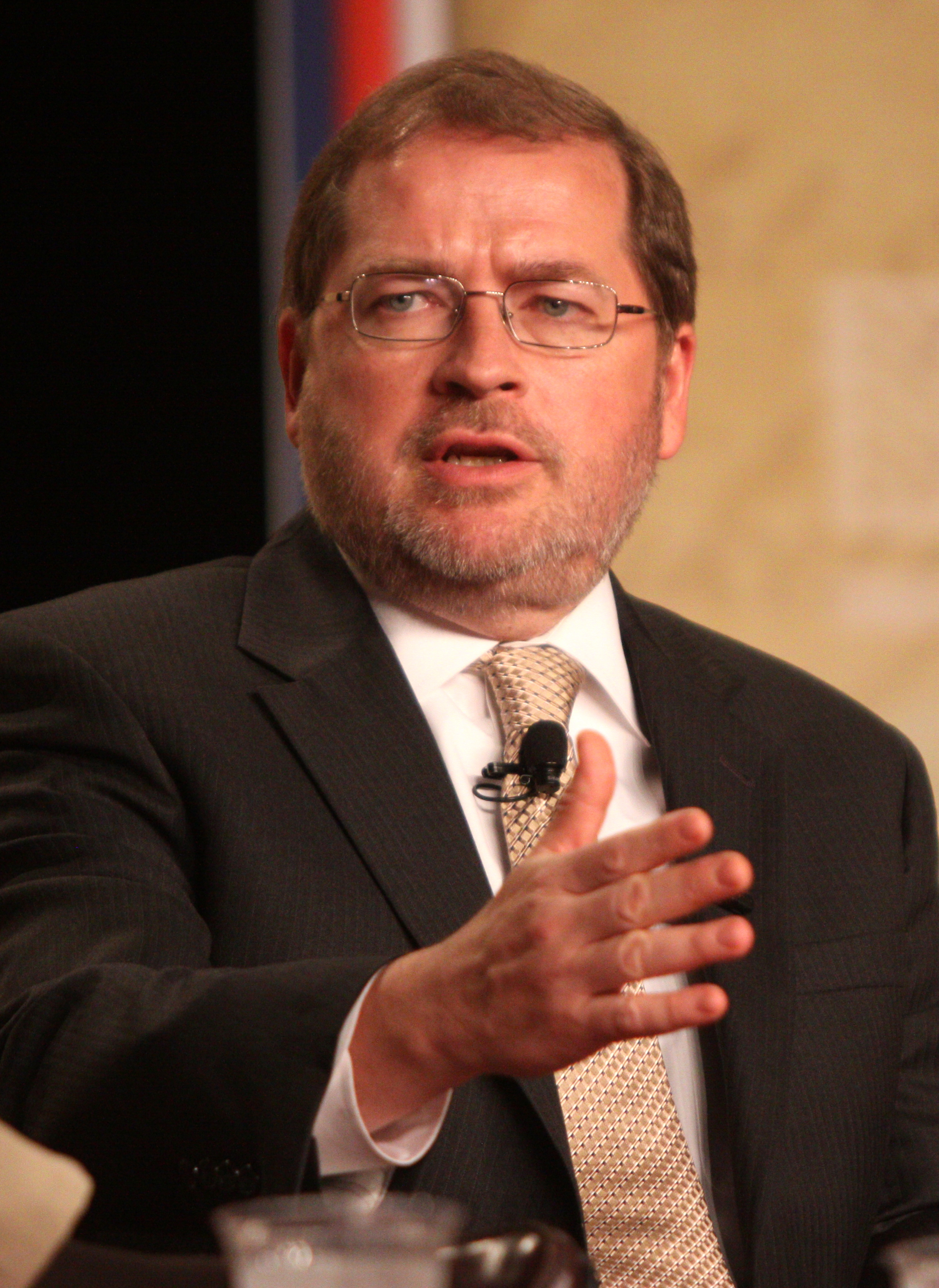 Last week, the Missouri House of Representatives passed a measure to put an anti-union "paycheck protection" measure on the ballot in August which, if approved by voters, will make it harder for unions to raise funds and engage in the political process. "Right to work" could be next -- and both measures are being pushed by an array of out-of-state right-wing interests.

The paycheck protection measure is very similar to several American Legislative Exchange Council (ALEC) model bills that attempt to make it harder for unions to raise funds, such as the "Paycheck Protection Act," "Voluntary Contributions Act," and "Political Funding Reform Act."Despite bipartisan opposition, the bill passed the House 83-69 and now moves to the Senate. It could be up for consideration as early as this week.

At the same time, the Speaker of the Missouri House, ALEC member Tim Jones, has made it clear he also plans on pushing ALEC's so-called "Right to Work" measure through the legislature and onto the August ballot, which would starve unions by letting some workers free ride on the benefits of union representation (such as higher wages and better working conditions), yet not pay for the representation.

Two days before "Paycheck Protection" passed the Missouri House and before Speaker Jones made it publicly evident that the House would also be considering "Right to Work" in the following days, right-wing anti-tax advocate Grover Norquist tweeted that the Missouri House would vote on and pass Right to Work, as if he had a crystal ball -- or more likely -- a hotline to the Speaker. 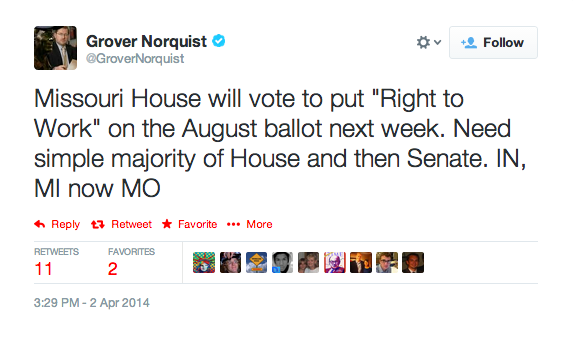 Just a few months ago, Grover Norquist's Americans for Tax Reform (acting under the absurd name "Center for Worker Freedom") was the leading group trying to stop workers at Volkswagen plant in Chattanooga, Tennessee from forming a union. For example, Norquist's group put up billboards making the false claim that the bankruptcy in Detroit and the loss of jobs in the automobile sector was entirely the UAW's fault. The National Labor Relations Board is currently investigating the outside influence at the Chattanooga plant, which eventually voted against unionization.

Norquist has now taken his union-busting show on the road, shifting resources to attack unions in Missouri. Norquist's Americans for Tax Reform recently sent letters to all members of the Missouri House asking them to support a "Right to Work" measure. The letter ends with a warning to legislators: "Americans for Tax Reform will be educating your constituents as to how their representatives in the Senate vote on this important matter."

Americans for Tax Reform has long been an ALEC member group. By attacking the rights of organized workers and unions, Norquist is not only attempting to strangle one of the most powerful forces countering the low-wage, low-road ALEC agenda, but he is currying favor with the corporate CEO and ideological funding sources that Americans for Tax Reform and ALEC rely upon. And Norquist has apparently called in the troops. A panoply of DC-based right-wing special interest groups are starting to put resources into Missouri -- piling on in an attempt to push the union-busting bills through the legislature.

The Kochs, FreedomWorks, and More Pile on in Missouri

The Missouri chapter of the Koch brothers' Americans for Prosperity has launched an online petition urging legislators to pass "right to work" legislation. Previously, AFP organized small events to demonstrate "grassroots" support for the efforts to pass union-busting measures in Wisconsin and Michigan. In March, AFP-MO tweeted that last week's "paycheck protection" bill was the first step in getting a "right to work" bill in Missouri. Additionally, Progress Missouri documented that Americans for Prosperity held a strategy meeting in the Missouri capitol with "like-minded ideologues and interest groups in Michigan," which passed a similar "Right to Work" bill in December 2012. (This is in addition to the session at ALEC's 2013 Annual Meeting, hosted by the State Policy Network, titled "You Can Too!" highlighting Michigan's success in passing right to work.) It is unclear yet if AFP will hold training sessions, astroturf rallies, or even release TV ads touting the anti-union measures in Missouri like they have in other states.

The American Conservative Union announced the organization would be sending letters to Missouri legislators urging them to vote in favor of a "Right to Work" proposal. Self described as "the nation's oldest conservative lobbying organization," the organization is known for spending millions to push the right-wing agenda through various political action committees and nonprofit entities, along with hosting the annual CPAC convention. The ultra conservative Americans for Limited Government also issued a press release urging Missouri legislators to support "right to work" legislation.

Other outside right-wing special interest groups throwing their hat in the Missouri "right to work" fight include FreedomWorks, which is launching an organizing effort to target legislators who are on the fence over the "right to work" measure. FreedomWorks is asking its 6 million online members nationally to barrage a small set of Missouri legislators who are on the fence about the "right to work" measure. FreedomWorks came out of the Kochs' Citizens for A Sound Economy (as did Americans for Prosperity) and has been a key player in organizing the Tea Party movement.

Outside Influences Mean Outside Money in Missouri

Not surprisingly, these outside groups attempting to hijack the Missouri legislative agenda are almost entirely funded by out-of-state sources. Common funders between ALEC, Americans for Tax Reform, the National Right to Work Committee, and the American Conservative Union include the Koch Family Foundations, the Wisconsin-based Bradley Foundation, and the Koch-linked Donors Trust and Donors Capital Fund. FreedomWorks has also received significant funding from the Donors groups and the Bradley Foundation. In addition to funding from the Donors groups, Americans for Limited Government has received over $7 million since 2010 from the Center to Protect Patient Rights, a secretive nonprofit aimed at repealing the Affordable Care Act that is largely funded by the Kochs' Freedom Partners.

Just a few months ago, when new tax documents were published, it came to light that the Kochs' new political advocacy group, Freedom Partners, had funneled $1,000,000 to the National Right to Work Committee. Freedom Partners also gave $32.3 million to Americans for Prosperity in 2012.

Additionally, Americans for Tax Reform, the National Right to Work Foundation, and ALEC have all received significant funding from the Walton Family Foundation, of Walmart.

With Outside Pressure, Missouri Legislature Expected to Take Up Anti-Worker Measures This Week

Both the "Paycheck Protection" and "Right to Work" bills must pass the legislature by a simple majority before they can be placed on the August primary ballot. This legislative tactic would bypass Democratic Governor Jay Nixon, who does not support the anti-worker measures and would likely veto them. Both measures are likely to see action early this week.

These right-wing ideologues and corporate special interest groups are essentially trying to hijack a state's legislative agenda in order to cripple unions, who are the largest effective counterforce to ALEC's agenda to undercut wages for working families, make it harder to get health care, and make it more difficult to vote. These groups succeeded in eroding workers rights in Michigan and Wisconsin; it has yet to be seen if they can succeed in the "Show Me" state, where state Democrats are preparing for a fight.

Mind your OWN BUSINESS...!!
It is always labor that is made to walk the tight rope. Why isn't it just as difficult for corporations to donate (bribe) to politicians? Corporations take profits from the shareholders. Why isn't that illegal?