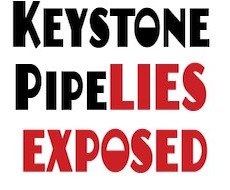 Americans revere few things as highly as the veteran. They deservedly get respect for having worn their nation's uniform in military service, many suffering mental and physical scars from their time in combat. To cheapen that service and sacrifice for private gain is considered the height of disgrace.

But that, apparently, is exactly what Big Oil is doing to push its Keystone XL agenda.

On Capitol Hill last week, several members of Congress, the Canadian ambassador, executives from TransCanada and the American Petroleum Institute (API), and a group of veterans held a press conference pushing KXL as the answer to Russian aggression in Crimea, a means to bolster U.S. energy independence, and solve any number of international crises. (The last part is only a minor exaggeration. As Omaha World-Herald Washington bureau chief Joseph Morton noted, "Previously, pipeline supporters have tied the project to subjects including the conflict in Syria and the disclosures of classified material by Edward Snowden.")

It's no surprise that API and TransCanada are trying to whip up a frenzy about KXL as a panacea for American international diplomacy. They've spent millions of dollars on lobbying and have a wide-ranging, self-serving agenda for national energy policy. Likewise, their congressional cohort, Sens. John Hoeven, (R-N.D.), and Joe Manchin, (D-W.Va.), and Rep. Lee Terry, (R-Neb.), are pet politicians of Big Oil, collecting some $293,237, $259,150, and $334,645, respectively in campaign and PAC contributions from the oil and energy industry during their careers. And since Canadian Prime Minister Stephen Harper -- who cut his political teeth in Canada's oil country, Alberta -- is widely considered something of a sugar daddy to tar sands oil companies, the ambassador's presence is to be expected.

But what's the deal with the veterans group?

Rear Admiral Don Loren, of the group Vets4 Energy, spoke at the press conference, claiming the pipeline was key to projecting American strength and fostering a robust economy, according to the Omaha Herald. "All the world's eyes are watching this decision," he said. "They want to know whether we will move forward."

How America projects strength by turning its agricultural heartland into a toxic spillway to send dirty Canadian oil to foreign consumers is a question that apparently nobody asked. But they did ask where Vets4Energy gets its money. Loren acknowledged that his group gets funding from the API, but said it represents an "independent voice from veterans who believe in the issue."

But Loren seems to be soft-pedaling the facts; Vets4Energy appears to be little more than a manufactured frontgroup for API.

An API press release from 2013 states that the group is a project of API "American Petroleum Institute's Vets4Energy campaign." The group's chairman (according to the Anchorage Daily Planet; V4E's website does not identify the organization's leadership) is a former mayor of Anchorage who also happens to be former vice president of Alyeska Pipeline Service Company, an API member. The video to the right shows API's CEO and president Jack Gerard giving a pep talk at a pre-lobbying meeting for high-ranking veterans, telling them to "Stand their Ground." 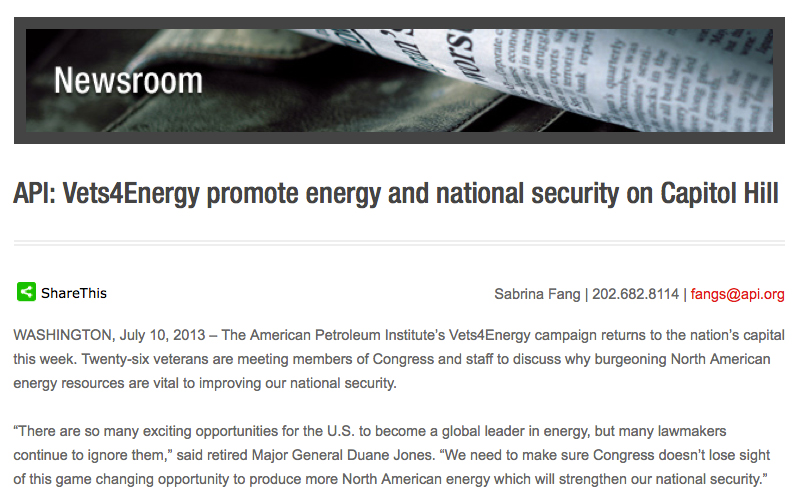 But you would not know this from looking at the group's website. Vets4Energy describes itself as a "group of volunteer veterans who continue to serve America as advocates for energy policies to sustain our national security." But there's little evidence of rank-and-file veterans' membership. The organization's public face, in op-eds, public appearances and such, routinely consists of a small handful of senior officers, some who trade the cachet of their rank into cushy advisory gigs upon retiring, sometimes for companies they dealt with in the military.

One hesitates to call a retired officer and former Deputy Assistant Secretary of Defense Homeland Security Integration (even if he does appear to be trading on his military and homeland security service in an advisory gig with an international security consulting firm) a shill, but if a multimillion-dollar corporate lobbying group bankrolls the organization as a "campaign," and organizes pep rallies for its "grassroots" lobbying, its "independence" is suspect at best.

Whoever winds up viewing this comment, ask yourselves, since the end of WWII, what have veterans through their service & membership in the US armed forces actually done for this country? - how did they protect it? Answer: not very much. Ask yourselves the obverse of this question and it would take weeks & reams of paper to answer. --Reason for their existence?-- Police the world for fun and profit for the Capitalist class.
You are right on the police point, although the Korean and Vietnam wars were, to some extent, necessary for the good of the world and the nation. The thing is that should the need ever arise again, such as 1941, we want our troops ready and knowing that we have their backs. It's a shitty life in a lo of way and hey earn their keep.