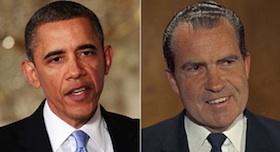 Rep. Dave Camp (R- MI) and Sen. Max Baucus (D-MT) have introduced "Fast Track" legislation in Congress. It's been 15 years since a U.S. president sought Fast Track authority, which strips Congress of its Constitutional authority to have a meaningful role in U.S. trade policy. If the Fast Track bill passes, the Trans-Pacific Partnership (TPP), a trade deal involving 11 Pacific Rim countries could be completed and signed before it is sent to Congress for a vote. Then the far-reaching trade deal will be railroaded through with no amendments and only 20 hours of debate.

The original Fast Track was cooked up by Nixon, served up again by Clinton to pass the NAFTA and WTO agreements, and stirred up again in 2000 to jam China free trade through Congress. That all worked out well, didn't it? The United States lost 5.7 million manufacturing jobs in the NAFTA/WTO era, and our trade deficit with China is now one of the largest in history.

Today, President Obama is seeking Fast Track to get the TPP and the 27-nation Transatlantic Trade and Investment Partnership (TTIP) through Congress. His road is a rocky one. His trade team could not convince a single Democrat to author the bill in the House, and with hundreds of groups across the political spectrum -- from progressive environmental and consumer groups to various Tea Party patriots -- lined up against it, it's possible Fast Track can be defeated.

"When Will We Start to Measure the Results?"

The long, controversial history of fast tracked trade agreements hardly came up in the first Senate hearing on the Baucus-Camp bill on January 16.

Chairman Baucus, the only Democrat to author the legislation in either house, rambled on about the fact that 95 percent of the world's consumers live outside the United States. According to Baucus, we need more trade deals to reach those consumers. But he forgot to mention that the United States is already part of the WTO trade pacts on goods and services encompassing some 159 member countries, so our products already have privileged access around the globe.

This line of argument was also supported by the ever-present Honeywell CEO David Cote, last seen pushing Social Security and Medicare cuts on behalf of the Business Roundtable and the "Fix the Debt" gang. Cote dubbed Fast Track "a key enabler for trade agreements," invoking the wrong kind of chuckle.

Larry Cohen, President of the Communication Workers of America, injected a refreshing dose of reality to the proceedings. Cutting through blather about "leveling the playing field," Cohen looked Baucus in the eye and demanded answers to a few pointed questions.

When, asked Cohen, will we start to document the net effect of these trade deals on employment? "What has happened to our jobs, our communities, the North Philadelphia that I grew up in? The Cleveland that I can picture now? The devastation throughout those communities, no replacement for those jobs," said Cohen. The Economic Policy Institute estimates that between 1998 and 2012, the United States lost one third of its manufacturing base largely due to growing U.S. trade deficits.

When, asked Cohen, will we document the effect of trade on pay and standards of living? "I can tell you story after story where CEOs say to me -- it's gravity, we have to move the jobs or you have to cut the pay," says Cohen. When U.S. workers are put in competition with workers like those in Vietnam making 28 cents an hour, U.S. wages have no where to go but down. Cohen pointed out that average weekly take home pay for an American worker today is $637 compared to $731 40 years ago.

The Senators shifted uncomfortably in their seats, but had no answers for the CWA chief, who pushed to bring thousands of call center jobs back to the United States. Telecom firms, however, demanded that the salaries "be competitive" with those of overseas workers.

Congress Is Targeting the Wrong Deficit

Just days before, Senate Republicans shot down unemployment benefits for 1.3 million Americans, because, to the Republican caucus, nothing matters more than the United States federal account deficit.

But many economists say Washington has the calculus backwards -- they are targeting the wrong deficit. As Dean Baker and Jared Bernstein explain in the New York Times, Washington's obsession with lowering the budget deficit by slashing spending and supports for the economy will only lead to slower growth, whereas "reducing the trade deficit would have the opposite effect. Not only that, but by increasing growth and getting more people back to work in higher-than-average value-added jobs, a lower trade deficit would itself help to reduce the budget deficit." EPI projects that reducing the trade deficit could generate a "manufacturing-based recovery" for the United States.

The two trade agreements in the works right now, the TPP and the TTIP, will only add to our job-killing trade deficit.

Senator Sherrod Brown (D-OH) turned the conversation at the Fast Track hearing in a completely new direction by asking David Cote if he thought trade agreements should be used to attack consumer and environmental laws democratically enacted around the globe. Brown referenced the so-called "investor-state" provisions that have been included in U.S. trade agreements that allow corporations to directly sue governments for cash damages outside of domestic court systems and in friendly trade tribunals if they believe consumer, health, or environmental regulations harm their products.

Brown pointed to a new case in Australia, where U.S. firm Phillip Morris is suing Australia over a new plain packaging rule for cigarettes designed to reduce cigarette smoking among teens and other new users. Phillip Morris battled the rule in Australian courts and lost, so is taking it to a corporate-friendly trade tribunal. The rulings of these tribunals are binding, and there is no appeal.

Cote, who is no doubt perfectly aware of the perverse system and its history of successful attacks on a range of public interest laws (detailed by Public Citizen here), used the "I am not a lawyer" dodge.

The list of these investor attacks is growing. U.S. pharmaceutical firm Eli Lilly is attacking Canada's system for approving generic drugs under NAFTA, and a U.S. fracking firm is attacking Quebec's moratorium on fracking as a "trade barrier."

The range of public interest policies implicated in the trade agreements is enormous. TPP "includes chapters on patents, copyright, financial regulation, energy policy, procurement, food safety and more -- it would constrain the policies on these matters that Congress and state legislatures could maintain or establish," says Public Citizen.

As if that wasn't enough, the TPP's draft environment chapter, published by Wikileaks last week, would undermine protections for oceans, forests, and wildlife. "If the environment chapter is finalized as written in this leaked document, President Obama's environmental trade record would be worse that George W. Bush's," said Michael Brune, executive director of the Sierra Club.

This is Wikileaks' first foray into trade, but it makes consummate sense. Not only are the agreements being negotiated behind closed doors with classified input from 600 U.S. corporate advisors, but the issues on the table include internet freedom and access to medicines around the globe.

The draft intellectual property chapter obtained by Wikileaks "would trample over individual rights and free expression, as well as ride roughshod over the intellectual and creative commons," says Julian Assange. "If you read, write, publish, think, listen, dance, sing or invent; if you farm or consume food; if you're ill now or might one day be ill, the TPP has you in its crosshairs," he told Politico. The U.S. government's pro-PhRMA position "will severely restrict access to affordable medicines for millions of people," says Doctors Without Borders.

Another World Is Possible

The last time the United States used Fast Track to pass a trade agreement, it was with South Korea. Senator Baucus and crew trotted out all the same talking points about how our exports would boom. But it was our trade deficit that boomed, increasing by $5.5 billion or 46 percent since 2012.

With the U.S. recovery staggering and with the wide range of issues caught up in the trade negotiation, it is no wonder that a coalition of those opposing free trade agreements is growing more diverse and powerful every day.

Fast Track will not pass without a sustained effort by the President himself. Yet, when his top trade representative did not bother to show up at the Senate hearing last week, Obama left everyone wondering if he had the appetite for the fight or if another world was possible.

You can send a message to your member of Congress about Fast Track trade by clicking here.

I agree with the article in general, but there are some errors. "It’s been 15 years since a U.S. president sought Fast Track authority" Bush sought it in 2002. "and stirred up again in 2000 to jam China free trade through Congress." Fast Track was not in place to bring China into the WTO, assuming that's what the author meant by China free trade.
This controlling agreement is the next step in the push for global domination of all of us by the giant corporations - if we don't stop big-Pharma/ big-Ag at this point we are doomed - the one-state police will eventually have access to everyone's whereabouts and BIG Brother will have arrived ! THEY (the giant corporations, controlled by their money-hungry stockholders who have zero interest in the little guy, are taking complete control slowly but surely - WAKE UP PEOPLE !!!