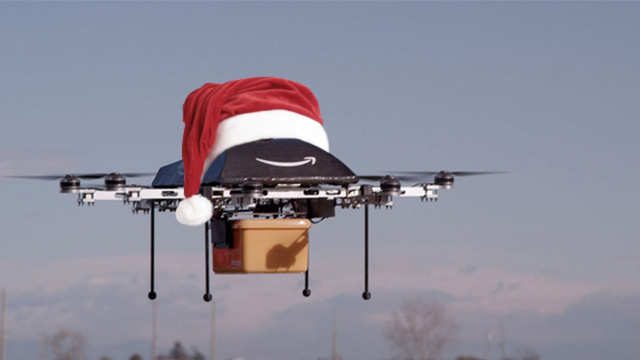 Amazon.com founder Jeff Bezos' recent purchase of the Washington Post has brought him and his giant retail and technology corporation increased attention in recent months. But his latest initiative promoting the use of commercial unmanned aerial vehicles, commonly referred to as drones, to deliver his company's products has drawn scrutiny and criticism from numerous parties. One of the main questions everyone is asking is how commercial drones will affect Americans' privacy rights.

In an online announcement, Amazon released some details of its "Prime Air" program which will use small drones to deliver packages within 30 minutes of an order. Bezos stated in an interview with 60 Minutes that Amazon was now focusing on getting approval for the project from the Federal Aviation Administration. He hopes to have approval from the FAA "as early as sometime in 2015."

This announcement instantly drew the attention of lawmakers on both sides of the aisle who worry that a fleet of drones flying across America's skies could violate privacy rights, become a public safety hazard and jeopardize national security. Rep. Ted Poe (R-TX) introduced a bill designed to safeguard privacy rights from commercial drones, the Preserving American Privacy Act of 2013, warning that "companies could use drones for information gathering whether that is taking a photograph of your patio furniture or recording the make and model of your car."

Other skeptics are also worried about the drones' spying and data collection abilities. The Center for Democracy and Technology has called for any commercial drones regulation promulgated by the FAA to mandate that each drone constantly transmit radio signals regarding their identification, location, altitude and velocity. Jennifer Lynch of the Electronic Frontier Foundation argued that "when it comes to drones, the FAA needs to examine privacy issues with the same rigor it applies to flight and mechanical safety...Just as vague safety regulations for drones could result in damage to life or property, vague privacy measures could harm civil liberties."

Too Soon to Worry?

However many doubters argue that all the handwringing over commercial drones is entirely premature. The FAA projects that it may not be able to complete all the rules and procedures needed to allow commercial drones until 2026. Wired's Marcus Wohlsen wrote that "the truth is that no one who buys discounted merchandise on Amazon today will have it delivered by drone, and such deliveries won't happen for years -- if they happen at all." David Horsey of the LA Times argued that the limited technical capabilities of commercial drones makes legislation like the bills championed by Poe and Markey unnecessary. "Though, as Bezos said, 90% of Amazon packages are under the 5-pound carrying capacity of the drones, there are far fewer than 90% of customers who live within the drones' maximum 10-mile range," making the use of delivery drones economically impractical for the foreseeable future.

Regardless of the timeline, the use of commercial drones by Amazon should raise serious concerns given the company's history of privacy rights violations. Amazon was sued by a group of Internet Explorer users in U.S. District Court for the Western District of Washington for allegedly using deceptive practices in order to circumvent the browser's privacy features. The plaintiffs charge that Amazon sent "gibberish" instead of readable code to Internet Explorer in order to confuse the browser's privacy features and allow tracking of user activity. In June, 2012, Judge Robert S. Lasnik rejected Amazon's motion to dismiss, allowing the case to proceed on whether or not Amazon violated a Washington state law forbidding unfair and deceptive acts.

Over the past few years, Amazon has greatly increased their lobbying efforts in the European Union. One of their primary lobbying goals has been to dilute privacy protections. The company has experienced great success, as they have convinced EU parliamentarians to include the proposals of their lobbying documents word-for-word in amendments to privacy laws. One Amazon lobbying position would remove the requirement for cloud-storage providers to remove the stored data about users who wanted to be digitally "forgotten." Amazon has refused to disclose any information to the EU's optional lobbying register. Therefore, the full extent of Amazon's EU lobbying efforts is unknown.

Amazon also faced widespread criticism over its integration with the Ubuntu Linux operating system. The operating system features a search feature called "Dash" which allows a user to search for a file or program within their computer. However, Ubuntu will also send the search terms to Amazon and presents the user with Amazon shopping results under the "more suggestions" section after the general results. Ubuntu faced numerous complaints of privacy violations for the unexpectedly sharing user search data with Amazon. Among the critics was the Electronic Frontier Foundation's Web developer Micah Lee, who stated "It's a major privacy problem if you can't find things on your own computer without broadcasting what you're looking for to the world. There are many reasons why you wouldn't want any of these search queries to leave your computer."

Amazon's fleet of delivery drones may not be a reality for years to come. But if they are inevitable, as argued by the Washington Post's Dominic Basulto, it is not too early to enact privacy protections. This is especially true when the major force driving the technology is a company with a history of hostility towards consumer privacy such as Amazon.