More Trouble for Bulletproof Securities in Wisconsin: Did It Break the Law Again? | PR Watch

More Trouble for Bulletproof Securities in Wisconsin: Did It Break the Law Again?

Bulletproof Securities, the Arizona private security firm that was operating without a license in northern Wisconsin to protect a controversial mine owned by Gogebic Taconite, may have broken the law by misleading regulators when it finally got around to applying for its license.

Bulletproof's president, Tom Parrella, wrote a letter on July 18, 2013, to Marlene Meyer of Wisconsin's Department of Safety and Professional Services (DSPS). He presented Meyer with a timeline, explaining how Bulletproof wove its way to Iron County, WI.

Open records requests and follow-up interviews with state and local officials listed in Parrella's July 18 letter poke holes in Bullerproof's narrative of how it worked its way up to northern Wisconsin. Specifically, Parrella claimed in his letter to have reached out to local officials in two counties and to the Wisconsin Department of Natural Resources (DNR) before he sent his employees to northern Wisconsin. But officials with those counties and the DNR deny this.

If Parrella was not telling the truth in his letter, Bulletproof may have violated Wisconsin Statute 440.26(6)(a)(3) -- making a "false statement in connection with any application for a license or permit" -- on top of the violation it had already committed by operating in the state without a license to begin with.

Bringing Bulletproof's heavily armed guards into the north woods of Wisconsin was highly controversial from the start.

Photos of three guards in masks and camouflage carrying semi-automatic rifles made a splash in local news and went viral on the Internet, stoking a heated debate over the proposed Gogebic Taconite mine. Wisconsin Governor Scott Walker pushed controversial legislation that fast-tracked the mine by weakening environmental regulations and superseding local government control. The armed guards personified local citizens' sense that outside forces were seizing control of the land in Wisconsin where the GTac mine would go. 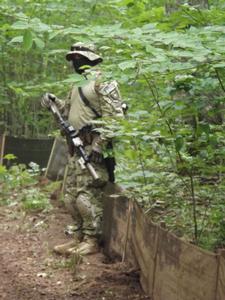 "We are calling on you to immediately remove the heavily armed masked commando security forces currently hired to protect your company's property in the Penokee Hills," wrote Wisconsin state senator Bob Jauch (D) and Rep. Janet Bewley (D) in a July 8 letter. "The images are horrifying. ... These kinds of security forces are common in Third World countries but they don't belong in Northern Wisconsin."

Governor Walker said Bulletproof was needed near the proposed iron ore mining site due to anti-mining activists' antics on the same piece of land.

"These extremists -- who are disrupting work and causing harm to law-abiding employees -- should be prosecuted to the fullest extent of the law," Walker said in a press release.

But the question remains, was Bulletproof following the law?

When applying for a private security permit, every applicant needs to sign an affidavit saying: "I understand that...making any materially false statement and/or giving any materially false information in connection with my application for a credential or for renewal or reinstatement of a credential may result in credential application processing delays; denial, revocation, suspension or limitation of my credential; or any combination thereof; or such other penalties as may be provided by law," according to the Department of Safety and Professional Services.

"It is our understanding that the operations of 'Bulletproof Securities' and its employees holding themselves out as 'private security' personnel hired through Gogebic Taconite occurred solely and without question within the boundaries of Iron County," Lieutenant Michael Malmberg wrote in a letter in response to the request.

"Further, we have had no communication or other contact -- written, telephonic, in person, or other -- with Bulletproof Securities or any of its employees."

In a follow-up interview, Malmberg said the first time he heard about Bulletproof being in the area was on the local news.

"The first information we received about Bulletproof being up there was from public sources, not by Gogebic Taconite or Bulletproof Securities," said Malmberg. "It's speculative as to why they'd [write what they did in the July 18 letter] without ever contacting us, especially since they were never in Ashland County."

Another Public Records Law request filed with the Ashland County Forestry and Recreation Office pointed to more of the same: no known contact with Parrella or Bulletproof Securities.

"Ashland County have had no communications, written or electronic, pertaining to or discussing the operations of Bulletproof Securities and therefore have no records to supply you with," wrote Beirl on August 20.

"I have never had any correspondence with Bulletproof Securities nor have I ever been involved in any discussion nor correspondence regarding Bulletproof Securities," wrote Tara Krall -- Office Manager for Iron County's Forestry and Parks Department -- in response to a Public Records Law request. "Their business did not involve the Iron County Forest nor the Iron County Forestry Department in any way."

In a follow-up interview, Krall added: "I personally never talked to them, spoke to them, received an email from them, ever. I never even had any correspondence about them with anyone else. As far as I know -- and I answer the phone 95 percent of the time -- I have never spoke with anybody from Bulletproof Securities."

Emails obtained from a Wisconsin's Public Records Law request does not show any contact between Bulletproof and Wisconsin DNR officials, despite the company's claims that it contacted the DNR in its July 18 letter.

In response to questions on the matter from the Milwaukee Journal Sentinel's Patrick Marley, Wisconsin DNR Conservation Warden David Zebro said he "did not remember seeing anything" with regards to Bulletproof notifying the Wisconsin DNR it would be arriving on site in Iron County.

An email from DNR Mining Director Ann Coakley confirms Bulletproof never reached out to the DNR, nor did Gogebic Taconite inform the DNR Bulletproof would be heading up to Iron County.

Ashland County DNR Conservation Warden Supervisor Dave Oginski also said in an interview neither he nor the law enforcement field wardens he oversees had any contact with Bulletproof prior to their arrival, though Bulletproof writes the opposite in its July 18 letter to the DSPS.

"Two of my law enforcement field wardens did have contact with Bulletproof Securities, but it wasn't until they arrived on site," said Oginski. "We were just in the field working on the site, so I don't know what would have been done prior to that."

"I am a bit taken aback about the questioning about the integrity of our letter," Parrella said in an interview with this reporter. "There really isn't much of an answer to give. The letter is correct to the 'T.' We stand behind the letter, and there's not much more to say than that. I'm sure everybody is running to cover their end, but that's not really our concern."

Gogebic Taconite lobbyist and spokesman Robert Seitz had this to say about the veracity of the July 18 letter:

"I don't know who they talked to, but when [we reached out to various state-level and local-level agencies] we had general conversations about security in general," said Seitz. "We talked in very general terms about security, not about a specific firm, not 'We're hiring them,' or something."

Bulletproof has faced no penalties or negative consequences -- not for operating without a license, and not for the questions surrounding its July 18 letter. In fact, less than three weeks after sending that letter, Bulletproof was granted a permit to operate in Iron County.

Though numerous emails and phone calls to DSPS Public Information Officer Kirsten Reader and to Meyer were to no avail. Both denied comment on Bulletproof's permit.

"Williams and two former co-workers were named in the investigation in a Seville court involving alleged environmental offenses by Cobre Las Cruces, according to a court document," explained the Associated Press. "The Spanish mining company has not been charged, nor have Williams or the other two executives. The next step in the process is for a prosecutor to present the case to a magistrate overseeing the investigation, who will decide whether the executives should be charged and tried."

Reached by phone, company spokesman Seitz said he believes the copper mine in Spain and GTac's iron mine are not related.

"I don't see any impact that it will have on us at this point," he said. "It's a different type of mining, it's a different set of regulations, everything's different about the project. We are moving ahead under Wisconsin regulation and U.S. regulation to try to permit this mine."

The laxity in Bulletproof's case stands in sharp contrast to the treatment of Katie Kloth -- a Stevens Point, WI, anti-mining activist -- who faces four criminal charges from Iron County District Attorney Martin Lipske: robbery with use of force, misdemeanor theft, criminal damage to property, and two counts of criminal damage to property for grabbing camera away from one of the Gogebic employees. She faces the possibility of 17 years in jail if convicted of all charges.

Gogebic Taconite has also slapped Kloth with $51,500 worth of restitution fees, demanding that she pay back what they paid to Bulletproof and two other private security firms -- Per Mar Security and Burns Civil Process and Security Services -- for their services, according to court documents obtained from Kloth's attorney, John Bachman.

These fees come on top of the $29,800 worth of overtime fees Gogebic Taconite paid area police forces to guard the mine during the days of increased activism over the summer, which the company has asked Kloth to pay back as restitution, according to a November 14 letter from Gogebic Taconite's legal counsel Scott Clark.

This brings the potential restitution fees owed by Kloth to over $80,000.

Kloth's attorney, John Bachman, sees the charges as highly political in nature. He says the mining company wants to make an example of his client. "If you protest we will make sure you go to jail and/or get a big money judgment placed against you," he wrote in an email. "If you protest you will be working to pay us off for the next 20 years."

Kloth's trial is set to begin on January 6 in Iron County.

Co-published with The Progressive Magazine

help pass law so any dem who covers his face and trasspasses should be in jail for five years.
Children in costume at Halloween had better be careful where they step.