The Madison Group, the predecessor to the State Policy Network (SPN) -- which was exposed recently in a Center for Media and Democracy (CMD) report, followed by the release of funding proposals detailing its coordination by The Guardian -- was "launched by the American Legislative Exchange Council or ALEC . . . and housed in the Chicago-based Heartland Institute." So says a 1991 report by the National Committee for Responsive Philanthropy (NCRP) that was housed in the University of California-San Francisco's Legacy Tobacco Documents and uncovered by DeSmog Blog's Steve Horn. 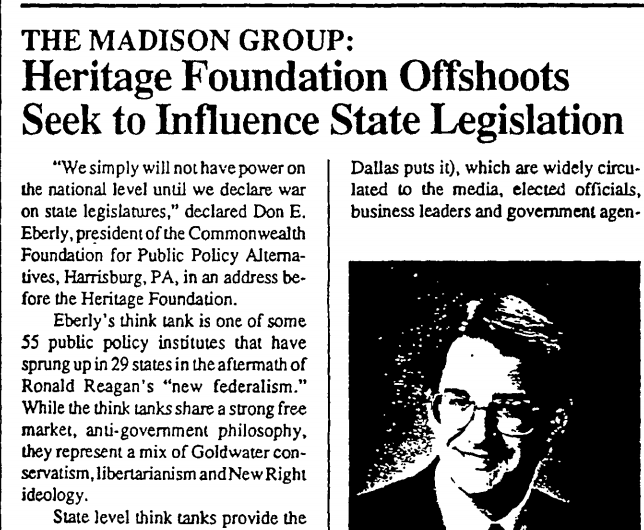 The case is strengthened by an October 1987 ALEC directory also available via the Tobacco Documents that says, "The Madison Group is chaired by Mrs. Constance Heckman [now Constance Campanella, founder of the lobbying firm Stateside Associates], Executive Director of ALEC . . ." (PDF, p. 3). A speakers list also available in the Tobacco Documents says in Constance Campanella's biography, " She was a co-founder and first President of The Madison Group, the first network of free-market state think tanks" (PDF, p. 3).

NCRP also reported that the Madison Group's annual meeting was at that time "sponsored by Heritage [Foundation] and the Free Congress Foundation," which was led by Paul Weyrich.

One of the gems found in the report is the following quote by the then-president of SPN's Pennsylvania affiliate, Commonwealth Foundation for Public Policy Alternatives, Don E. Eberley:

"We simply will not have power on the national level until we declare war on state legislatures."

To what end would this "war" be waged? NCRP reported, "Privatization is the altar at which the American Legislative Exchange Council and the Madison Group worship. . . . For most public services, it is believed [by these "think tanks"] the private sector not only acts more efficiently, but that it has the inalienable right to the task." Elsewhere, the report continues, "The state think tanks' agenda includes privatization of most public services, from mass transit to health clinics to environmental protection, and even libraries; vouchers and tax credits to promote competition between public and private schools; deregulation of business; opposition to labor-backed policies like the minimum wage and family leave; and rollback of taxes."

ALEC: "A Tremendous Positive Effect on the 'Bottom Line' of Your Company"

The report was sent in July 1991 to the Tobacco Institute's Kurt Malmgren, then Senior Vice President of State Activities, by ALEC's then-executive director, Sam Brunelli, with a note saying he sent it "to illustrate how effective ALEC has become." Accompanied by humorous handwritten notes from someone (Malmgren?) to Margaret Rita, the Tobacco Institute's then-Manager of Legislative Issues. "Winning is what ALEC is all about," Brunelli writes. "I think whining is more opprop!" (sic), Malmgren quips, and goes on to add an "h" to five of Brunelli's seven uses of the word "winning" in the cover letter.

On a more serious note, Brunelli's cover note also makes very clear that, far from the "transparent," "educational" organization ALEC now claims to be, ALEC told its funders a different story: "One hundred percent of our energy and effort goes into winning the public policy debate and championing a free market economy . . . [elipses original] a pro-business, pro-growth, pro-freedom, limited government agenda." Why? "[B]ecause winning the public policy debate will continue to have a tremendous positive effect on the 'bottom line' of your company," Brunelli tells Malmgren (and, presumably, ALEC's other corporate funders).

In 1991, ALEC Housed in Heritage Foundation Headquarters with Amway

The NCRP report also notes that ALEC was then "housed in the Washington, D.C. headquarters of the Heritage Foundation, a seven-story brick building on Capitol Hill, appointed with thick rugs, chandaliers [sic] and enormous floral arrangements. On the second floor, near the Ukrainian Congress Committee of America and Amway headquarters, ALEC has a suite of offices."

Former Amway President Dick DeVos and his wife Betsy DeVos (former chair of the Michigan Republican Party and brother of Erik D. Prince, founder of Blackwater/Xe/Academi) are long-time supporters of the Heritage Foundation and SPN affiliates such as Michigan's influential Mackinac Center for Public Policy.

The NCRP report also makes abundantly clear that ALEC's role is to facilitate what most would define as lobbying. It quotes ALEC materials saying, "The cornerstone of the ALEC program is the forum it provides for the private sector [read: for-profit corporations] to work in a one-on-one relationship with state legislators to develop public policies that are pro-growth, pro-business and pro-freedom."