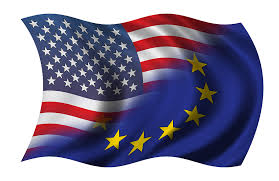 Another day, another outraged world leader. The NSA was caught listening in on Angela Merkel's cell phone much in the way the crooks at Murdoch's News of the World (now standing trial in a British courtroom) hacked into the phones of celebrities, politicians and teenage crime victims.

But there is one good thing coming out of the NSA embroglio. It is endangering the U.S.-EU trade agreement currently being negotiated behind closed doors with some 600 U.S. industry advisors. New revelations that the Office of the U.S. Trade Representative is one of the NSA's "clients" will further complicate negotiations set to resume in Brussels November 11.

TTIP: It is Not About Trade

Although proponents of the pact like to talk about reducing tariffs, facilitating trade and creating jobs, in actuality the Transatlantic Trade and Investment Partnership (TTIP) has little to do with these traditional trade topics. Bound by the longstanding World Trade Organization agreements, the U.S. and the EU have practically nonexistent tariffs and enjoy a robust trade relationship topping $1 trillion a year. Moreover, according to the number crunchers at the Economic Policy Institute, the pact is projected to result in a U.S. job loss of some 700,000 and a deeper trade deficit with the EU.

What the TTIP is all about is locking in a deregulatory regime that threatens some of the best consumer and environmental laws on both sides of the Atlantic.

At a recent meeting in Brussels with top U.S. and European TTIP negotiators, including Assistant U.S. Trade Representative Dan Mullaney and Ignacio Garcia-Bercero of the European Commission's Directorate General for Trade, consumer advocates from both sides of the Atlantic demanded answers.

Meeting under the auspices of the 14 year-old Transatlantic Consumer Dialogue, the consumer advocates pushed negotiators for the text of the agreement. "We have had some experience with this you know, words matter, commas matter," said Jamie Love, Director of Knowledge Ecology, while others pointed out that many bi-lateral and multi-lateral trade pacts are negotiated with texts being published frequently.

TACD was created during the Clinton administration to advise governments about transatlantic trade. But after surviving the Bush administration, TACD is getting few direct answers from Obama administration officials. At the TACD meeting, Team Obama stuck to shallow, Chamber of Commerce-style talking points and didn't have the diplomatic aplomb to wow the crowd with a promise of a meeting with U.S. Trade Representative Michael Froman, something TACD asked for months ago. Officials seemed unaware that the consumer advocates had presented them with highly detailed papers on the threat the trade agreement posed to key consumer protection laws in dozens of areas, including:

While the consumer groups pressed in a detailed way on online privacy, chemicals and financial services protections, trade negotiators and regulators simply asked consumer advocates to trust them and repeatedly promised not to lower standards. One particularly clueless EU health and consumer safety regulator told the crowd that the trade agreement had nothing to do with regulations. She apparently missed the earlier part of the meeting where the EU's chief negotiator, Bercero, admitted that the agreement was all about regulatory "barriers to trade."

Bercero seem quite aware that trade concepts like regulatory "equivalency" and "mutual recognition" of policies, when those policies have very different levels of consumer protection, threatens a race to the bottom, allowing a lower level of consumer protection to prevail in the context of a binding trade agreement with not just one, but two enforcement mechanisms.

Another issue that stirred outrage among the consumer groups was plans by negotiators to include an investor-state dispute resolution mechanism in the pact. While most trade agreements contain a state-state enforcement mechanism that allows governments to sue governments to enforce the terms of the agreement in a closed door trade tribunal, investor-state is a type of private court, where corporate interests can directly sue nations for cash damages over public health, consumer and environmental regulations that they feel have infringed on their profitability and rights granted under the agreement. While corporations can't overturn laws, the mere threat of a major cash damages suit has discouraged nations from pursuing certain types of regulatory policies and inviting more cases.

But the notion has been perverted through trade agreements to apply to "indirect" expropriation and it has been used in recent years not only to attack consumer laws, but to relitigate issues already decided by domestic courts in developed nations. Thus, we have the U.S. pharmaceutical giant Eli Lilly demanding $500 million from Canada in a NAFTA trade tribunal because the Canadian Supreme Court failed to give them monopoly patent rights over two drugs and we see Phillip Morris suing Australia via a Hong Kong trade agreement over new plain packaging rules for tobacco in an attempt to discourage smoking. In Europe, Germany's decision to phase out nuclear power in the wake of Fukushima is being challenged by a Swedish nuclear power company under another investment treaty.

To see what might happen under the TTIP, one only need look at a few examples from the corporate wish list. While TACD supports the strong European chemicals law called REACH, U.S. chemical industry wants exemptions from it. The American Chemical Council opines "A lack of regulatory compatibility with respect to endocrine disrupting chemicals could have a significant impact on trans-Atlantic trade, on agricultural as well as industrial goods." The Association of German Banks argues that the Volcker Rule, the centerpiece of the U.S. Wall Street reform act which clamps down on reckless Wall Street gambling, is much too burdensome for non-U.S. banks.

Monique Goyens, Director General of BEUC, the largest consumer federation in Europe, calls investor-state "a brazen approach" that "leaves open the possibility of private judgments being passed, outside of court, over government's future efforts to tighten up consumer protection."

The NSA spying scandal and revelations of mass surveillance in France, Spain and Germany has "shatterd" public trust in the negotiations, reports EU papers. The EU justice commissioner is already moving to ensure that EU consumers are protected from U.S. spying and U.S. companies. The AP reports that a growing number of European officials are calling for the suspension of the "Safe Harbor" data-sharing agreement, without which more than 4,200 American companies doing business in Europe, including Apple, Google, Facebook and Amazon could not function. Some are talking about a "parallel" agreement on data protection, that wouldn't "upset" the ongoing trade talks. Its unclear if this can be pulled off since data protection was not included in the negotiating mandate agreed to by EU member states. "This is new and potentially very dangerous," one official told the Financial Times. "It could seriously affect talks ... we would have to start the process all over again."

In an article "No Morsel Too Minuscule for All-Consuming NSA" the New York Times dropped another bomb into the negotiations. The paper reports that huge investment in collection is driven by pressure from the agency's customers,î including security agencies but also the Department of Energy, the Department of Commerce, and the United States Trade Representative. The paper reports that "diplomatic" and "economic" espionage is quite common for the NSA "an electronic omnivore of staggering capabilities."

At a recent meeting in Malaysia, Consumers International asked a USTR representative point blank if the agency received and utilized surveillance data, but the negotiator denied it.

In addition to the specter of USTR spying on EU negotiators or firms and passing on information to the 600 U.S. firms advising USTR on the trade agreement, some advocates are wondering if NSA is spying on them as well. "Organizations of U.S. citizens have a right to know that their government is not spying on them as they work to influence U.S. policy. This is something we all should be able to take for granted, but it is plain now that we can't," says Rob Weissman President of Public Citizen.

But many U.S. and European leaders want the trade deal to succeed, John Kerry is in the EU right now attempting to smooth feathers. The citizens and policymakers on both sides of the Atlantic, who fought for the policies now being targeted by industry as "barriers to trade," need to get active and loud before those polices disappear behind the closed doors of a trade tribunal.

The Center for Media and Democracy is a member of the Transatlantic Consumer Dialogue and contributes to its policy positions.