State officials in Arizona and Kansas are developing a new scheme to implement an American Legislative Exchange Council (ALEC)-approved bill requiring proof of citizenship at the polls. 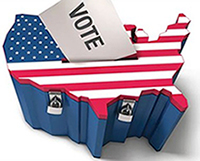 The new ploy is an effort to sidestep the U.S. Supreme Court's decision earlier this year in Arizona v. Inter Tribal Council of Arizona, which rejected an Arizona law requiring that voters show proof of citizenship to register to vote. In a 7-2 decision, the Court majority found that the law imposed additional restrictions beyond those in the federal National Voter Registration Act (NVRA), and because the Constitution's Elections Clause gives Congress the final word on election procedures, the legislation was preempted.

But Arizona and Kansas are now asserting the ruling only applies to federal elections, and are creating "two-tiered" ballots to try thwarting the decision. Voters who showed proof of citizenship to register will be allowed to vote in all local, state, and federal elections. Those who used the federal NVRA registration form -- which requires voters swear under threat of perjury that they are U.S. citizens, but doesn't ask for physical proof like a passport -- will be prohibited from participating in local and state elections; these voters will only be allowed to vote in federal races.

Kansas State Election Director Brad Bryant sent an email to county election officers at the end of July claiming the Inter Tribal Council decision "applies only to 'federal registration forms' and covers only federal elections." According to the email obtained by Talking Points Memo, Bryant claims that "states remain free to require proof of citizenship from voters who seek to also vote in state elections."

"At a minimum, it's a tremendous waste of resources at a time when people already are having to wait too long to vote in this state and it will deter voting for no good reason other than a vindictive attitude," he said.

Like many GOP-led efforts that make it harder for Americans to vote, the proof-of-citizenship requirements were promoted as a tool to prevent "voter fraud," despite little evidence of undocumented workers voting in state or federal elections.

Arizona's law, passed in 2004 as the ballot initiative Proposition 200, was another piece of anti-immigrant legislation supported by former Arizona state Senator and then-ALEC member Russell Pearce (who was recalled in 2010 amidst corruption allegations). After Proposition 200 became Arizona law, Pearce brought the bill to ALEC, and in 2008 the ALEC Public Safety and Elections Task Force adopted Proposition 200 as a "model" they titled the Taxpayer and Citizen Protection Act.

(Pearce was also behind Arizona's controversial SB 1070 "papers please" law that required local law enforcement enforce federal immigration law. That same ALEC task force approved the bill that became SB 1070 as an ALEC model in December 2009, before it was introduced in the Arizona legislature, in 2010. The U.S. Supreme Court struck down many parts of that law in June of 2012.)

ALEC has since claimed that immigration, gun, and voting bills are no longer its policy, but it has done nothing to repeal or oppose the adoption of bills that it promoted for years -- and the legislation continues to have an impact across the country.

After being adopted as an ALEC "model" in 2008, at least three other states have passed nearly identical versions of the proof-of-citizenship bill, and other states have introduced it. Kansas passed its version of 2011, with the support of its anti-immigrant Secretary of State Chris Kobach.

Voter Suppression under Another Name

ALEC is no stranger to restrictive voting measures. The same Task Force that embraced the Arizona proof-of-citizenship legislation adopted a restrictive "model" Voter ID Act in 2009. After the Republican takeover of numerous state legislatures in 2010, versions of that legislation were subsequently introduced in a majority of states, threatening the voting rights of millions of people who don't have the required forms of identification.

The proof-of-citizenship laws can also have a big impact, which could affect the outcome of state races in 2014.

Arizona rejected at least 30,000 voter registrations as a result of the new proof of citizenship requirement. In Kansas, since the law went into effect at the beginning of the year, between 12,000 and 13,000 new voters have had their voting privileges suspended because they didn't provide proof of citizenship. If this two-tiered ballot system is upheld, many of these voters could be shut out of their state and local races -- where elections are sometimes decided by just a handful of votes.

Time for people to start using their Buycott app.
VOTERS SUPRESSION: I cannot believe these folks are citizens of the USA. What is the supreme court doing about this disgraceful situation? Where is the outrage of what is against our rights. Everything is wrong with this picture. McDowell or what whatever, is about to run for governor and also governs the process to actually suppress the vote. This man will make himself governor also and no one does anything about it. What a travesty of power. IS ANYONE WITH SENSE PAYING ATTENTION. PEOPLE LIKE THESE WHO ARE PART OF TRYING TO BRING OUR NATION TO ITS KNESS MUST BE KICKED OUT OF OFFICE EXPEDITIOUSLY. Totally Disgraceful!!!!
Picky, picky, picky, I know. Kansas' anti-immigrant Secretary of State Kobach spells his first name Kris, not Chris. Just a head's up for anyone quoting the article.