On Tuesday, the U.S. Supreme Court will hear oral arguments in a case that could further expand the reach of its controversial ruling that political spending is a form of speech protected by the First Amendment -- and which could give the one percent even more influence over politics. 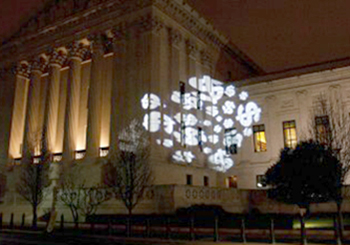 In McCutcheon v. FEC, the Court will hear a challenge to regulations on the total amount a person can contribute to political candidates. The Court's five-person majority in recent years has expressed hostility to limits on expenditures made "independent" of political campaigns, most famously in Citizens United, which struck down limits on corporate independent expenditures and paved the way for Super PACs and the scourge of dark money nonprofits. But the McCutcheon case involves a challenge to limits on how much a person can donate directly to a candidate, which the Court has previously upheld as constitutional.

The biggest concern about McCutcheon is whether the court will re-engineer the formula it uses to assess the constitutionality of campaign contribution limits. This could eventually lead to an end to limits on direct contributions to candidates. In fact, failed presidential candidate Mitt Romney previously called for the elimination of how much money anyone could give directly to a candidate.

Post-Citizens United, wealthy donors can now give unlimited amounts to Super PACs, but still must comply with limits on donations to candidates and political parties.

Under current law, individuals may give no more than $2,600 to any one federal candidate running for office and up to $48,600 spread among multiple candidates. Donors may also give up to $74,600 a year to a political party's national committee (like the Republican National Committee) and traditional PACs, for a total of $123,200. (Corporations and unions have circumscribed ways they can give to candidate, such as through a corporate PAC made up of donations by executives and other employees.)

The case before the U.S. Supreme Court is challenging those aggregate limits. The current limits far exceed the annual income of most Americans, but they still place some limits on how much the 1% can funnel to campaigns.

Shaun McCutcheon, an Alabama resident, said he wanted to give a total of $75,000 to party committees and $54,400 to candidates in the 2012 elections. The other plaintiff, the Republican National Committee (RNC), wants to receive contributions beyond the cap.

If the Supreme Court sides with the plaintiffs, it would be the first time in history that it has declared a direct contribution limit unconstitutional.

Congress' reasoning behind these aggregate limits is to limit the influence of any one person, particularly to prevent a single donor from making numerous contributions to multiple party committees or PACs which then turn around and support a single candidate.

The decision's impact on "joint fundraising committees" could allow individuals to do just that -- indirectly funnel huge contributions to candidates. Joint fundraising committees operate by allowing a donor to write multiple checks to multiple party committees, each of which uses the contribution to support a single candidate. The dollars are usually raised at a single fundraising event, often with the candidates present; both President Obama and Mitt Romney collected over $400 million each using these committees.

The only reason they didn't raise more using joint fundraising committees are the aggregate limits. Individual donors in 2012 could give no more than $70,000 to these joint committees.

But if the plaintiffs in McCutcheon were to have their way, a federal candidate could solicit, and a single individual could contribute, over $1 million to a joint fundraising committee party in a two-year election cycle. The party could then use that entire donation to support the same candidate who solicited the contribution.

Candidates who are the beneficiaries of such a large contribution "will know precisely where to lay the wreath of gratitude," found DC District Court Judge Janice Rogers Brown in a 2011 decision upholding the aggregate limits.

Judge Brown, who was appointed by President George W. Bush and is generally considered an activist "conservative" jurist, rejected assertions by McCutcheon and the RNC that the aggregate limits are "unconstitutionally low and unconstitutionally overbroad." The Supreme Court is considering the appeal of her decision.

Court Could Change the Standard of Review for Campaign Finance Laws

In addition to challenging the aggregate limits, McCutcheon and Senator Mitch McConnell are asking the court to change the standard of review it uses to assess campaign finance laws (McConnell, the Republican leader of the Senate, filed an amicus brief but has been allowed to participate in oral argument, making him almost like a party to the suit). The "standard of review" is essentially a question of how strictly a court will scrutinize a particular regulation, and how high of a bar the government must meet to show that a regulation is constitutional.

Since the U.S. Supreme Court's 1976 decision in Buckley v. Valeo, the Court has had a two-tiered approach, scrutinizing limits on independent expenditures -- like those at issue in Citizens United -- more strictly than regulations on direct candidate contributions.

The underlying theory for this two-tiered system is the notion that political spending is a form of "speech," a notion established by Buckley in 1976 that many Americans reject (even if courts do not). Trevor Potter explains:

The theory is that a limit on a person's campaign expenditures directly restricts that person's own political speech, whereas a contribution limit merely limits the degree to which that individual can symbolically show support for another person's speech.

The Court has upheld contribution limits when they are reasonably related to a legitimate government interest, which is not a high bar to meet. Expenditure limits, in contrast, must meet the test of "strict scrutiny," which means they will be struck down unless the limits are "narrowly tailored to meet a compelling government interest."

The concern in McCutcheon is that the Court could overturn four decades of judicial precedent that treat independent expenditures and direct contributions differently.

In Citizens United, the Court's five-justice majority narrowed the number of acceptable governmental interests for campaign finance regulation -- rejecting, for example, goals like "leveling the playing field" and preventing donors from buying access to politicians -- such that now, the only legitimate government interest for campaign finance regulation is combatting corruption. The Citizens United majority then ruled that limits on corporate independent expenditures were not narrowly tailored to meet that goal: spending made independently of a candidate, the court reasoned, presents little risk of corruption. And, the Court narrowly defined "corruption" to only encompass quid pro quo corruption.

In this way, the Citizens United decision made it more difficult to enact campaign finance limits. Expenditure regulations can now only be justified by showing they are narrowly tailored to prevent quid pro quo corruption.

The McCutcheon case could change the balance on the other side of the scale: how heavily to weigh a regulation that burdens "speech" in the form of political spending. The Court had previously said that limits on direct contributions are a less heavy burden on speech than those affecting independent expenditures, and therefore, the government has less of a burden to show that the regulation is justified. The plaintiffs in McCutcheon (as well as Senator McConnell) are asking the court to declare that limits on both expenditures and contributions are similarly heavy burdens, meaning that the government must add more to the "governmental interest" side of the scale.

This is particularly problematic because in the post-Citizens United world, there are fewer justifications for the regulations that the government can put on its side of the scale -- making it a difficult task to continue defending campaign finance regulations.

Groups filing friend-of-the-court ("amicus") briefs in support of upholding the campaign finance limits are urging the Court to adopt a more expansive definition of corruption, beyond just quid pro quo. An amicus brief from Harvard Professor Lawrence Lessig, for example, presents research showing the Founding Fathers understood "corruption" to encompass institutional and other concerns -- and collected the research in a Tumblr Appendix to the brief, which is the first Tumblr ever filed with the court.

Will an Even Smaller Circle of Elites Get even Greater Influence over Public Policy?

Under current campaign finance laws (and outside of the Super PAC realm), political campaigns are primarily funded by a small handful of wealthy donors. Candidates for both House and Senate in the 2012 elections raised the majority of their funds from donors giving $1000 or more. At least 40% of all contributions to U.S. Senate candidates and 32.5% to House candidates came from donors giving the maximum $2,500 contribution limit; those donors amounted to just 0.02% of the American population.

Campaign finance reformers are concerned that lifting the aggregate cap on contributions would further concentrate political influence in the hands of an elite few. Only a sliver of one percenters are in a position where they can spend beyond the already-existing $117,000 cap on donations to candidates and party committees.

The outcome of McCutcheon is not a foregone conclusion. But many are hoping the Court will respect decades of judicial precedent and uphold the aggregate contribution limits, and prevent the further concentration of political power in the hands of those with the greatest resources.

It has no head with a mouth that speaks, no body with arms and legs and certainly cannot walk so the only conclusion one can come to is money cannot talk therefor not speech.