For-profit prison companies like Corrections Corporation of American and GEO Group are no strangers to controversy. Their business model rests on incarceration, and their profits soared throughout the 1990s and 2000s as harsh sentencing laws, the War on Drugs, and tough immigration enforcement led to a dramatic rise in detention and incarceration.

But with crime rates dropping for more than a decade and a new push for sentencing reform and cost-effective alternatives to incarceration, for-profit prison operators have found a new way to keep beds full and profits high. They call them "bed guarantees."

A new report from In the Public Interest, a resource center on privatization and public contracting, documented for the first time that some 65 percent of contracts between for-profit prisons and state or local governments include bed guarantees or "lockup quotas." These contractual clauses require that a state keeps prisons full, usually at ninety percent, but in some cases up to a one hundred percent occupancy requirement.

If judges and law enforcement are not pushing enough people into for-profit prisons to meet the quota, taxpayers are on the hook for any unused beds.

"Private prisons have gamed the system and tied the hands of policymakers across the country to an alarming degree," says report author Shar Habibi, In the Public Interest Research and Policy Director.

The lockup quotas range between 70 percent in a California facility to 100 percent in an Arizona facility, with most contracts requiring a 90 percent occupancy. In Ohio, a 20-year deal with CCA to privately operate the Lake Erie Correctional Institution includes a 90 percent quota; cost-cutting measures in the facility have also led to significant growth in violence, gang activity, and drug use.

Given the longstanding, cozy relationships between for-profit prison companies and legislators -- developed by way of significant campaign contributions, lobbying expenditures, and participation in the American Legislative Exchange Council (ALEC) -- questions have long been raised about their role in promoting policies that put more people behind bars and create more demand for prisons. Although these companies have denied lobbying for tough on crime laws, lockup quotas can have a similar impact.

"To keep their private business model successful, [for-profit prison companies] look to the children of tomorrow as the next harvest for their shareholders," says Justin Jones, former head of the Oklahoma Department of Corrections. "Society deserves better."

Bed guarantee clauses can encourage tough enforcement and sentencing policies, or, at a minimum, can help deter criminal justice reforms that reduce sentences and focus on rehabilitation rather than incarceration. And reform in this area is long overdue.

America has become the world's leader in incarceration, with around half of all prisoners in state facilities there for nonviolent crimes, and half of inmates in federal prisons serving time for drug-related offenses. And the impact of mass incarceration has been disproportionately borne by communities of color. For example, people of color are no more likely to use or sell illegal drugs than whites, but have much higher rate of arrests; just 14 percent of regular drug users are black, but they represent 37 percent of those arrested for drug offenses.

But the social costs of mass incarceration have little relevance for CCA or GEO shareholders or Wall Street investors.

"These lockup quotas are morally reprehensible," said Reverend Michael McBride with PICO National Network. "We have a moral charge to rehabilitate incarcerated persons, not to provide an incentive for filling up cells."

"Corrections should not be a turnkey for profit machine, and that's what we turn them into with lockup guarantees," said Jones, the former head of the Oklahoma Department of Corrections.

In Colorado, even though crime has dropped by a third in the past decade, a lockup quota covering three for-profit prisons has forced taxpayers to keep CCA's prisons full, even as state facilities remain empty; the state has wasted at least $2 million in taxpayer money by using CCA's prisons instead of its own.

"Where else can private contractors get paid for services they do not perform?" asks Alex Friedman, Managing Editor of Prison Legal News.

In Arizona, where three for-profit prison contracts have a 100 percent quota, reports show that the company's per-day charge for each prisoner has increased an average of 13.9 percent over the course of the contracts.

"When entering a contract to operate a prison, a private company should be required to take on some risk," ITPI's report concludes. "Private prison beds were intended to be a safety valve to address demand that exceeded public capacity. It was never intended that taxpayers would be the safety valve to ensure private prison companies' profits."

CCA and GEO are the largest for-profit prison operators in the United States. Almost all of their profits are generated by government contracts and therefore come directly from taxpayers. Yet their facilities are failing to deliver, with increased costs, higher levels of recidivism and egregious levels of violence and even death.

The Center for Media and Democracy has created extensive corporate rap sheets on Corrections Corporation of America and GEO Group on its wiki resource Sourcewatch.org. The profiles document: 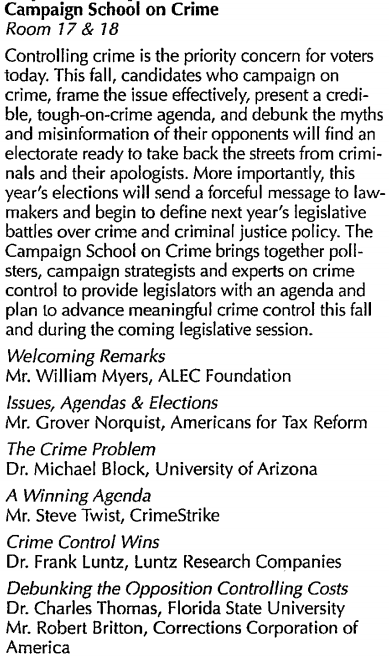 In addition, the profiles connect the dots between CCA, GEO Group, and organizations like the American Legislative Exchange Council (ALEC), which pushed legislation to privatize prisons, and at the same time spearheaded the effort to advance harsh sentencing bills to put more people in prison for more time. ALEC was a key proponent of "three-strikes-you're-out" and "truth-in-sentencing" bills, which became law in a majority of states during the 1990s and early 2000s and helped balloon prison populations. GEO Group was an ALEC member for many years and CCA led the Criminal Justice Task Force in the late 1990s.

"Crime control" became a campaign strategy for winning elections in the 1990s -- particularly after the racially-charged "Willie Horton" ad in the 1988 presidential campaign -- and private prisons were presented as a possible solution. At a 1994 ALEC conference, for example, CCA's Robert Britton and Crime Strike's Steve Twist were part of a presentation titled "Campaign School on Crime" designed "to provide legislators with an agenda and plan to advance meaningful crime control this fall and during the coming legislative session." Also part of the "Campaign School" training were Republican pollster Frank Luntz and anti-tax activist Grover Norquist (who in more recent years has become a supporter of criminal justice reform).

"This fall, candidates who campaign on crime, frame the issue effectively, present a credible, tough-on-crime agenda, and debunk the myths and misinformation of their opponents will find an electorate ready to take back the streets from criminals and their apologists," the agenda item read.

Using "crime control" as a political strategy helped lead to America's mass incarceration boom, and high profit margins for CCA and GEO Group -- which these companies are now trying to maintain with lockup quotas.

Read more at the Corrections Corporation of America and GEO Group profiles on our sister site Sourcewatch.org.

Prohibitionists have always been murderous parasites: In 1926, during alcohol prohibition, the federal government began a campaign of deliberately poisoning vats of liquor with kerosene, gasoline, benzene, cadmium, iodine, zinc, mercury salts, nicotine, ether, formaldehyde, chloroform, camphor, carbolic acid, quinine, acetone, methanol, and several other deadly toxins. Estimates place the body count above 10,000. * Illegal Drug Cartels cannot operate without the support of politicians, bureaucrats, and police officers. * Keeping various psychoactive plants and their derivatives illegal and unregulated means robberies, home invasions, murders, broken families, shattered lives—all mostly done by law enforcement agencies. Add to that list: environmental devastation, poisoning of lands, streams and wildlife—all preventable by regulated legalization. * Prohibition has been a slow but relentless degradation (death by a zillion cuts) of all our cherished national and international institutions that will leave us crippled for numerous generations. * The US federal government is now the most dangerous and corrupt corporation on the planet; it is solely comprised of traitorous, lying hucksters who spy on us—in the MPICIC (military/police industrial corporate intelligence complex), the 99% are all probable suspects. * In 1989, The Kerry Committee found that the United States Department of State had made payments to drug-traffickers. Concluding, that even members of the U.S. State Department, themselves, were involved in drug trafficking. Some of the payments were made even after the traffickers had been indicted by federal law enforcement agencies - or even while these traffickers were under active investigation by these same agencies. * The involvement of the CIA in running Heroin from Vietnam, Southeast Asia and Afghanistan, and Cocaine from Central America, has been well documented, by the 1989 Kerry Committee report, academic researchers Alfred McCoy and Peter Dale Scott and the Pulitzer Prize winning journalist, Gary Webb. * The United States jails a larger percentage of it's own citizens than any other country in the world, including those run by all the other worst totalitarian regimes, yet it has far higher use & addiction rates than most other countries. * As with torture, prohibition is a grievous crime against humanity. If you support it, or even simply tolerate it by looking the other way while others commit it, you are an accessory to a very serious moral transgression against humanity. * The United States re-legalized certain drug use in 1933. The drug was alcohol, and the 21st amendment re-legalized its production, distribution and sale. Both alcohol consumption and violent crime dropped immediately as a result. And very soon after, the American economy climbed out of that same prohibition engendered abyss into which it had foolishly fallen.