Failing Up to the Fed, A Reporters' Guide to the Paper Trail Surrounding Larry Summers | PR Watch

Failing Up to the Fed, A Reporters' Guide to the Paper Trail Surrounding Larry Summers

The Washington Post's Ezra Klein reports that Larry Summers is the "overwhelming favorite" of the Obama team for the job as Federal Reserve chairman. To convince the American public that one of the chief architects of the 2008 financial crisis should be the chief regulator of the U.S. financial system, supporters of Summers have their work cut out for them.

The New York Times reports that some of Mr. Summers's supporters "argue that better oversight of derivatives would not have prevented or significantly diminished" the 2008 financial crisis. One former Treasury official told the Times that Summers secretly wanted derivatives regulated, but couldn't win the support of Greenspan or Senate Republicans so dropped the idea.

For journalists who are being told what a brilliant man and insightful regulator Larry Summers was behind the scenes, here are a few items from his public record you might want to review.

The final report of the National Commission on the Causes of the Financial and Economic Crisis in the United States puts over-the-counter (OTC) derivatives "at the center of the storm," and specifically cites the Commodities Futures Modernization Act as a major contributing factor. "The enactment of legislation in 2000 to ban the regulation by both the federal and state governments of over-the-counter derivatives was a key turning point in the march towards the financial crisis." Read the report here.

In the spring of 1998, Deputy Treasury Secretary Larry Summers called Brooksley Born, the head of the Commodity Futures Trading Commission (CFTC), and yelled: "I have 13 bankers in my office who tell me you're going to cause the worst financial crisis since the end of World War II" if she moved forward with plans to bring transparency and reporting requirements to the OTC market. OTC derivatives were already causing huge loses around the globe. In 1994 Orange County California lost $1.5 billion speculating on OTC derivatives. Watch the Frontline investigation "The Warning" here.

Summers attacked Born publicly, testifying in Congress in July 1998: "As you know, Mr. Chairman, the CFTC's recent concept release has been a matter of serious concern, not merely to Treasury but to all those with an interest in the OTC derivatives market. In our view, the Release has cast the shadow of regulatory uncertainty over an otherwise thriving market -- raising risks for the stability and competitiveness of American derivative trading. We believe it is quite important that the doubts be eliminated." "The parties to these kinds of contracts are largely sophisticated financial institutions that would appear to be eminently capable of protecting themselves from fraud and counterparty insolvencies." Read Summers testimony here.

One of Summers primary arguments was that any new regulation could invalidate the burgeoning swaps market, yet Born made it clear in her release and in her testimony that new rules would be prospective. Previously the CFTC had generated prospective rules. "The release does not in any way alter the current status of any instrument or transaction under the Commodity Exchange Act. Any proposed regulatory modifications resulting from the concept release would be subject to rulemaking procedures, including public comment, and any changes that imposed new regulatory obligations or restrictions would be applied prospectively only." Read the concept release here.

Even though the 1998 Long-Term Capital Management derivatives disaster shook regulators and demonstrated that derivatives deals could pose systemic risk to the entire economy, bank regulators and Congress ignored Born who cited "an immediate and pressing need to address possible regulatory protections in the OTC derivatives market." Instead they placed a six month moratorium on any CFTC regulation and Born resigned in early 1999. Read Born's speech on LTCM here.

Summers became Treasury Secretary in July 1999, receiving a congratulatory letter from Ken Lay, the President of Enron Corporation, addressed "Dear Larry." In his response to "Ken" on May 25, 1999, Summers included a handwritten PS: "I'll keep my eye on power deregulation and energy-market infrastructure issues." Read the letters here.

Summers helped negotiate the World Trade Organization's Financial Services agreement that opened global markets to derivatives and other financial products and made it harder for signatory nations to regulate banking in the public interest. In the WTO agreement, which was negotiated behind closed doors, the United States effectively pledged to get rid of the 1933 Glass-Steagall law, which was seen as a barrier to market entry by many foreign banks that were structured differently. In 1997, Tim Geither urged Larry Summers to personally call the heads of America's top five banks to seal the deal. See the Geithner memo to Summers here and attached below.

Summers pushed for the repeal of the Glass-Steagall, which was created after the Great Depression to wall off traditional commercial banking activity from the Wall Street casino. The repeal allowed commercial banks to merge with investment banks, securities firms and insurance companies, creating "too big to fail" behemoths and unleashing an era of reckless speculation. On November 5, 1999 Summers hailed the passage of the repeal: "Today Congress voted to update the rules that have governed financial services since the Great Depression and replace them with a system for the 21st Century. This historic legislation will better enable American companies to compete in the new economy." Read the statement here.

On November 9, 1999, Summers and other regulators issued a report that would serve as the Congressional blueprint for the Commodities Futures Modernization Act drafted the following year. The "President's Working Group on Financial Markets" concluded that "under many circumstances, the trading of financial derivatives by eligible swap participants should be excluded from the CEA [Commodities Exchange Act]. To do otherwise would perpetuate legal uncertainty or impose unnecessary regulatory burdens and constraints upon the development of these markets in the United States." Read the Working Group Report here.

Summers personally reassured Ken Lay on November 22, 1999 that Enron's derivatives trades would not be regulated, directing him to pages 34-35 in the Working Group report that reads "in light of their small market share and the apparent effectiveness of private counterparty discipline in constraining the risk-taking of such derivatives dealers, the Working Group is not recommending legislative action with respect to such derivatives dealers at this time." Read the letter here.

Summers wrote to Congress on December 15, 2000 to "strongly support" the Commodities Futures Modernization Act. The bill that went even further than the legal changes called for in the President's Working Group Report, exempting derivatives from regulation by any federal bank regulator not just the CFTC. Summers also allowed the "Enron Loophole" to be included in bill (over the objections of the CFTC), which exempted energy trading on electronic commodity markets from regulation and helped Enron to gouge billions of dollars from West Coast consumers. Read the letter in the Congressional Record here.

As energy prices skyrocketed in California, Summers opposed Governor Gray Davis' plan to intervene with price controls, claiming: "This is classic supply and demand. The only way to fix this is ultimately by allowing retail prices to go wherever they have to go." Enron filed for bankruptcy in 2001, putting 20,000 employees out of work and Ken Lay was convicted of 10 counts of securities fraud, wire fraud and other offenses. Read Kurt Eichenwald's 2005 book on the collapse of Enron, "Conspiracy of Fools."

Summers departed the Treasury in 2001 and went off to be the President of Harvard, where he ignored repeated warnings by expert staff and lost Harvard some $2 billion of its endowment funds, including $1 billion on toxic interest rate swaps. Read about it in the Boston Globe and Bloomberg News.

Back at the White House in 2009 as head of the National Economic Council, Summers was a chief architect of the generous bank bailout, the weak stimulus and the limited structural reforms in Dodd-Frank. Summers opposed numerous efforts to strengthen the bill, most tellingly, the President's effort to include the "Volcker Rule." Volcker's aim was to put an end some of the riskiest practices by curtailing proprietary trading at U.S. banks and limiting their investments in private equity firms and hedge funds, but the rule was slow walked and weakened by Summers. Read Richard Wolffe's book "Revival: The Struggle for Survival Inside the Obama White House." 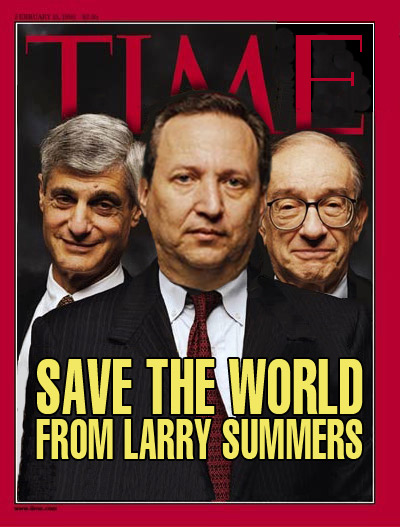 In the years that followed the 2008 meltdown, Clinton, Greenspan, Levitt even Rubin admitted they made mistakes or expressed some regret for these actions. Summers abided by his own advice to Geithner, as Geithner prepped for his confirmation session as Treasury Secretary, "don't anyone admit we did anything wrong." Read Ron Suskind's "Confidence Men."

In 2012, Summers was grilled by a British reporter and defended his record on derivatives, saying "at the time Bill Clinton was president, there essentially were no credit default swaps. So the issue that became a serious problem really wasn't an issue that was on the horizon... If you want to assign responsibility, If you take a market that essentially didn't exist in the 1990s, that grew for eight years from 2001 to 2008, and then brought on a major collapse, if you were looking to hold people responsible, you would look to... officials of the Bush Administration." Credit default swaps were invented by JP Morgan Chase to offset the risk of the Exxon Valdez disaster in 1994 and plenty of people were worried about them, including presidential adviser Joseph Stiglitz. Watch the Summers interview.

In the shadows, between 2000-2008, the OTC derivatives market grew from $95.2 trillion to $672.6 trillion, notational value. When the dark market deals started to go sour, the impact was felt around the world. The man who was featured on the cover of Time Magazine as part of the "Committee to Save the World" with Robert Rubin and Alan Greenspan in 1999, instead helped bring it to its knees.

In the shadows, between 2000-2008, the OTC derivatives market grew from $95.2 trillion to $672.6 trillion, notational value. When the dark market deals started to go sour, the impact was felt around the world. The man who was featured on the cover of Time Magazine as part of the “Committee to Save the World” with Robert Rubin and Alan Greenspan in 1999, instead helped bring it to its knees. http://fourneaubruleurdegraissez.fr/
Any report on Lawrence Summers should include that he is on the board of The Broad Foundation promoting corporate eduction reform. http://tinyurl.com/mhsx3uk