Common Cause and the Center for Media and Democracy said the "scholarship fund" scheme also raises serious questions about ALEC's compliance with state gift and disclosure laws, and the ethics of lawmakers who accept ALEC's travel payments.

The watchdogs said that by funneling money through ALEC, that group's corporate sponsors are able to take a federal tax deduction for the cost of wining, dining and housing lawmakers and their families at resorts and events like ALEC's 40th anniversary meeting this week at Chicago's posh Palmer House Hilton (August 7-9). Meanwhile, ALEC conceals the sources of the funds from the public and hides the amount of spending from the IRS by claiming that it only holds the funds in "trust," while writing lawmakers' checks to cover their trips.

Common Cause and CMD laid out details of the fund's operation in an IRS tax whistleblower complaint and letter to the IRS Commissioner.

The groups have built their case based on documents obtained through open records requests, and are taking a number of actions this week to urge a crackdown on the ALEC slush fund's operation, including:

"ALEC pledged this spring to be more transparent. This is a chance for the organization to keep that promise," said Arn Pearson, Common Cause's vice president for policy and litigation. "Our elected officials really should not accept expense-paid trips and lodging from special interests, but if they choose to do so, the voters are entitled to know who is paying, and how much."

"We now know which corporations funded trips to posh resorts for hundreds of lawmakers to vote behind closed doors with lobbyists on proposals to change state laws," said Lisa Graves, executive director of CMD and alecexposed.org. "It's disgraceful for ALEC to use its tax-exempt status to act as a conduit for gifts to facilitate influence peddling that advances the lobbying agenda of special interests to the detriment of ordinary Americans. This is corruption."

The ALEC confabs bring together corporate executives, lobbyists, and state lawmakers for closed-door meetings where they vote side by side on pro-corporate legislation to take back to their states. ALEC's agenda includes the privatization of schools and other public assets, anti-labor laws, weakened protections for clean water and air, and telecom deregulation bills. ALEC's legacy includes a national drive on behalf of "Stand Your Ground" laws like the Florida statute at issue in the Trayvon Martin shooting, and restrictive Voter ID measures that make it harder for students, elderly, minority and disabled voters to cast their ballots.

Most of the money in the scholarship fund comes from telecom, pharmaceutical, tobacco, alcohol, and oil and gas industry giants -- companies and trade associations that benefit financially from the passage of state legislation promoted by ALEC.

The top 10 corporate donors to the ALEC scholarship fund for the years data is available are: 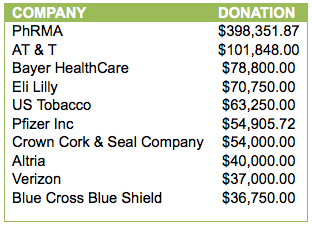 The CMD-Common Cause report said ALEC promotes its meetings "in vacation-like terms." One of its invites promised legislators "endless sandy beaches, sunny days, beautiful sunsets and the cool gulf breezes." The event was at a luxury hotel, near a golf course where ALEC funder R.J. Reynolds Tobacco sponsored a clinic and tournament for lawmakers and lobbyists, the report said, one of many such events.

Others -- Marcus Owens, the former head of the IRS' nonprofit tax section, and Bob Sloan of the Voter Legislative Transparency Project -- have also urged the IRS to investigate misrepresentations they allege ALEC has made in its federal tax filings regarding its lobbying and its payments for travel by elected officials.

The top 10 states receiving ALEC "scholarships" for legislators for the years data is available were: 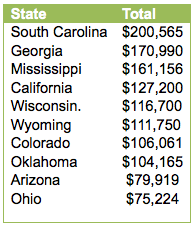 "The end of Democracy and the defeat of the American Revolution will occur when the government falls into the hands of the banks and corporations". Thomas Jefferson.
There were rumors at the event that many of the women wearing ALEC name badges were actually prostitutes brought in for the members. I can say from what I saw that several of the women wearing ALEC badges looked very "professional", and not in a corporate sense. When I confronted some of the men outside standing with women wearing ALEC badges about this rumor they just laughed. Even the women. What woman laughs at insinuations of being a prostitute?? And not one ALEC member denied the allegations.
All around the world governments have been bought by the corporate elite. The USA is merely the prime example. If citizens just concentrate on individual flaws in the system they will never get around to considering the 'elephant in the room' - the political system itself. I term our various versions of political system in 'The West' as being a feudal democracy, where the few (politicians) rule over and control the many (citizens). This type of political structure is hierarchical in nature and allows the few to be bought and controlled by the super elite, and where the citizens have absolutely no opportunity to CONTROL the politicians. These political systems are NOT democratic and have never been so. The major flaw - feudal democracy - has to be tackled if we are ever going to have a political system which is actually organised for the benefit of the citizens. Here's a list of my blogs trying to shed light on the political system itself. www.lougogan.com/politics/blog-list.php The fact is that the ruling feudal elite are very organised and have a set agenda. Citizens need to understand the problem and be as, or more, organised - and even more determined, that they will not remain as serfs. 'They' are the few and we are the many but if the many don't start to think - OUTSIDE THE BOX - we will lose the battle.
Just want to thank CMD/AlecExposed and Common Cause for your hard work on getting to this point. What is summed up in a press release, I'm sure, took months of work. The fact that the IRS has not gone after their fake tax status for 40 years is not a good sign for what they might do with this (but I am still hopeful), and as importantly, ALEC members are feeling the heat of serious legal scrutiny, and more and more citizens being aware and angry every day... Keep up the good work and look forward to updates. Please let us know what media this appears in, too. We need to get this out as much as possible.