Do you know how much the average CEO in the United States makes in comparison to the average worker? Do they make 40 times what workers make? Not even close, the ratio hasn't been that low since 1982. 200 times as much? Not since 1992. 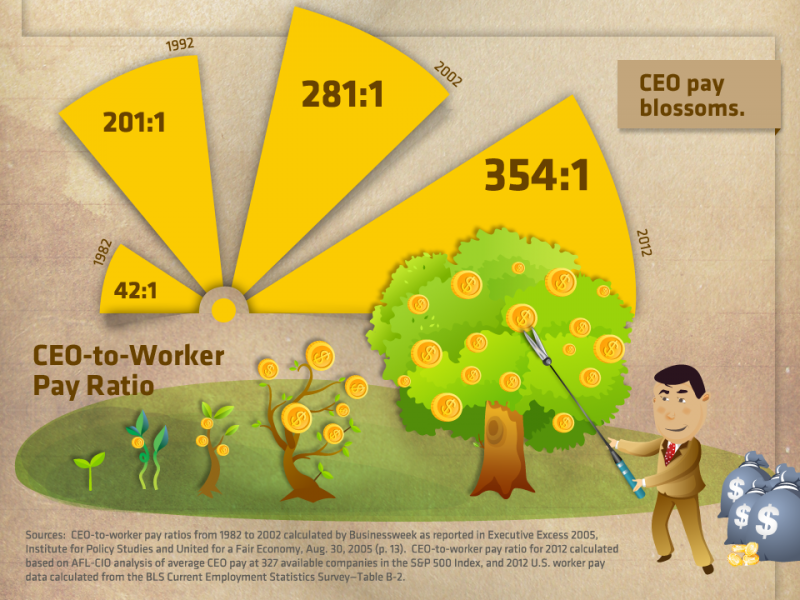 In 2012 the average CEO made a whopping 354 times as much as the average worker. For example David M. Cote, Chairman and CEO of Honeywell, received over $33 million in total compensation in 2012, almost one thousand times the salary of the average worker. The disparity is even more stark when looking at our country's lowest paid workers: Cote's compensation equals that of 2,205 people working at minimum wage. This information and much more is now available on www.PayWatch.org, a website sponsored by the AFL-CIO, the nation's largest federation of unions.

From state to state, the website breaks it down. In Wisconsin for instance, the PayWatch website shows that the average Wisconsin CEO made $4,907,639. In contrast, the average Wisconsin worker makes $38,869.48. Among the wealthiest CEOs in the state were Johnson Controls, Inc. CEO Stephen Roell who made $21,382,876 and Wisconsin Energy Corp. CEO Gale E. Klappa who made $13,077,978.

AFL-CIO President Richard Trumka explained the reasons for highlighting this type of information. "Runaway CEO pay is fueling economic inequality in the U.S. and undermining our shared prosperity. In addition, high levels of CEO pay can encourage excessive risk by CEOs, which hurts the long-term prospects of the companies they run."

PayWatch and Fix the Debt

PayWatch was started in 1997 by the AFL-CIO in order to track the pay of American CEOs. The 2013 version of the site was launched yesterday on Tax Day, with new data specifically highlighting the companies and CEOs who are members of Pete Peterson's astroturf supergroup "Fix the Debt," like Honeywell's David M. Cote.

While Fix the Debt CEOs are pushing for cuts to Social Security and Medicare as part of a "Grand Bargain" on the debt and the deficit they are also holding massive amounts of money in offshore accounts and pushing for a tax break on profits earned overseas -- a proposal that would greatly contribute to the deficit. You can find their untaxed offshore holdings listed on the site. (Read CMD's expose on Pete Peterson's astroturf supergroup "Fix the Debt" at www.PetersonPyramid.org to learn more.)

A new website that examines the actions of the corporate directors who are supposed to be keeping an eye on CEOs is in the works from the economists at the Center for Economic and Policy Research (CEPR) in partnership with the Huffington Post. DirectorWatch "will highlight directors who get large paychecks even as the companies they ostensibly oversee are going down the tubes."

For instance, the site will profile directors like Erskine Bowles, who serves on the board of numerous Fortune 500 companies and is one of the founders of Fix the Debt. According to CEPR, Bowles "has made several million dollars serving as the director of companies' whose stock price has plummeted. He was a director at General Motors at the time it went bankrupt and at Morgan Stanley when it was bailed out by the government. He was also a director at Facebook during the period when the value of its stock fell by close to 50 percent."

CEPR is looking for help through an indiegogo campaign to raise the money needed to launch this resource.