In Tuesday's State of the Union, five days before what is anticipated to be the largest climate rally in the U.S. history, President Obama made his message on climate change clear: "For the sake of our children and our future, we must do more to combat climate change." After touting the nation's success in producing more oil and natural gas than ever before, Obama outlined an "all-of-the-above" plan which involves reducing pollution and speeding up the transition to sustainable energy, including wind and solar.

Despite his sometimes forceful language, ("If Congress won't act soon to protect future generations, I will"), his "all-of-the-above" approach failed to mention the project climate change activists are most concerned about: The Keystone XL Pipeline. The pipeline is slated to bring tar sands crude oil from Canada to the refineries on the Gulf Coast for sale in the United States and overseas.

Keystone Pipeline Conspicuous by Its Absence

While some like Rep. Lee Terry (R-NE) believe no mention of Keystone XL in the State of the Union "foreshadows doom for the pipeline," TransCanada's CEO Russ Girling seems to believe Obama's decision will be anything but. "I suspect we're looking at anything from a few weeks to a couple of months," said Girling of the expected approval for the project.

Stopping the pipeline, which renowned NASA scientist James Hansen refers to as the "fuse to the biggest carbon bomb on the planet," is the "purest test" of where Obama stands on climate change, says 350.org founder Bill McKibben. And the president can stop the pipeline without a vote in Congress. 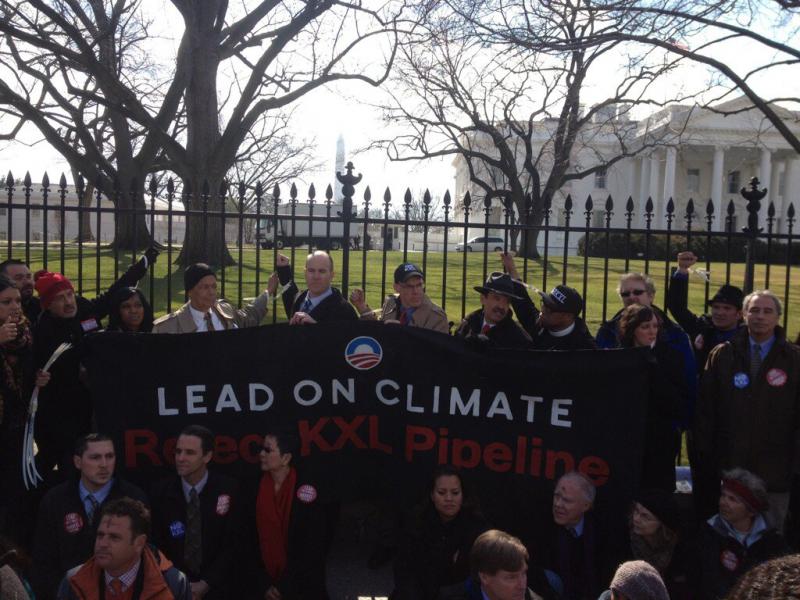 Immediately after the speech, climate change activists turned up the heat. McKibben, and a group including Sierra Club director Michael Brune, former president of the NAACP Julian Bond, and Robert F. Kennedy, Jr., were arrested the next day at the White House. The group blocked the main thoroughfare in front of the White House, with some cuffing themselves to the iron fence around the lawn. After refusing to move when asked by the police, they were carted away by the U.S. Park Police Department.

"We really shouldn't have to be put in handcuffs to stop Keystone XL -- our nation's leading climate scientists have told us its dangerous folly, and the recent Nobel Peace laureates have urged us to set a different kind of example for the world... But given the amount of money on the other side, we've had to spend our bodies, and we'll probably have to spend them again," said McKibben in a statement about the action.

Last year, 350.org organized the largest wave of civil disobedience in the United States since the civil rights era. The 1,200 arrested were successful in delaying key permits for the Keystone pipeline. McKibben's organization is also spearheading a divestment campaign urging universities across the country to divest from the 200 biggest fossil fuel offenders on the planet. Unity College in Maine was the first to officially do so in November of 2012, and since then Hampshire College and Sterling College have agreed to join in the divestment campaign as well. The campaign garnered national attention last week when Al Gore endorsed Harvard's divestment group during a speech he gave at the University. Having served as a board member at Harvard during the push for divestment from South Africa in its apartheid years, Gore stated, "If I were a student I would support what you're doing."

#ForwardOnClimate Set to be Largest Climate Rally in U.S. History

On Sunday, February 17, the day before the Presidents Day holiday, the Sierra Club, 350.org, the Hip Hop Caucus, and other organizers hope to bring over 20,000 people to Washington for the Forward On Climate Change Rally. "It's the tens of thousands who descend on DC this weekend who will push this to the next stage," says McKibben.

Carol Weidel of Madison is taking a train to the rally. Weidel is worried that the president won't take the actions needed to stop the pipeline. "I'm not 100% confident that he'll do it without some pressure from below," says Weidel. Although she is best known as a labor activist, Weidel added, "I think right now the environment trumps all other causes."

Buses will be bringing thousands of people from 25 states to the National Mall. The rally is set to begin at noon on Feb. 17. 350 Madison will be hosting busses from Madison and Milwaukee departing Feb. 16 at 3:30pm from Madison with a 5:30pm stop in Milwaukee. For more information, email 350.madison.wi@gmail.com. To find a bus from another part of the country click here. To learn more visit act.350.org or SierraClub.org and follow #ForwardOnClimate.