Money OUT, Voters IN: Find an Event Near You! | PR Watch

Money OUT, Voters IN: Find an Event Near You! 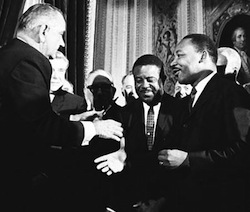 That is why the weekend of January 19, 2013, is so important. That coming weekend marks two dates significant to American democracy. It includes the federal holiday marking the birth of the Rev. Martin Luther King, Jr., which commemorates the civil rights leader who worked to secure voting rights for all Americans. It also marks the anniversary of the devastating U.S. Supreme Court's ruling in Citizens United v. Federal Election Commission, which opened the floodgates for big money and helped make the 2012 elections the most expensive in the history of the world.

On January 19, activists in more than 60 towns and cities across the country will participate in a national day of action through rallies, teach-ins, and conferences to move closer to taking back our democracy.

Join CMD and our allies at the website www.MoneyOut-VotersIn.org to find an event near you. If no event is happening, sign up to create one -- check out the Resources page for a sample press release and sample flyer you can edit for your event, as well as media and planning guides.

Between the flood of money from corporations and super-rich individuals, and new state laws designed to keep people out of the voting booth, the American people are sick of a privileged few trying to drown out the voices of the many.

Learn what actions you can take to amplify your voice and take advantage of this historic moment.

Let's make the third anniversary of Citizens United a moment to remember and one that our representatives can't ignore.