U.S. Rep. Hank Johnson (D-GA) took to the floor of the House of Representatives Wednesday night to criticize the American Legislative Exchange Council (ALEC) for pushing "Right to Work" in Michigan, describing it as politically motivated "crush-the-union legislation" and noting the identical language between the ALEC model and Michigan's law. 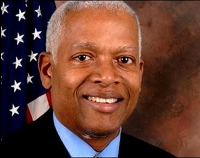 "One month after the landslide election that turned back the corporate money that was arrayed against the Democrats and arrayed against President Obama," Rep. Johnson said, in "a sneak attack [during] a lame duck session with no public hearings, with no committee action," Michigan issued a "blow, to crush unions, to crush collective bargaining [and] the power of individual workers to stand together."

The Michigan House passed two so-called "right to work" bills on Tuesday, which undermine collective bargaining for private sector and public sector unions by allowing workers to opt-out of paying the costs of union representation.

Rep. Johnson noted that the Michigan legislation was taken from the ALEC model "almost word-for-word," and directed citizens to the Center for Media and Democracy's (CMD) PRWatch.org website, where CMD has documented the verbatim language.

"30 days after the election we still have ALEC, and the corporations that fund it, out there trying to crush the middle class and crush the unions," he said.

Rep. Johnson described ALEC as "an ugly lobbying situation, when you put corporations with legislators in a wining and dining setting with the added benefit of campaign contributions." For ALEC's corporate members, the congressman said, "They can't lose."

"What happens when you put a giant with a midget in a cage fight?"

The congressman began his floor speech on right-to-work laws with the internet-meme-friendly teaser, "What happens when you put a giant with a midget in a cage fight?" A midget, of course, would be crushed by the giant's strength.

In a boxing match, Rep. Johnson noted, opponents are evenly matched by weight class. "But we don't have that setup between employers and employees," he said. "Whoever is paying the workers is usually the giant." The National Labor Relations Act, Rep. Johnson noted, "leveled the playing field between the giant and the midget" by promoting unionization.

"How do you go about making it a fair fight? You put 30 midgets in with the giant, and the midgets have a chance collectively."

But the move by Michigan and other right-to-work states limits the ability for collective action and puts the individual midget back in the cage with the giant.

Johnson represents Georgia's fourth congressional district outside of Atlanta. He has been a Member of Congress since 2007, after he defeated Rep. Cynthia McKinney in a democratic primary.

To try to solve the growing gap between the rich and everyone else, @10 (www.at10us.com), is taking submissions for strategies to make society more equitable. Submissions are due January 15th, registered users will vote after that, and results will be publicized in early February. Join us as we solve America's toughest problems.
I don't have the answer to all of the "class gap" problems, but I will say this. ALEC needs to be busted wide open and exposed for what they really are. I know I have done my best to expose them in every forum I have posted on time and time again. I was amazed to learn how many people had never heard of them, on the other hand, they have gone out of their way to exist under the radar for many years. They claimed to be bipartisan which is a joke, because it is a republican anti consumer lobbying outfit as you well know. We must fight fire with fire. Any and EVERY legislator that votes with ALEC legislation MUST be exposed BIG TIME, especially before election time. Every voter MUST be informed who these CREEPS are and their dirty laundry be hung out for all to see. It didn't take long for some of the biggest corporations to run like roaches the minute they were exposed, so exposing these law makers should be job #1. I don't know of a single person who admires ALEC at least publicly, and to tie these lawmakers with them should go a long way to defeating them in the next election. Any new candidate running for any public office should be vetted and exposed for all the public to see. ALEC lists them self as a charity or some kind of non profit and the IRS needs to bust them wide open. It's the only way I know how to defeat them. I understand there are other organizations that are engaging in the same practice that need to be exposed, but ALEC needs to be target #1, and any law maker that endorses their legislation, must be exposed to their constituents as much as possible, and as soon as possible.