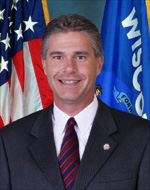 Wisconsin will be a hotly contested swing state in the November 2012 elections and the elevation of Wisconsin Rep. Paul Ryan to the national ticket may have added a new urgency to the efforts to reinstate a new "voter ID" law that makes it harder for Wisconsin residents to vote.

As the Center for Media and Democracy has reported, Wisconsin courts have stood strong against the nationwide push to suppress voting by students, people of color, and the elderly through new restrictions on the right to vote. Wisconsin's voter ID law passed in 2011 and, like many of the dozens of voter ID bills introduced in state legislatures in 2011 and 2012, Wisconsin's law contains elements of the American Legislative Exchange Council (ALEC) model Voter ID Act.

Two Wisconsin judges in recent months have found the state's voter ID law imposes an unconstitutional burden on the right to vote. Despite both judges finding that "voter fraud" is extremely rare but the law's potential for disenfranchising hundreds of thousands of Wisconsin voters very likely, AG Van Hollen is still hoping to reinstate the law, perhaps to help his party in the November elections.

In July, Wisconsin Judge Richard Niess found the state's voter ID law unconstitutional, writing that the law "tells more than 300,000 Wisconsin voters who do not now have an acceptable form of photo identification that they cannot vote unless they first obtain a photo ID card." He also found that obtaining the ID "can easily be a frustrating, complex and time-consuming process" that "can require the expenditure of an amount of money that is significant for an eligible voter who is indigent."

In March, Judge David Flanagan struck down the state's voter ID law as imposing burdens on the right to vote not permitted by the state constitution. "A government that undermines the very foundation of its existence -- the people's inherent, pre-constitutional right to vote -- imperils its legitimacy as a government by the people, for the people, and especially of the people. It sows the seeds for its own demise as a democratic institution," he wrote.

AG Van Hollen is apparently looking to sow those seeds.

On Tuesday, Van Hollen announced that he would be asking the Wisconsin Supreme Court to reinstate the voter ID law before the November elections.

With Wisconsin Congressman Paul Ryan on the GOP presidential ticket and polls showing President Obama with a lead in the state, many have speculated that the move is an effort to help Republicans' electoral chances, as the populations whose voting rights are most restricted by voter ID laws tend to vote Democrat.

Van Hollen also may be interested in giving a boost to Tommy Thompson, Wisconsin's Republican candidate for U.S. Senate. Van Hollen is the honorary co-chair of the Thompson campaign.

Earlier this year, after Judge Flanagan had found the law unconstitutional but while Judge Niess' ruling was pending, AG Van Hollen appealed the cases and urged the intermediate appellate judges to ask the Wisconsin Supreme Court to take the cases immediately. The state's highest court declined the request.

With Tuesday's announcement Van Hollen is repeating his request. That move is puzzling to Lester Pines, an attorney who represents the League of Women Voters, which challenged the voter ID law.

But Pines is not puzzled by Van Hollen's motivations.

"Just as he did in 2008 when Attorney General Van Hollen sued the Government Accountability Board in an attempt to get the voter rolls purged, the Attorney General is trying to suppress the vote in 2012," Pines said.

This unseemly attempt to disenfranchise citizens that may not agree with the views/plans of the GOP, provides a spot light into the desperate fight for relevance of the Republicans. Higher educated minorities within growing ethnic populations, along with an ageing base to support conservative economic fairytales will assure a type of political Darwin process of demise. America's 'Melting Pot' reality will be it's true survival mechanism.