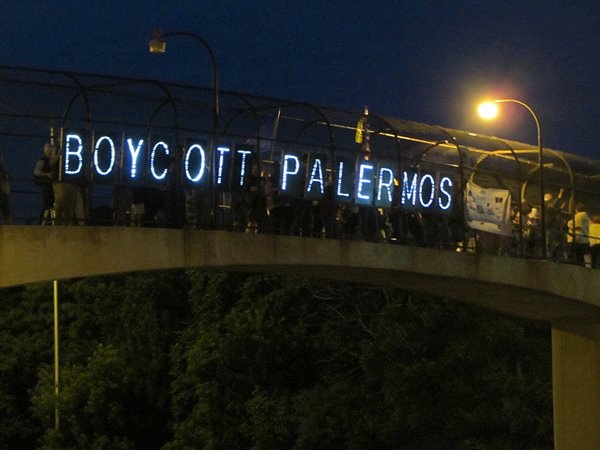 Workers at the Palermo pizza factory in Milwaukee, Wisconsin are entering their fourth week on strike, demanding recognition for a union and demanding the reinstatement of workers who have been terminated for organizing and participating in the union drive. Palermo Villa, Inc. prepares and markets frozen pizza under many brand names across the United States and Canada.

Striking workers are joined every day by supporters on the picket line outside the factory, calling for a boycott of Palermo's pizza until it recognizes the Palermo workers union. Members of the AFL-CIO, Madison Teachers Inc. (MTI), Milwaukee Teachers' Education Association (MTEA), United Steelworkers Union (USW), and others have joined the striking workers, carrying umbrellas to keep the hot sun off their backs as they march back and forth in front of the factory. The "nuns on the bus" who are traveling around the country in opposition to Representative Paul Ryan's austerity budget, also visited the striking workers, sending a message of support and solidarity.

Workers at the Palermo's factory in Milwaukee have been organizing collectively to address issues of workplace safety, sick leave, and violations of fair labor practices since 2008. In the fall of 2011, they launched an effort to create a union, and on May 29, 2012, they filed a petition with the National Labor Relations Board (NLRB) with the signatures of about 180 workers, requesting that their union be recognized by their employer. Workers at the factory organized work stoppages in response to retaliatory actions by Palermo's management, and in an attempt to encourage their employer to recognize their union. Palermo's began to retaliate against those workers who had been organizing, which led the workers to take further action and begin their strike on June 1. Almost two weeks into the strike, the NLRB set a date for an official vote on unionization, which was slated to take place on July 6, but now may be postponed.

Workers started to organize to address workplace safety concerns after a series of accidents, including instances of amputation, that resulted from what they say were unsafe production line speeds and insufficient training. One man had his hands caught in a production line and his fingernails were torn out. He was examined by the company doctor and told to return to work the next day despite his request for further medical attention.

"From my point of view, there's been a lot of exploitation," says Roberto Silva who described being forced to work 70 to 80 hours a week, even while sick, and being threatened with job abandonment when he asked for a break. "You have to work until you can't," Silva told In These Times.

Occupational Safety and Health Administration has fined Palermo's for safety violations twice. Both instances involved a worker having a body part amputated in a workplace accident. 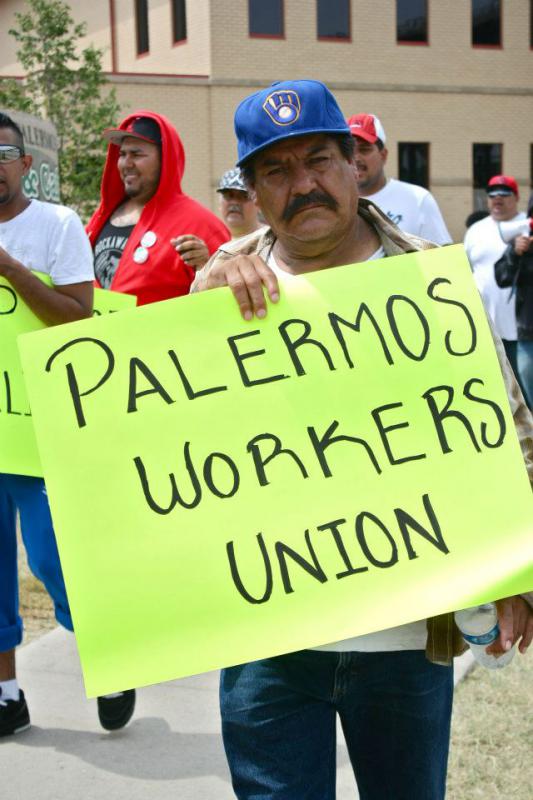 Voces de la Frontera, an immigrant and workers rights group based out of Milwaukee, has been working closely with the largely Hispanic workforce at Palermo's on their concerns for many years.

When it became clear to Palermo that its employees were working towards forming a union, it started to retaliate. According to Voces about 150 workers originally went on strike, and about 25 of them have returned to work since the strike started. The remaining workers who are on strike have all been terminated or suspended indefinitely, with some workers receiving letters saying that Palermo's was accepting their resignation, even though they never submitted a resignation.

To fight the unionization drive, Palermo's hired notorious anti-union firm Jackson Lewis, and sent out notices to dozens of workers on the day they handed in their petition to form a union, saying that Immigration and Customs Enforcement (ICE) was requesting further proof of citizenship.

Palermo's unfurled a professionally printed banner next to where workers are picketing, that said, "A union will not change your immigration status, only the right documents will," in English and in Spanish. ICE confirmed after the strike began that they had suspended any immigration or employment audit at Palermo Villa as a result of the strike, as is their policy, but Palermo's management continues to cite the audit in its communications with the workers.

"No Justice, No Pizza" Support for Workers Growing

The workers have set up a strike fund and have been receiving donations from supporters who have brought boxes of food and other supplies to the picket line. People have also showed their support through a Sign-on petition, started by one of the workers to garner support for the strike, which has gathered over 10,000 signatures. Allies are asking for a national boycott of Palermo's frozen pizzas in order to put added pressure on the company to recognize the union.

At a press conference that Voces held with the workers, Christine Neumann-Ortiz said: "The Palermo workers' struggle is a struggle of national significance. In the wake of the recall election that was bought and paid for by billionaire contributions this struggle reminds us that you cannot buy people's dignity."

Ultimately, the decision on whether to form a union will be decided by the workers themselves. United Food and Commercial Workers recently petitioned the NLRB to intervene in the case on behalf of striking workers. This means the date that workers will vote on unionization has been postponed for now.