Wisconsin Governor Scott Walker asked members of the National Rifle Association (NRA) for "help" and "support" in his upcoming recall election in a speech at the organization's annual meeting on April 13, where he received an award for signing into law two controversial bills: Concealed Carry legislation, which allows people to be armed with concealed guns almost anywhere in the state, and what the NRA calls the Castle Doctrine, but what is more widely known as "Stand Your Ground," a version of which had been cited to prevent the arrest of the man who shot and killed Trayvon Martin in Florida.

The NRA has been under fire in recent weeks for having helped draft Florida's Stand Your Ground law, which had helped Trayvon Martin's killer escape prosecution in Florida, and for bringing it to the American Legislative Exchange Council (ALEC), where its legislative and corporate members approved it as a model for other states. Walker is an ALEC alumni. 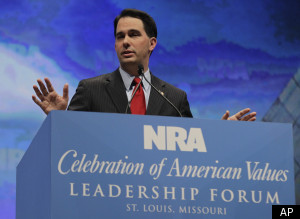 Walker is facing a June 5 recall election after approximately 46 percent of the Wisconsin electorate petitioned for his removal.

Walker's take on the recall effort was that "the advocates of big government view me as a threat. They want to take me out, because I stand in their way of getting their hands on money and power." He did not mention his push to limit collective bargaining, which brought hundreds of thousands of protestors to the Capitol throughout February and March of 2011, and once again claimed that protestors were bussed in from out-of-state.

"If I fail in June, it sets us back at least a decade, if not a generation," he said.

The Wisconsin governor was one of a handful of conservative leaders, including Presidential candidate Mitt Romney, who spoke at the meeting in St. Louis. Walker received standing ovations before and after his speech.

The NRA gave Walker the Harlon B. Carter Legislative Achievement Award, honoring him for signing versions of Castle Doctrine and concealed-carry laws in 2011.

Carter is credited for turning the NRA from a hunter's group into a right-wing political machine.

The so-called "Castle Doctrine" law -- a version of which is known as "Stand Your Ground" -- that Walker was praised for signing has been a hot issue for the NRA in recent weeks, as the original version of that law had been cited by police and others as an excuse for not arresting the man who killed Florida high school student Trayvon Martin. Wisconsin's version of the law has recently by cited to give immunity to a man who shot-and-killed a young man trying to hide from police after attending an underage drinking party.

As the Center for Media and Democracy (CMD) has reported, NRA lobbyist Marion Hammer helped draft the Florida bill in 2005. The NRA's bill went far beyond the traditional right to claim self defense by establishing a legal presumption of criminal and civil immunity when a shooter claims they were threatened, whether in the home or in a public place. Hammer reportedly "stared down legislators as they voted" and stood behind Governor Jeb Bush as he signed the bill into law.

Just a few months later, Hammer presented the bill to ALEC's Criminal Justice Task Force (now known as the Public Safety and Elections Task Force), and the NRA boasted that "[h]er talk was well-received." The corporations and state legislators on the Task Force -- which was chaired by Wal-Mart, the nation's largest retailer of long guns -- voted unanimously to approve the bill as an ALEC model. Since becoming an ALEC model it has become law in dozens of other states, and the number of homicides classified as "justifiable" has dramatically increased.

Scott Walker was a proud ALEC member when he was a state legislator between 1993 and 2002. During that period, he introduced several ALEC-inspired bills, including ALEC's so-called "truth in sentencing" law that has helped prison populations explode, as well as efforts to try to privatize state prison operations.

After becoming governor, Walker signed into law a version of the ALEC/NRA bill that includes provisions that create a legal presumption of immunity for the use of deadly force in one's home, vehicle, and business.

On March 3 of this year, 20-year-old Bo Morrison, who had graduated technical college and enrolled in the Marines, was shot and killed by a homeowner in Slinger, Wisconsin as the young man hid from police on a porch after attending an underage drinking party. Because of the new law, no charges will be filed in the shooting.

Meanwhile, Walker's push for concealed carry has produced a bumper crop of new signs on windows of businesses across the state informing customers that they are not allowed to be armed inside numerous establishments. However, people are now allowed to carry concealed guns into the Wisconsin capitol, at the same time that ordinary citizens are no longer allowed to openly carry and use cameras based on new rules passed by Walker allies.

NRA president Wayne LaPierre also spoke at the April 13 event. He attacked the media for covering victims of gun violence, claiming they are "manufactur[ing] controversy for ratings."

This so called award should be more appropriately named "The Blood On Your Hands Award".
Walker makes me sick. Why did the people of Wisconsin vote to keep him in office. He should be in prison, not the Governor's Mansion! And this moron in Slinger should be locked up in a psych ward and be made to play Russian Roulette 10 times daily, then see how much he likes guns! What kind of asshole shoots a kid for hiding on his porch? And what kind of law enforcement officials and DA doesn't press charges for this? This so-called Castle Doctrine law is ludicrous. It is just the kind of legal loophole that all the morons with guns who are just itching to shoot someone can use to get away with it. "Threat" my ass!